The influence of local governments on growth

On the opposing side, the “government reformists” suggest that fewer local governments can be a means to economic growth. Efficiency forms the core of the argument; however, mechanisms are different. Rather than focusing on competition-induced efficiency, the government reformists focus on potential administrative efficiencies of having fewer local governments. Eliminating duplication of services, overcoming coordination issues, and directly realizing economics of geographic scale are all possible mechanisms to drive growth.

In general, academic research falls more often on the polycentrists side. More local governments can be associated with higher growth or not, and city-county consolidations, a recommended government reform, is generally not related to economic growth. 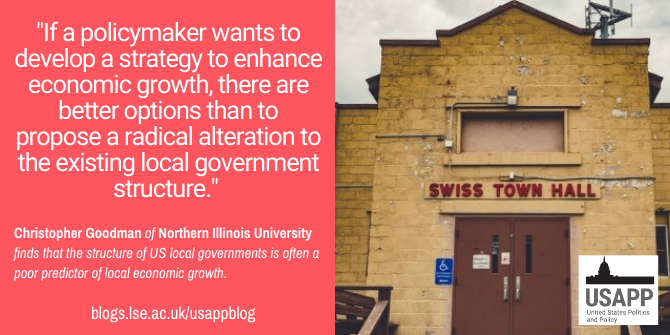 My model includes information on five variables covering local government characteristics. The first three variables are: the share of the total metropolitan population residing in central cities, the average population of suburban (non-central) cities and the share of the metropolitan population that resides in unincorporated areas. These variables measure the influence of general-purpose local governments with higher values associated with lower political fragmentation. The last two measures, the number of school districts divided by the number of non-overlapping cities/townships, and the number of special districts divided by the number of non-overlapping cities/townships, relate to the influence of special-purpose local governments. Higher levels are associated with greater political fragmentation.

Figure 1 shows the influence for my model’s variables with population growth as the dependent variable (results for jobs growth and income growth look similar). Of the general government structure variables, only the share of the central city population has any significant impact. Those metro areas with larger central cities relative to their suburbs declined in population on average, and the size of this effect grows as the period of growth increases. Special district overlap is a positive predictor of metropolitan growth in the longest time range as well. 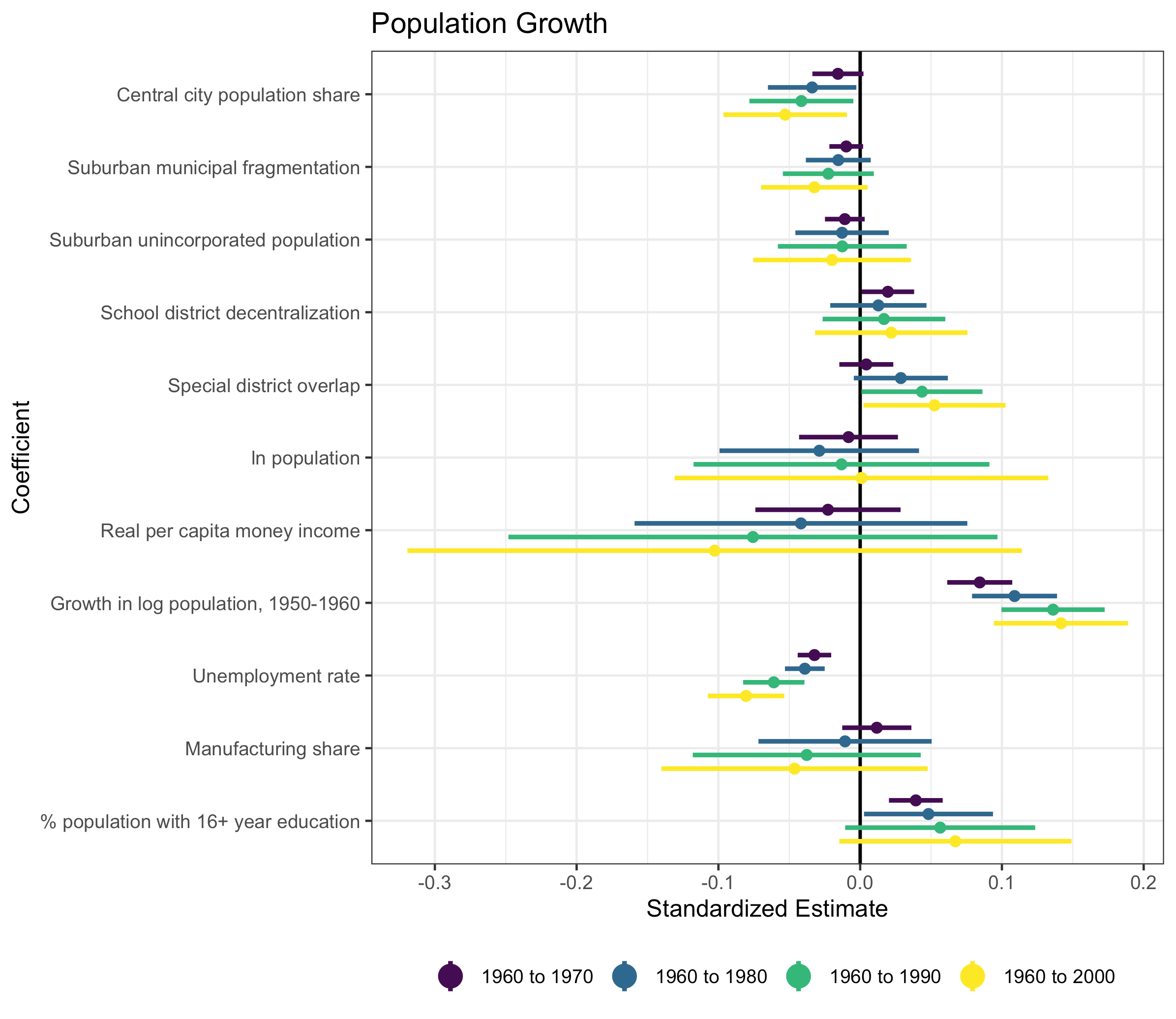 Compared to the other variables, local government structure is a poor predictor of metropolitan growth. Initial economic conditions such as prior growth or the unemployment rate are far better at predicting long-run growth. 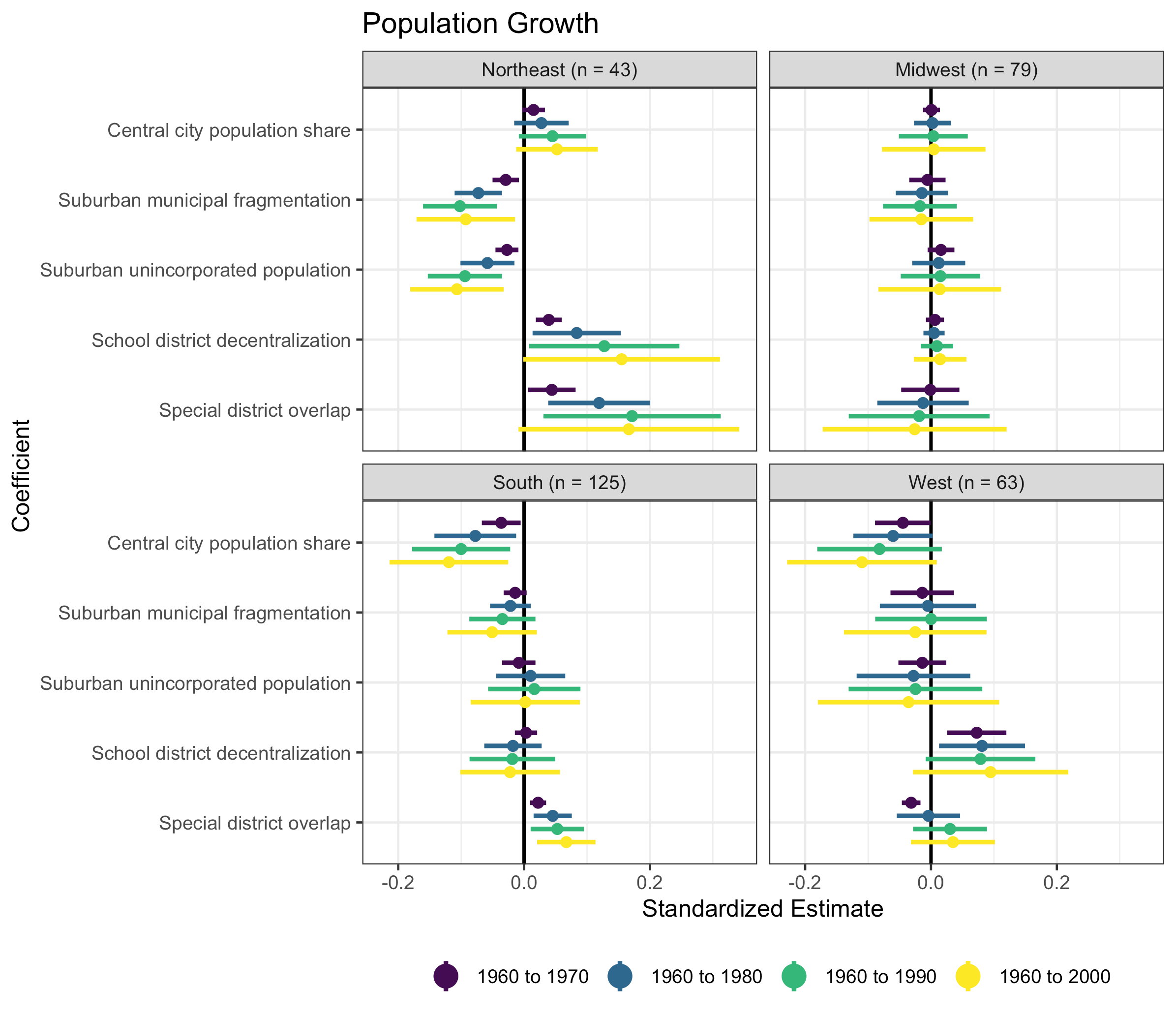 What does all this mean?

Policymakers in the US sometimes claim that the structure of local governments is helping or hindering economic growth in their areas. Some areas are highly fragmented, and it is easy to claim this is a significant impediment (or enhancement) to growth. My results suggest a more tepid response. The structure of local governments can be important, but it is often region-specific and easily overshadowed by the underlying economic characteristics of metropolitan areas.

If a policymaker wants to develop a strategy to enhance economic growth, there are better options than to propose a radical alteration to the existing local government structure. There is more bang for the buck in improving local educational opportunities or working to reduce unemployment.