The Electoral College system used to elect US presidents can sometimes lead to the candidate with the most electoral votes gaining the White House without the support of a plurality of those who voted. Richard F. Potthoff looks critically at a proposed alternative way of electing the US president, the National Popular Vote plan, where all states in an interstate compact which cover 270 or more electoral votes would cast their electoral votes for the candidate who won the nationwide vote, no matter who wins their state. He writes that despite its advantages over the Electoral College, the National Popular vote plan breaks down if one state uses a different voting system from plurality voting – as Maine does, and Alaska will soon do.

Seen as an ingenious means of negating the Electoral College without the struggle of enacting an amendment to the US Constitution, the National Popular Vote plan is intended to elect as president the nationwide popular-vote winner (i.e., the candidate who gains the most votes in the election) rather than the electoral-vote winner. Impetus for it and for otherwise trying to improve the troubled US presidential-election system has increased amid the discords stemming from the 2000, 2016, and 2020 election results.  Long overlooked, however, is the fact that the proposal for the National Popular Vote (NPV) fails to work if just one state chooses to replace plurality voting with another system for its presidential elections. For presidential voting, Maine already switched away from plurality voting for 2020 and Alaska is set to do so for 2024.

How the NPV is supposed to work, but fails

The NPV is based on an interstate compact. Any state (D.C. included) can join. The compact goes into effect once states whose electoral votes total at least 270 (enough to elect a president) have joined. It currently has 16 members whose electoral votes total 195. Each member state agrees to cast its electoral votes for the presidential candidate with the largest nationwide total of popular votes (even if another candidate carried the state). The US Constitution allows each state to decide how to choose its electors, thus enabling use of any voting system for president and also (apparently) enabling use of the compact. The compact provides a way, without amending the Constitution, to bypass the Electoral College and elect as president the candidate with the most popular votes rather than more than half of the electoral votes. Although the compact may or may not be vulnerable to challenges on certain constitutional grounds, one problem for the NPV looms large.

That problem is fatal. NPV assumes, implicitly, that every state’s presidential ballot is based on plurality voting, the traditional and almost universal system in the US where the ballot lists the candidates and the voter votes for one of them. For each candidate, the votes are summed within a state—and then, for NPV purposes (as well as for media reporting), are summed across states to find the nationwide popular-vote winner. But NPV breaks down if even one state uses a system other than plurality voting, as Maine does, and Alaska is soon to do. For a state with any system other than plurality voting, the NPV text does not define how the “votes” to be entered into the NPV nationwide total are to be calculated. Thus, the NPV scheme is undefined both mathematically and legally. The national vote totals that it needs therefore cannot be determined.

For both Maine and Alaska, their presidential voting uses ranked ballots with a method that has gone by several names: Hare (after Thomas Hare); alternative vote; instant-runoff voting or IRV; and, most recently, ranked-choice voting or RCV. Here we prefer Hare and eschew the last two names because they could apply equally to any system that uses ranked ballots. The Hare system works in rounds. It successively eliminates whoever has the fewest first-place votes and redistributes the removed candidate’s ballots as first-place votes to the highest-ranked non-eliminated candidate on each ballot. The process stops when a candidate with more than 50 percent emerges. 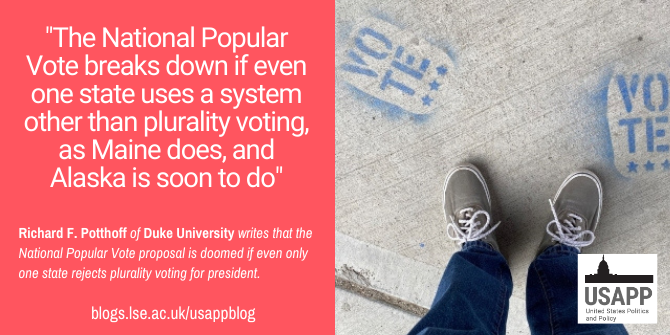 Photo by Phil Scroggs on Unsplash

For a state that uses Hare, would there even be a reasonable way to create the votes to use for the National Popular Vote (NPV)? One way might be to use the first-round first-place votes (which is in conformity with Maine’s 2020 certificate of ascertainment, which identifies the state’s appointed electors for slates for president and vice-president). Aside from the flaw that it would incentivize some voters to vote as they would under plurality voting instead of Hare, this attempted remedy could produce bizarre results, as shown by two examples for Maine. (Although a bit extreme, they were constructed that way for emphasis and may embellish the scale but not the potentiality of the troubles that they portray.) In the first example, the Hare winner among five candidates (or slates) receives 6½ percent of the first-round first‑place votes and thus would garner only 6½ percent of the state’s “popular vote” for the NPV.

The second example has four candidates and relates to Maine’s unusual system where two of its four electoral votes go to the statewide winner and one goes to the winner in each congressional district. In this example, the Hare winners are E in the first district, F in the second, and G statewide—but H has the largest number of first-round first-place votes statewide. Among the four candidates, H would thus have the largest number of ascribed popular votes for the NPV, but the smallest number of electoral votes (0 versus 1, 1, 2) if NPV did not apply. 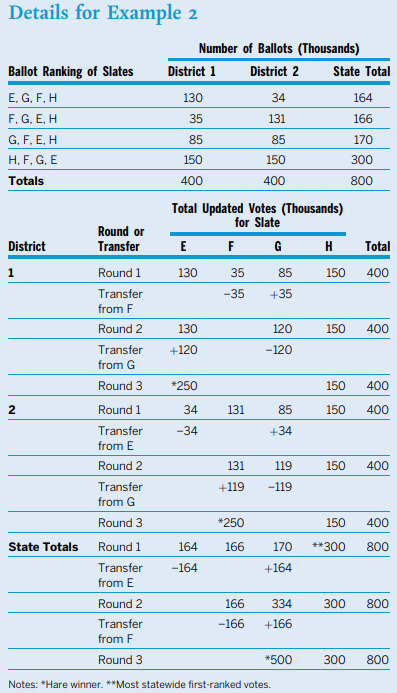 In either example the offbeat NPV results could cause controversy. In a close presidential election, they could generate major disruption.

A second way to use Hare results to create the votes for NPV, provisionally floated recently, would be to set them equal to the last-round Hare votes. That would also be objectionable. For example, in a field of three candidates, the one with the fewest first-round first-place votes could have as much as 33 percent of the total but would be eliminated and receive zero votes for NPV.

NPV could be undermined easily – but there are alternative reforms

Not only NPV’s supporters, but—surprisingly—also its opponents, have failed to identify that non-plurality systems can devastate NPV. Do these failures reflect insular mind-sets that shut out any system except plurality voting?

Even if Maine and Alaska were to switch back to plurality voting, a state with hostile leanings toward NPV could then torpedo it by replacing its plurality voting with another system (not necessarily Hare).

No way to salvage the NPV appears possible.

But other, less-sweeping changes, aimed at reducing polarization, could be pursued at the state level. One would be easier ballot access, both for losers in major‑party primaries and for smaller parties. Another would be to discard plurality voting (a bad system anyway). It could be replaced with a Condorcet system or approval voting, perhaps better choices than Hare.

Richard F. Potthoff – Duke University
Richard F. Potthoff, a mathematical statistician, is a Visiting Scholar in the Department of Political Science and the Social Science Research Institute at Duke University, Durham, NC. His fields of publication include voting theory, elections, other applications in political science, and various areas of statistics and biostatistics.