Democrats have begun 2022 with a renewed effort to pass voting rights legislation. And while President Joe Biden and senior Senate Democrats have been pushing for two key voting rights bills and changes to Senate rules to enable them to pass, they continue to be blocked by Republicans. Julie Norman discusses the context and content of the bills, the options available for Democrats, and what’s at stake.

Why are voting rights an issue now?

The push to ensure voting rights has accelerated over the past year. Following Trump’s unfounded claims of widespread voter fraud after the 2020 election, which Democrats view as directly fuelling the Capitol riot on 6 January 2021, Republican-led legislatures in 19 states have passed 34 laws restricting voting access. Many of these laws, which Republicans maintain are necessary for election security, have focused on limiting measures that were put in place to facilitate voting during the pandemic, including expanded absentee voting, early voting, ballot drop-boxes, and ballot harvesting. At the same time, 25 states have enacted 62 laws with provisions to expand voter access, seeking to make permanent some of the expanded voting procedures that resulted in the highest voter turnout in history. Among this seeming bifurcation of state electoral procedures, Democrats are seeking federal legislation to ensure that certain standards are mandated across all states.

What are the voting rights bills that Democrats hope to pass?

Democrats are pushing for the passage of two key pieces of voting rights legislation. First, the Freedom to Vote Act, would set federal baselines for states in administering elections. Provisions include expanding voter registration by allowing for automatic and same-day registration, guaranteeing voting access by mail-in ballots and early voting, and establishing Election Day as a federal holiday. It also includes provisions to better ensure election integrity and security (potentially of interest to both parties), as well as restrictions on redistricting and campaign finance. The bill was drafted by a group of Democrats including moderate Senators Joe Manchin and Amy Klobuchar, but currently has no support from Republicans, who see it as wresting power from states and overlooking concerns to safeguard elections.

Second, the John Lewis Voting Rights Advancement Act, aims to re-establish federal oversight of election law changes in states and districts with a history of voting rights violations to prevent discrimination against minority voters. It would essentially restore a central pillar of the 1965 Voting Rights Act which was undone in the 2013 Supreme Court ruling, Shelby County v. Holder. However the proposed law would change the formula to determine which states need federal “preclearance” based on transgressions documented during the past 25 years only, in response to the Court’s majority opinion that the old law unfairly punished states for decades-old violations. The bill has bi-partisan support with GOP Senator Lisa Murkowski signing on but would still need an additional nine Republicans to pass under current Senate rules.

Will Democrats change legislative rules to get the bills through?

Despite support from the White House – President Joe Biden is scheduled to give a speech on voting rights on Tuesday in Atlanta – the US Senate is split 50-50 between the two parties, and, because of the filibuster, most legislation requires a 60-vote majority to advance under current Senate rules. As such, Democrats have virtually no chance of passing either bill under the current rules, and indeed, Republicans have blocked Democrats’ voting rights legislation four times previously in the past eight months. With Democrats holding both houses of Congress and the White House, many have been pushing for changes to the filibuster for the past year to enable more legislation to advance by simple majority. Senate Majority Leader Schumer is now betting that the voting rights issue will carry enough urgency and resonance in the party to justify triggering a vote on possible rules changes.

A vote on eliminating the filibuster completely would be unlikely. But Democrats are considering other options to reform the filibuster, including eliminating the 60-vote hurdle to start debate about a bill (while still maintaining the 60-vote threshold to end debate). Other considerations include making the filibuster more onerous by reverting to the “talking filibuster,” requiring senators to actually stay on the floor debating a bill, or carving out exemptions for certain types of bills, including voting legislation. 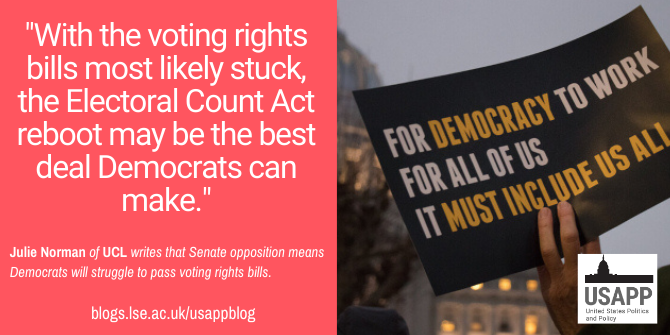 Even these reforms are unlikely to pass, however. Such changes could pass by a simple majority, but would require the votes of all 50 Democrats (with Vice President Kamala Harris as the tiebreaker). Yet moderate Senators Manchin and Kyrsten Sinema have already expressed their unwillingness to make major changes to the filibuster without Republican support. Other Democrats may also oppose the move over concerns of how Republicans could use a weakened filibuster to their advantage when they are next in control of the Senate. However, Schumer sees the voting rights issue as crucial enough to push the issue forward for discussion and get Senators to go on record in a vote, setting January 17, Martin Luther King Day, as a deadline to consider the rule changes.

What are the alternatives?

While the passage of voting rights legislation is unlikely, there are early indications of potential bipartisan support for reforming the Electoral Count Act (ECA), a law from 1887 that outlines the process by which Congress certifies Electoral College votes after a national election. Noting that Trump and his allies were able to exploit loopholes in the existing law, the January 6 House Select Committee is considering changes to the legislation, including defining more specifically when Congress can challenge a state’s slate of electors, and clarifying the role of the vice president in counting votes, provisions that Republican Senate Minority Leader Mitch McConnell is open to discussing.

Some liberals rightly note that the ECA reforms, while laudable, address issues separate from the proposed voting rights legislation. But with the voting rights bills most likely stuck, the ECA reboot may be the best deal Democrats can make, and could ultimately make the most significant difference in safeguarding future elections and preventing another situation like January 6.