In the US, state governments are responsible for overseeing how much freedom local governments have in deciding their budgets. But do states need to put limits on local governments to stop them from spending in ways that are detrimental to their constituents? In new research which looks across all US cities, Mikhail Ivonchyk finds no relationship between autonomy and inflated city budgets. Cities, he writes, can largely manage their own resources without their state’s government looking over their shoulder.

The American Constitution does not mention local governments, which leaves their fate in the hands of the states. Throughout history states have overseen the degree of local autonomy they allow and today no two states in the country treat their local units identically. At the same time, the debates over the appropriate level of local freedom from state restraints and interference have continued since the adoption of the Constitution itself.

The disagreement on autonomy effect: Boon or Boondoggle?

On one side, some argue that greater local autonomy is a necessary democratic principle enabling local policymakers to better meet the needs of diverse local communities. A lack of autonomy can make it difficult for local officials to react to political, social, environmental, and economic changes, it may stifle local creativity and policy innovation. Local democratic processes will keep local policymakers in check and prevent power abuses, excessive spending, and taxation by voting them out office.

Others are skeptical about voters’ ability to control the government. They are convinced that in the absence state-imposed restraints local officials will abuse their taxing and spending authority and use public resources to distribute rewards to their political allies and ensure re-election. Government in this model is akin to an uncontrollable ‘Leviathan’ with expansionary tendencies that over time produce grossly inflated budgets and taxes at the level above and beyond of what is preferred by the voters.

If the first argument is correct and local officials remain accountable to their constituents even when state-imposed restraints are absent, greater autonomy is unlikely to be linked to the level of taxation and spending that is higher than what voters are happy with. In an econometric model that would mean that once socio-demographic community characteristics are taken into account, autonomy will be insignificant. In fact, more autonomy may allow localities to find innovative ways to generate cost savings, which could translate into lower spending, holding other relevant factors constant. If, on the other hand, the supporters of the Leviathan model are correct, more autonomy will be associated with higher levels of spending and taxation holding all else constant.

What does the evidence say?

Empirical evidence from academic research that would test these predictions has been inconclusive and sometimes contradictory. This can be attributed to two major challenges; one is with conceptualization and measurement of local autonomy and the other with the availability of data. There is no one commonly accepted concept of autonomy, and the results may vary depending on what aspect of autonomy is studied. Those who study the topic note that autonomy includes structural (incorporation, annexation, and extraterritorial jurisdiction), fiscal (tax, revenue, spending and debt limitations), functional (services localities can perform), legal (predominant judicial interpretation of pertinent laws) and personnel-related dimensions. Moreover, autonomy is a multidimensional, continuous concept without bright-line boundaries, and it is impossible to use several ordered categories to accurately measure it in all states.

To fully understand the effect of autonomy, all dimensions must be considered together. We know about the influence of fiscal dimensions of autonomy, but other dimensions have been largely ignored and no study have considered them together using individual governments as the unit of analysis. The other shortcoming of existing empirical evidence is that most of it comes from non-random samples of larger cities, so their applicability to most American cities is unclear.

My research seeks to close some of these gaps and uses a dataset on all cities in the United States to test the relationship between municipal autonomy and the level of expenditures, taxes, and debt. The autonomy index is constructed using a rare study of all state constitutions allowing more granular measurement of the dimensions of autonomy such as local discretion (includes unconstrained revenue, fiscal limits and state legal imposition on local structure and functions), local capacity (includes personnel capacity and diversity of local revenue sources) and local importance (significance of local spending and employment to Gross State Product). 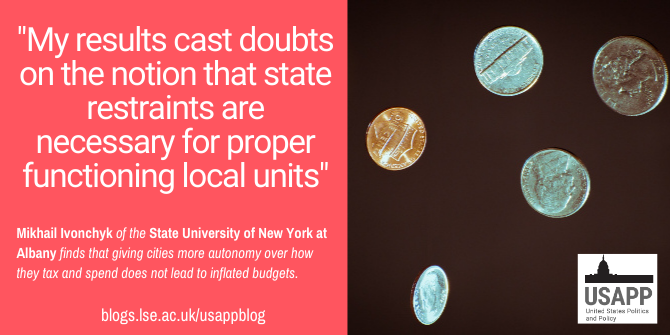 Photo by Chris Briggs on Unsplash

I find no evidence that cities in the states with more autonomy inflate their budgets, increase taxes or issue more debt. If we pick two cities with similar socio-demographic profiles, wealth, and intergovernmental support, the one with more autonomy will likely have the same or lower levels of spending, taxation, and debt. This expectation, however, is not uniform for all city sizes.

Figures 1, 2, 3 illustrate how autonomy effect changes from the smallest (on the left) to the largest (on the right) cities. The dashed line shows the average effect across the entire sample, the dotted lines are 95 % confidence intervals, whereas the solid line represents the autonomy effect at different levels of total expenditures, taxes and debt and the shaded area is its 95% confidence interval.

Figure 1 – Autonomy effect on the level of City Expenditures 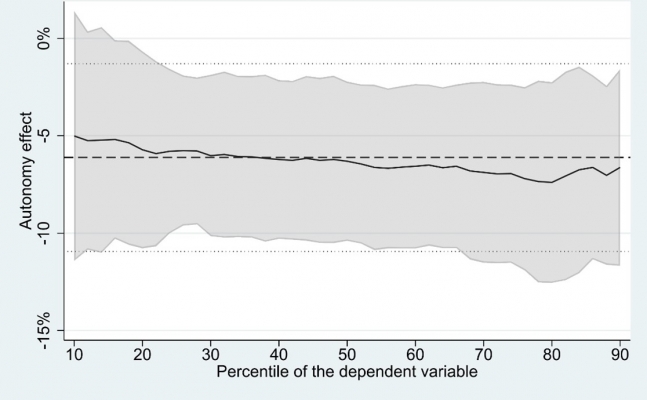 Figure 2 – Autonomy effect on the level of City Debt 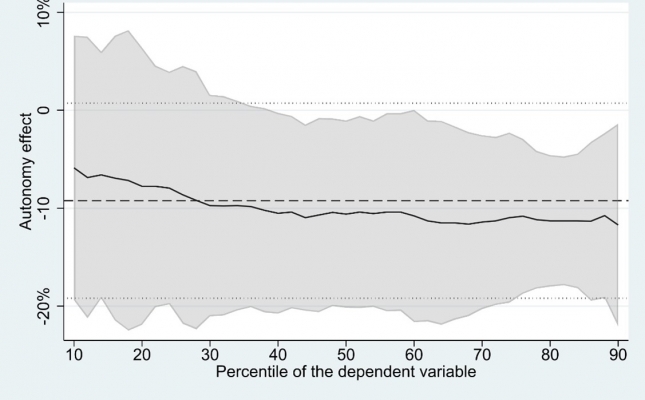 Figure 3 – Autonomy effect on the level of City Taxes 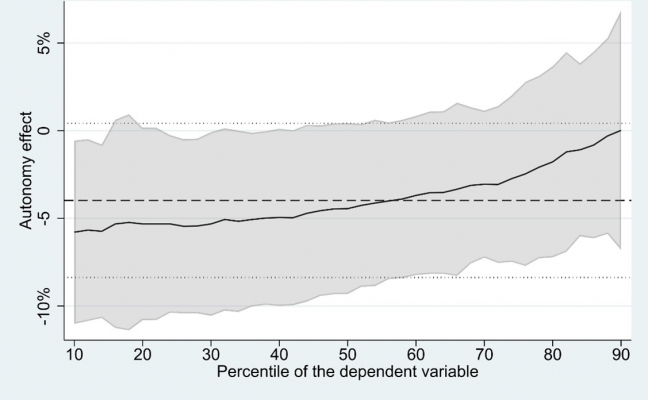 Figure 1 indicates that in the smallest cities expenditures are unlikely to change with autonomy, but the effect becomes negative and more pronounced as we move to larger cities. The relationship is similar with the level of debt shown in Figure 2, where no difference is found for the smallest cities, but significant declines are likely in larger cities with more autonomy. The reverse is true for taxes, however, where smaller cities tend to lower their taxes if given more autonomy, but no significant changes are found in larger cities (Figure 3).

My analysis of all cities in the United States finds no trace of the Leviathan model predicting that more autonomy will lead to inflated budgets. As far as spending, taxes and debt are concerned, more autonomous cities are unlikely to run amok. In fact, more autonomy may be associated with lower spending, taxation and debt holding other relevant factors constant. It is possible that local policymakers with more discretion can find more efficient ways to meet voters’ demands.

Taken together, my results cast doubts on the notion that state restraints are necessary for proper functioning local units. It is quite likely that local politics keeps local officials in check, which, along with the greater responsibility for public services that comes with autonomy, are sufficient to minimize waste and misuse of public resources. This does not mean to say that states should have no role in local affairs. State governments have greater policy expertise and managerial capacities and may need to step in limited circumstances, but it looks like an average city can manage its resources without a state looking over its shoulder.