In Germany’s Russia Problem: The Struggle for Balance in Europe, John Lough argues that Germany’s historically conditioned reflexes have distorted its view of Russia and inhibited its policy approach to this strategic issue. This sharp and insightful account into German-Russian relations is a very timely read for policymaking and scholarly communities alike, writes Andriy Tyushka. 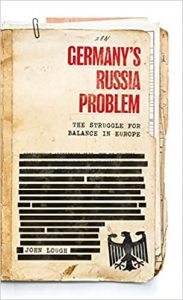 While German self-constraint and paralysis over Russia’s escalation around Ukraine in winter 2021/22 is now being heavily peppered with questions, scandals and accusations, thus risking serious damage to the country’s international image and allies’ trust, it essentially exposes Germany’s greatest strategic issue.  One of a kind, John Lough’s new book does not beat around the bush. It clearly and forcefully hammers home the answer to a hitherto unasked question: yes, Germany has a Russia problem.

Written and published before the first post-Angela Merkel government started settling into power, Lough’s account of Germany’s self-inflicted powerlessness regarding Russia appears truly ominous as Berlin struggles to act on the unwinding spiral of the Kremlin’s escalating demolition of the post-Cold War European security order. As such, the book is a very timely read for policymaking and scholarly communities alike – as a guide into past and persisting German reflexes and policy orthodoxies towards Russia.

Even though many might allege that the argument about the country’s Russia problem is intuitive and self-evident, only a few would be in a position to competently articulate what is at the heart of this problem and what its broader repercussions are. Lough, an associate fellow of Chatham House’s Russia & Eurasia Programme, an experienced think-tanker and a former NATO official in Russia, is among those handful of authors. Speaking both German and Russian and having spent a good part of his career studying conflict and security, he has developed an insightful, sharp, courageous and occasionally ingenious account, which remains elegant and balanced at the same time. 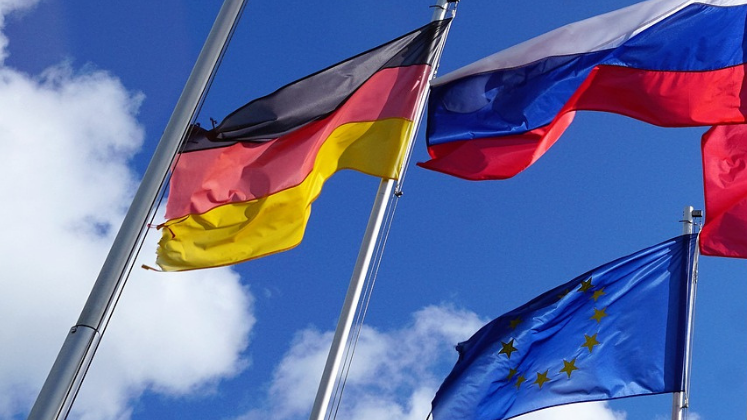 The book’s central argument is that ‘Germany’s historically conditioned reflexes have distorted its view of Russia and continue to inhibit its behaviour’ (245, 14). As clear and straightforward as it is, this argument, strangely, has not yet been duly and widely debated. Unlike other European states or the US, Germany ‘cares about Russia’ and, in many respects, is (mis)guided by the resulting ‘wishful thinking’, Lough argues (3). The crux of Germany’s Russia problem is not so much that it has failed, the author contends; the real problem is that ‘it was counter-productive’ (3). He adds enough new detail and reflections on already known facts and events to make his point.

The second half of the book is devoted to post-2014 developments in German and European Russia policies, while the first half acrobatically traces the roads taken since the seventeenth century, the bridges burnt and rebuilt that altogether have led to the emergence of a German-Russian Sonderbeziehung (special relationship).

Altogether eight substantial chapters help ground Lough’s key argument, with the historical retrospective (Chapter One) and the future outlook (Chapter Eight) logically framing the discussions of the development of the special German-Russian relationship (Chapter Two), Soviet/Russian actual and mythologised roles in German reunification (Chapter Three) and Germany’s failure to read Russia correctly throughout the fifteen years following the fall of the Berlin Wall (Chapter Four). The book also covers the 2014 watershed moment of Germany’s disillusionment with Vladimir Putin’s Russia (Chapter Five) as well as discussions of the economic base of the two countries’ special relationship (Chapter Six) and the largely under-studied aspects of Russian benign and malign influence in Germany (Chapter Seven).

Two chapters – revolving around potent myth-making and myth-breaking moments in Germany’s Russia policy – deserve special attention. Both the ‘miracle of reunification’ (Chapter Three) and the ‘abandonment of illusions’ following Russia’s incursion in Ukraine (Chapter Five) present a vivid picture of how the pathos and the logos in German old-new Ostpolitik (‘Eastern Policy’) do work.

Whereas the weight of history in Germany’s love-hate relationship with Russia is vast (as Lough carefully demonstrates when discussing the many commonalities and contradictions on pages 15-63), the cultural anthropological dimension is no less important. For Lough, traumatic and emotive issues are at the heart of Germany’s Russia problem. A particular German psyche emerged in relation to Russia that conjoins both a deep sense of war guilt and a no less deep sense of gratitude to Soviet Russia for making German reunification possible (89).

Rethinking this momentous national development in a broader context and drawing parallels with the contemporary inflated uses of the ‘generosity argument’, Lough bluntly posits that this claim is exaggerated and politicised (91). Against the backdrop of varying assessments of the role of trauma and emotions in German ‘Eastern Policy’, one thing needs to be duly acknowledged. Lough argues that ‘from the collapse of the USSR in 1991 up to Russia’s annexation of Crimea in 2014, Germany’s Russia policy was remarkably consistent’, resting on ‘the principle of seeking wide-ranging cooperation with Moscow bilaterally as well as through the EU and NATO with the aim of integrating a democratizing Russia into Europe’ (109). The mythology of the old-new Ostpolitik, still cultivated among Germany’s ruling elites, is said to be responsible. The book lays bare this and other roots and reasons behind Germany’s awkwardly persistent continuity in thinking about Russia, in spite of the latter’s profound change both domestically and in its international posture.

The August 2008 Russo-Georgian war first exposed ‘a lack of realism’ in German foreign policy and Russia-thinking (136) and its geopolitical daydreaming. As Chapter Four substantiates, the failure to read Russia correctly for over 25 years, also due to the German loss of political intuition and expertise (153-54), self-deludingly allowed ‘optimism to override realism’ (148), effectively putting Germany in a condition of reality denial.

A cold shower was poured on this when Russia – illegally and illegitimately – annexed Crimea in March 2014. Lough deems Chancellor Merkel’s 13 March 2014 address to the German Parliament as signalling ‘a dramatic change in German policy towards Russia’ (161) and the start of a gradual departure from the conventional clichés about the indispensable role of Russia as a partner in European security.

Even though 2014 signalled a moment of Germany’s disillusionment with Putin’s Russia, the country’s many traumatic and emotive issues keep confining its thinking and acting on Russia strategically, thus imposing an aura of self-inflicted disempowerment. Lough ponders difficult moments of balancing Germany’s ‘illuminated’ thinking on Russia and its self-restricted and inconsistent diplomatic action, whether during the Minsk Peace Protocols negotiation, Germany’s Russia-defensive posture in the Council of Europe or the Nord Stream 2 gas pipeline debacle (175-84). Still, the author admits that (and sympathetically admires how) Merkel had been mastering ‘the art of the possible’ (192) while adjusting Germany’s national policy to present realities. However, Lough does not regard the creeping shifts in Germany’s Russia policy post-2014 as a revolutionary foreign policy turn – for him, they are too sporadic, fragmented and inconsistent to qualify as such.

For Lough, Germany’s diplomacy all too long has been self-deluded by the principle that ‘there is no alternative to good relations with Russia’ (19) – a maxim that had not disappeared from Berlin’s agenda even after Russia’s annexation of Crimea and hybrid aggression in Ukraine’s east. Effectively, it persisted until early 2020, when the Russo-German and the Russo-European relationship considerably deteriorated, thus showing that there actually is an alternative.

Lough’s concluding argument is that it is high time for Germany to ‘correct’ its Russia policy – a plea also recently made by 73 German security experts to their government – as it no longer can afford to be astrategic. ‘Having “good relations with Russia” does not qualify as a policy goal’, Lough righteously reproaches German policymakers (255). After all, its romantic Ostpolitik has not rescued Germany (or Europe) from the congelation of relations with Putin’s Russia, and the post-2014 Frost-politik only reinforced the lasting German (and European) strategic perplexity regarding the issue. This has rendered the sporadic policy responses to Russia as effectively errands of Lost-politik – Germany’s lost ‘Eastern Policy’. In many ways, Germany has now to stand its Russia test and master ‘the art of the impossible’.

Another question begs to be put forward: will Germany’s Russia policy ever change for real (and for good)? In concluding discussions, Lough suggests that progress is indeed possible; furthermore, he shows the early signs of it, while acknowledging its largely ‘partial nature’ so far (248). Recent and unexpected political micro-shifts, triggered by statements from German political elites and leading media outlets (such as Der Spiegel and Die Welt) that Ukraine’s right to self-defence should be respected and Ukraine should be helped, show further signs of gradual change. These developments also neatly feed into Lough’s line of argument, which sees the possibility of change and provides eleven policy recommendations that should help facilitate the overcoming of Germany’s ossified reflexes towards Russia and the inertia of its Ostpolitik orthodoxies (249-53).

All in all, Lough’s account of Germany’s Russia problem is well-written, well-structured and generally convincing. Each chapter has a meaningful concluding section. Some conclusions, however, go far beyond summarising the preceding discussions. For instance, the conclusion to Chapter Five spreads over seven pages (186-92) and starts a number of new threads of analysis. The publisher’s choice of endnotes over footnotes somewhat distorts a deeper reading of the book: the voluminous endnotes spread over 30 pages (257-87) and hide from plain sight valuable primary sources and citations in German, Russian and English. On the matter of substance, the book’s subtitle – ‘The Struggle for Balance in Europe’ – is rather decorative as it is not consistently reflected in the book’s structure or narrative. The author leaves the reader wondering what kind of ‘balance’ was implied: the balance of power, threat, peace or interest? On a positive note, the book’s cover itself communicates more than its subtitle: Germany’s Russia problem is a geostrategic (c)old case.

Certainly, there is no deficit of literature on the indispensable dyad of German-Russian relations. Lough’s book stands out for recognising the early symptoms of what the new German government and its European allies currently have to face: Germany’s Russia problem. In that, Lough’s book is not sensational, but it is all about making sense of Germany being AWOL when Ukraine and the West at large grapple with responses to Russia’s ever-growing belligerence in the region.

Germany’s Russia policy truly is a ‘Waiting-for-Godot’ type of tragicomedy, where hope and hopelessness, illusion and disillusionment, reason and reflex all deeply intertwine. Germany’s Russia Problem astutely explores Germany’s many centuries-old traumatic phobias, romantic fixations, rough disillusionments and incapacitating paralyses in its relations with Russia. It is a crisply and fairly written book vital to our understanding of the nature and progression of Germany’s – and, with it, Europe’s – Russia problem.