The recent US Senate confirmation of Judge Ketanji Brown Jackson for the Supreme Court has shown how politicized such hearings have become. But how do these more contentious hearings influence how the American public thinks about the Supreme Court itself? In new survey research, Miles T. Armaly and Elizabeth A. Lane examine reactions to the US Senate’s approach to filling Justice Ruth Bader Ginsburg’s Supreme Court seat. They find that respondents who were told about the politicization of a past vacancy were less likely to express support for the Supreme Court and to favor reforms which would reduce its power.

Anyone who watched the recent confirmation hearing of Judge Ketanji Brown Jackson will have seen Texas Senator Ted Cruz’s heated line of questioning about race in America, accompanied by blown up photos of children’s books.  Exchanges that involve questioning every aspect of a nominee’s life–from religion to views on sexual identity and child pornography—are not unique to Judge Jackson. However, the intensity of the political discourse does seem to have shifted in recent years. In year’s past, Judge Jackson’s impressive qualifications would be enough to get her confirmed; this is no longer the case.

Supreme Court confirmation hearings have appeared to reach a new normal of a highly publicized and politicized spectacle. On the heels of several staffing controversies —the then Republican Senate Majority Leader Mitch McConnell’s refusal to schedule hearings for Merrick Garland in 2016, Brett Kavanaugh’s emotional and controversial hearing in 2018—Senate Republicans hastily attempted to fill Justice Ruth Bader Ginsburg’s vacant seat in 2020 only weeks before a polarizing presidential election, despite refusing to do so four years earlier.

Can politicized Senate confirmation hearings hurt the reputation of the Supreme Court?

Legitimacy, or the public’s goodwill and trust in the Court to make decisions for the country, is thought to be stable and only waivers after repeated unprincipled actions by the Court. Yet, the politicized spectacle of recent confirmation hearings made us question if actions by another branch of government can damage the Supreme Court’s legitimacy in the eyes of the American public. We set out to ask whether politicized Court staffing procedures, and the polarized behavior of members of the Senate, harm the Court—even when the Court is an “innocent bystander.”

To find out, we surveyed American adults in early September 2020, a few weeks prior to Justice Ginsburg’s death. After Ginsburg died, but before Amy Coney Barrett was nominated to fill the vacant seat, we re-contacted the individuals from the original survey. This timeline is summarized in Figure 1. Because we surveyed the same individuals two times—once before and once after Ginsburg’s death—we can ascertain whether the politicized nature of the vacancy impacted individual views of the Supreme Court.

Our survey respondents were asked a series of questions that measure how legitimate they perceive the Supreme Court to be. For instance, respondents state how much they agree or disagree, on a 5-point scale, with statements like “The Court ought to be made less independent so it listens a lot more to what the people want.” High values on this scale indicate support for an independent, autonomous Court.

As a result of the staffing controversies described above, court-curbing (using legislation to reduce the power of the Supreme Court) was a major topic during the 2020 presidential election. Thus, we asked whether judges in federal courts should be appointed or elected, where respondents, using a four-point scale, could choose “definitely” or “probably” appointed, or “probably” or “definitely” elected. This is a direct measure of Court-curbing willingness. This willingness suggests a need to fix an institution that is systematically broken rather than remedying a single wrong (e.g., Congress passing a piece of legislation overturning a Court decision).

Testing how the politicization of a Supreme Court vacancy affects opinions

Questioning the same participants before and after Justice Ginsburg’s death, we were able to repeat the same questions to determine how this event altered their views. But because there were 24 days in between we cannot simply assume her death is the only possible explanation for changes in attitudes towards the Court. Indeed, the politicization of the vacancy may have also come into play. To determine which aspect of the vacancy bears on evaluations of the Court, we randomly exposed our participants to two stories taken from the news the evening of Ginsburg’s death. The first was a simple description:

The second was the exact same passage as above but with the following printed just below:

Just hours after Justice Ruth Bader Ginsburg’s death on Friday, Senate Majority Leader Mitch McConnell said President Trump’s eventual nominee to replace her “will receive a vote on the floor of the United States Senate.” But four years ago, when Justice Antonin Scalia died in February of an election year, McConnell repeatedly argued against even holding a hearing for a replacement.

Generally, we believe that vacancy “losers” (Democrats) will react differently than vacancy “winners” (Republicans), and that the difference will be more pronounced compared to the simple description. 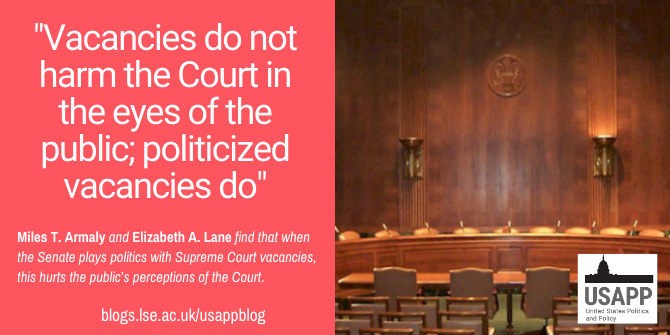 Nomination ‘Losers’ reduce their support for the Supreme Court

Consider Figures 2 & 3, where we examine how exposure to either the Ginsburg or McConnell story influenced support for the Court and judicial elections. Starting on the left-hand side of Figure 2, we see that Democrats exposed to the McConnell story demonstrate less support for the Court relative to both their responses in Wave 1 and to Democrats exposed to the Ginsburg story. Republicans’ attitudes remain unchanged.

Figure 3 shows a similar relationship when considering support for elections. On the left side of the figure, Democrats who were exposed to the Ginsburg story are less supportive of judicial elections, whereas Republicans once again do not change.

Figure 3 – Difference in support for judicial elections between each wave based on participants’ party identification and exposure to treatments.

Our results suggest the Senate’s increased politicization of Supreme Court confirmation hearings harm the Court’s legitimacy. Stated differently, vacancies do not harm the Court in the eyes of the public; politicized vacancies do. Attitudes regarding the Court—often marked by their stability—are impacted by the actions of the elected branches, even when the Court is not hearing or deciding cases. If the new norm of contentious, politicized hearings continues, the Court’s legitimacy may increasingly be threatened. This is bad news for the Court, which relies on the public’s support for the enactment and enforcement of their decisions.

Elizabeth A. Lane – Louisiana State University
Elizabeth A. Lane is an assistant professor of political science at Louisiana State University. She studies American politics with a focus on the United States Supreme Court. Her research focuses on attorneys and the interplay between law and politics and ultimately how these relationships shape justices’ decision making and the public’s perception of the Court.