The US federal government contracts with US local governments to provide immigration detention. In new research Deirdre Conlon and Nancy Hiemstra find that these contracts generate substantial revenues for urban counties in New Jersey, and that county subcontracting for services such as food and medical care can also provide substantial revenues for local businesses. They write that the monetary benefits to counties alongside the potential negative effects for detainees of ending local immigration detention can further entrench the practice.

When the local government of Essex County, New Jersey adopted a new immigration detention contract with the federal government in 2011 that doubled the number of detainees it held to 1250, an elected official noted: “This is a very unpleasant way of getting revenue…But it’s going to be helpful.” This sentiment of “unpleasant” but “helpful” has buttressed the building of the largest immigration detention system in the world, which, according to the US Department of Homeland Security (DHS), has a capacity of up to 60,000 per day and had a federal budget allocation of $3.1 billion in 2021. Republican President Donald Trump’s blustery anti-immigrant rhetoric led the public to understand detention as a conservative initiative, but the US detention infrastructure has grown continuously across Republican and Democrat administrations over the last two decades. Essex County is one of three politically liberal New Jersey counties, including Bergen and Hudson counties, that until very recently have been leading providers of detention in the United States. In 2018, during the Trump administration, these county facilities together were contracted to detain around 2,000 immigrants per day. While US Immigration and Customs Enforcement (ICE) contracts have continued under the Biden administration, we focus on 2015 to 2019, before Joe Biden was elected.

Our research in these counties spans over a decade and shows that the relationships that develop through the detention of immigrants intertwine in ways that become critical for municipal development and contribute to detention’s local entrenchment. Detention falls under the auspices of ICE a federal agency within the DHS. ICE uses many different types of contractual arrangements to facilitate the operation of its immense detention system. These include direct contracts with private prison companies, intergovernmental service agreements (IGSAs) with local governments, and dedicated facilities owned and run by ICE. IGSAs are most common, with over 30 percent of detention facilities operating under such agreements. This means local governments are a crucial component of the detention system.

Detaining immigrants has generated substantial revenue for the local governments we investigated. Money coming in from ICE increased 46 per cent for Bergen, Essex, and Hudson counties from 2015 to 2018, for a total of roughly $6 million per month. In 2018, Bergen County earned $110 per day, Essex County $117, and Hudson County earned $120 per day per detainee held. Faced with mounting anti-detention activism, leaders in all three counties were acutely aware of the economic stakes of immigration detention. Journalist Matt Katz quotes an elected officer in Essex County who defended the contract with ICE by saying, “My job is to keep taxes at a minimum and to bring in revenue.” 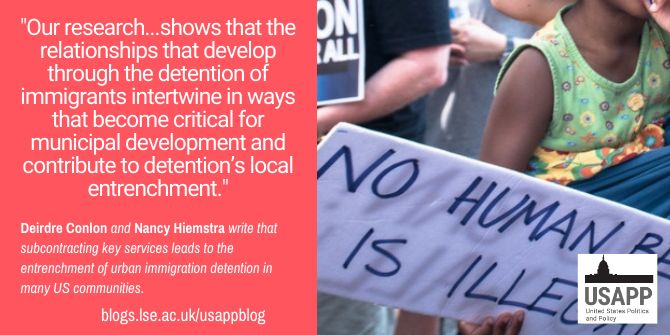 To provide for the basic needs of detainees, as required by the ICE contracts, county governments subcontract with the private sector, pulling different entities into layered financial arrangements. One key subcontracted relationship is food provision. Our research shows Bergen County has a $9 million contract for food service with Aramark Correctional Services for 5 years. Both Essex and Hudson counties hire food service with GD Correctional Services in three-year contracts worth over $16 million and $15 million, respectively. Medical care for detainees is another key subcontracted service. In 2018, both Essex and Hudson County jails contracted medical services with CFG Health Systems; Essex’s contract was worth over $25.5 million (for three years), and Hudson’s was valued at $5.5 million per year. By contrast, Bergen County contracted medical care with multiple smaller entities instead of one umbrella company. Commissary operations—which sell items to detainees at inflated prices—are also contracted out. Our research highlights how, instead of being paid by the county governments, commissary operators pay sale commissions to the counties. Bergen, Essex, and Hudson counties all contract with Keefe Commissary Network. All these companies then in turn subcontract with other companies for supplies and services, which generates substantial revenue for local and regional businesses.

How ending detention contracts can make things worse for detainees

Some of the consequences of these complex relationships are seen in areas that have pushed to end detention contracts including Essex County, where, in April 2021, local government officials voted to end the county’s contract with ICE after years of campaigning by anti-detention groups. The aftermath of the Essex County decision as well as passage of a New Jersey state-wide law passed in August 2021 demonstrate that there may well be increased risk for detainees when state and local governments move to end ICE detention contracts.

After California passed a law prohibiting local governments from expanding or entering into new ICE detention contracts in 2017, ICE transferred detainees formerly in California facilities to distant locations including Colorado, Washington, and even Hawaii, often to districts where court outcomes are less favorable for immigrants. Similarly, as Essex County phased out detention in the months following its decision, detainees were not released but transferred elsewhere. These cases show that moves to end detention in urban areas can be immediately detrimental for detainees. This makes challenging detention politically fraught for activists, advocates, and local governments alike, and may further contribute to the entrenchment of immigration detention in urban areas.

Deirdre Conlon – University of Leeds
Deirdre Conlon is associate professor in human geography, currently based at the University of Leeds, UK. Conlon’s recent work on detention and destitution economies investigates the ways marketization, valuation, and commodification impact immigration enforcement and migrant experience. In addition to an edited collection and several journal articles co-authored with Nancy Hiemstra, Deirdre has published in Annals of the American Association of Geographers (2022, 2020, 2014) and Progress in Human Geography (2018). Conlon is a member of international networks including the Justice, Arts and Migration Network (JAM).

Nancy Hiemstra – Stony Brook University
Nancy Hiemstra is Associate Professor in the Department of Women’s, Gender, and Sexuality Studies at Stony Brook University, New York, USA. Hiemstra’s recent research examines consequences of US immigration and border enforcement policies both within and outside US borders (2019, 2021). Her 2019 book sketches the chaotic US detention and deportation system and traces its geopolitical reverberations to Ecuador. With Deirdre Conlon, Hiemstra investigates economies of immigration detention, through a number of journal publications and an edited volume.