The COVID-19 pandemic saw the introduction of efforts to mitigate the spread of the virus by US state governments, including mask mandates, limits on large gatherings and stay-at-home orders. In new research Richard K. Moule Jr., George W. Burruss, and Chae M. Jaynes look at why members of the public both supported and defied strategies meant to combat the spread of COVID-19. They find that those who saw the virus as being deadly and highly contagious, and who were more fearful of contracting it, were more likely to support and comply with mitigation measures, while those who were cynical about the law, and felt that laws were not legitimate, were less likely to comply with and support these measures.

During the COVID-19 pandemic, governments around the globe began implementing a variety of strategies meant to slow the spread of the virus. Countries closed their borders and ports to international travel and began population lockdowns. In the United States, the Centers for Disease Control and Prevention (CDC) recommended that Americans avoid large gatherings and limit socializing with people outside their homes. Further, public health authorities at all levels of government recommended the public engage in specific mitigation strategies such as avoiding public spaces and maintaining good hygiene practices, such as frequently washing hands.

Months into the pandemic, there was visible resistance to these strategies by the public. Protests in several American cities decried the closure of businesses, mask mandates, and stay-at-home orders as tyrannical and a gross overreach of government authority. Other protesters contended that COVID-19 was fake and that government officials vastly overstated the threats it posed to public safety. Several prominent public stakeholders and media figures reinforced these protests and skepticism. The debate about the appropriate response to the pandemic was exacerbated by a lack of scientific consensus regarding mask use by the public. In the early days of the pandemic, the CDC argued against the widespread use of masks by the public in part to save reserves for front-line health workers. This advice changed later when mask supplies improved; wearing masks in was later mandated when using public transportation and entering many businesses.

Why did the public support and resist COVID-19 mitigation strategies?

First, we drew from perspectives on behavior which emphasized the emotional response to potential consequences and evaluations of risks associated with non-compliance with mitigation strategies. In the context of COVID-19, we considered instrumental factors such as fear of the virus, its perceived lethality, and the perceived certainty of contracting it. We anticipated that individuals who evaluated the virus as deadly and highly contagious, and who were more fearful of contracting it, would be more likely to comply with mitigation strategies. This line of thinking about public health issues has broad empirical support under protection motivation and deterrence theories.

Second, we drew from perspectives that emphasize individual beliefs about rules or laws affecting compliance with authority. We focused specifically on normative beliefs relating to legal cynicism – the idea that laws are seen as not reasonably protect peoples’ interests. Cynicism encompasses ideas such as antipathy toward the law, perceptions of corruption, and low legitimacy of the law. Individuals who are more cynical toward the law are less likely to comply with it, and we expected that this would also be the case concerning compliance with mitigation guidelines.

We evaluated these perspectives for understanding non-compliance with COVID-19 mitigation strategies using a nationwide sample of roughly 600 American adults surveyed one month into the pandemic (mid-to-late April of 2020). By this point, COVID-19 had spread across the United States, and many states had begun implementing mitigation strategies. At the same time, the nation was struggling to develop an effective COVID-testing infrastructure and secure adequate personal protective equipment for medical professionals.

We found that many respondents supported mitigation strategies. For example, roughly 80 percent of respondents supported the implementation of mask mandates and limiting large gatherings in public spaces. We similarly found that most respondents were striving to comply with mitigation strategies, including maintaining social distancing, washing hands for at least 20 seconds, and only leaving home for groceries and medicine. Over 80 percent of respondents reported engaging in these behaviors either “often” or “always.” 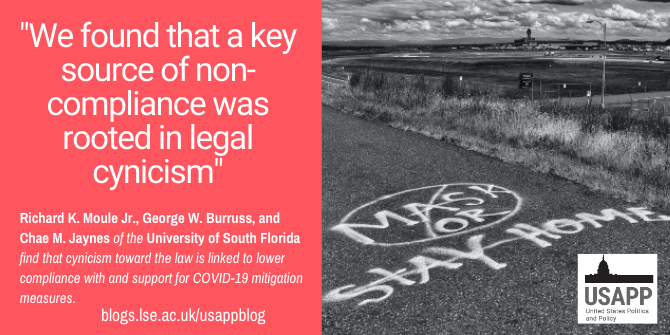 Photo by Kevin Butz on Unsplash

Recall that we were interested in two perspectives to explain engaging in public health practices during the pandemic—normative (legal cynicism) and instrumental (health concerns). Legal cynicism increased defiance of COVID-19 mitigation strategies: those more cynical toward the law were less apt to follow these recommendations. In contrast, individuals who were more fearful of contracting COVID-19 and who perceived the virus as being more severe were more likely to comply with these strategies. Thus, both one’s interest in self-protection and one’s respect for authority were responsible for the public’s reaction to the threat of COVID-19.

… but legal cynicism reduced support for these strategies

On the one hand, these findings are promising. In the early stages of the pandemic, most respondents supported policies meant to limit the spread of the coronavirus and complied with government-recommended mitigation strategies. One of the underlying factors related to compliance with mitigation strategies was the perceived threat associated with the virus. On the other hand, we found that a key source of non-compliance was rooted in legal cynicism. Thus, authorities would do well to communicate public threats honestly and clearly, mindful of how the public receives the messages. Our study did not explore the roots of legal cynicism, so it could be that it existed already in some Americans, which in turn affected the public health response in an already polarized political atmosphere.

Overall, given the likelihood of another pandemic occurring, policymakers and political stakeholders need to better understand the factors that contribute to non-compliance with these and other public health guidelines.