In The Nutmeg’s Curse: Parables for a Planet in Crisis, Amitav Ghosh explores the spice nutmeg as a parable for our contemporary climate crisis, showing how human history has always been entangled with earthly materials. Offering a lucid call to action that seeks to inspire a collective response to the crisis, this book is urgent reading, writes Shaan Kashyap.

The Nutmeg’s Curse: Parables for a Planet in Crisis. Amitav Ghosh. University of Chicago Press. 2021. 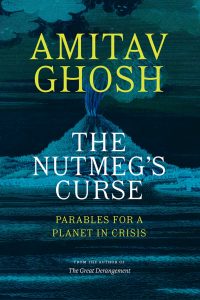 Ever since the Intergovernmental Panel on Climate Change (IPCC) released its First Assessment Report (FAR) in 1990, ‘colonialism’ was sweating it out to be documented by it. In 2022, the word finally made its way into the IPCC’s Sixth Assessment Report. The two reports of the working group that examines the consequences of climate change on people identified colonialism not only as fanning the flames of the climate crisis, but also as an unremitting problem that is aggravating communities’ exposure to it. Amitav Ghosh’s thick description of the issue in The Nutmeg’s Curse could not be more timely.

In his previous work The Great Derangement, Ghosh questioned our collective imaginative failures in the face of global warming. Through his interrogative and illustrative descriptions, ranging from literary fiction to history, Ghosh wondered how ‘our’ thoughts on human-induced climate change and the urgent collective action it requires may not be compatible with our contemporary modes of thinking. Concurrently, he summoned a call for action, arguing that this will make more noise if literary and artistic echoes are put into play to spread the word on climate change.

Ghosh returns to do the same in his latest book. In The Nutmeg’s Curse, Ghosh recounts the histories of Western colonialism through the nutmeg. Yes, the spice that was originally found in the Banda Islands of Indonesia and has since travelled far and wide at the hands of trade and commerce to be present in kitchens across the world. What comes out of this fairly familiar trope of exploring a global commodity like nutmeg is a critical history of colonialism and capitalism that has been frequently told. What Ghosh makes fresh about this story is mostly due to the ‘time and space’ he is writing in – the Anthropocene.

So, for instance, in the first chapter titled ‘A Lamp Falls’, we are not only introduced to the Dutch East India Company, islanders’ resistance to it and the subsequent devastation of the Bandanese people in seventeenth-century Indonesia. Ghosh further complicates the narrative. The Banda Islands are shown to have been sitting upon ‘one of the fault lines where the Earth shows itself to be most palpably alive’ (7). This refers to how the islands and their volcanoes, such as the active Gunung Api, are an integral part of the Circum-Pacific Belt which is a path along the Pacific Ocean characterised by active volcanoes and frequent earthquakes. Ghosh thereby evokes geology in his narration of colonial histories.

Ghosh remains finely sensitive to the life sciences as well, especially botany, when he talks about the ‘trees and their offspring’, adding how they ‘were of very different temperaments’. ‘The trees were home-loving and did not venture out of their native Maluku until the eighteenth century. Nutmegs and mace, on the other hand, were tireless travelers’ (8). This kind of description almost reworks some form of animism in which ‘non-humans’ are delineated with agency. 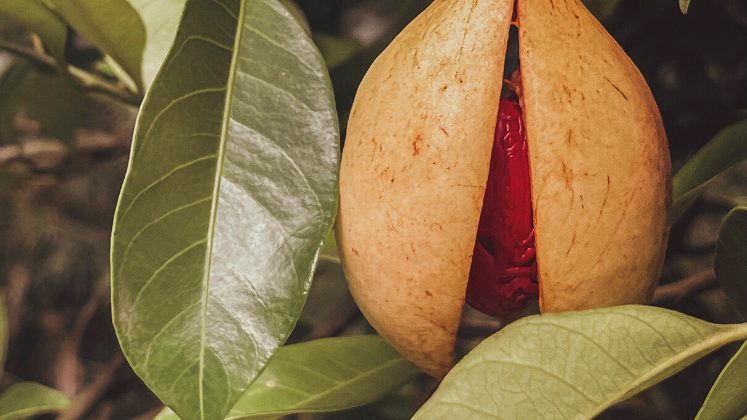 Ghosh also uses ‘planetarity’ to animate details. Consider how he describes the nutmeg: ‘Like a planet, the nutmeg is encased within a series of expanding spheres’ (10). He then proceeds to peel off the layers of the nutmeg to light up an analogy with Earth’s atmosphere. What is at play in all these brilliant moves is the evocation of agency. The author underlines that ‘Humanity is being so closely entangled with the products of the Earth that the past cannot be remembered without them’ (91). He calls for us to reevaluate the belief that ‘resources or commodities’, as we usually know of things such as the nutmeg, ‘have no world- or history-making powers of their own’ (91).

Yet, the author remains alert to the predicaments of the geopolitical order, which come out in stark detail when he talks about ‘non-renewables’ as ‘resources’. When he puts James Lovelock’s Gaia hypothesis to work, his dilemmas become evident. The first half of the book arguably emerges as an attempt to supplant simplified histories of colonialism with the complexities of geology and botany; conversely, the writing of ‘commodities’ as having their ‘own histories’ in the second half ultimately seems to fall back on the same distinction made by R.G. Collingwood. Collingwood differentiated between human history and natural history by remarking that ‘all history properly so called is the history of human affairs’. This has been recently challenged and reworked by Dipesh Chakrabarty in The Climate of History, but Ghosh still seems to have gone with the conventional distinction between natural history and human affairs. This is likely because Ghosh misses out the problem of scale when it comes to the climate crisis.

The time scale in which Ghosh works is a fairly recent one, going back some three or four centuries. By writing a history of colonialism, he falls back on the choices of the present that repetitively ask the same question: who is responsible for climate change? Of course, it is human-induced and anthropogenic, as even the policy documents testify. But on what scale and through what measures? Even while using the concept of Gaia frequently, Ghosh fails to show how the living organisms on the planet interact with their surrounding inorganic environment to configure a synergetic and self-regulating system that originally created the climate and biochemical conditions sufficient and responsible for creating ‘life’ on this planet. This is because Ghosh, while pursuing a global politics of vitalism (the belief that living beings have a vital force), still holds humans closest to his heart. A book that makes the case for a ‘planet in crisis’ intentionally emphasises human parables alone.

Colonialism leading to climate change through resource exploitation is not a new story. Historians, whether writing their imperial, anti-colonial, postcolonial or global histories, have remained conscious of this fact. However, they have faced the same problem that scientists do. Naomi Oreskes, an earth scientist and historian of science, once reminded us that despite the scientific consensus on climate change, the communication aspect is always an issue. Scientists coming to a consensus on the reasons for human-induced climate change does not necessarily mean that the message circulates.

We therefore rely on artists, authors, filmmakers and communicators to spread the message. The contribution of Ghosh is meaningful in that respect. His ‘non-fiction’ reads as much more lucid and obstacle-free than academic offerings that usually fail in communicating a call to action that would cement a collective response to crisis. Ghosh concludes: ‘It is essential now, as the prospect of planetary catastrophe comes ever closer, that those nonhuman voices be restored to our stories’ (257). This is precisely how The Nutmeg’s Curse becomes urgent reading.