Neighborhood violence is a reality for many children in American cities. With violent crime, including homicides, on the rise since the COVID-19 pandemic, gaining a better understanding of the consequences of urban violence on academic performance becomes an important issue. In recent work with Amy Ellen Schwartz, Johanna Lacoe, Patrick Sharkey, and Ingrid Ellen, we analyze data on homicides and aggravated assaults and education from New York City – the largest school district in the United States – to show that repeated exposure to nearby incidents of violence has a negative effect on the reading test scores of public school students in elementary and middle school.

Does exposure to violence sensitize or desensitize children to further violence?

Repeated exposure to neighborhood violence could affect children in different ways. On the one hand, children may become sensitized to violence so that each additional incident of violence has a greater impact among children in the most violent communities. On the other hand, students may become desensitized to violence so that each new violent crime has a modest or negligible effect on children within the most violent settings.

While plenty of research has shown an association between neighborhood violence and worse school outcomes, whether children are sensitized or desensitized to violence remains uncertain given that prior studies have only found correlations, and the evidence of mixed findings. Indeed, isolating causal relationships and estimating the effects of chronic or repeated exposure to crime is difficult. This is because children that live in the most violent neighborhoods are likely different than – and therefore not comparable to – children who live in safer areas for a variety of reasons such as possible exposure to other environmental stressors, differing backgrounds, or other unobserved factors. Our work overcomes this limitation and can provide credible causal evidence of the negative academic effects of repeated neighborhood crime, thus helping answer the question of whether children become sensitized or not to violent environments.

To investigate this question, we use detailed data on violent crimes (homicides and aggravated assaults) in New York City from 2004 to 2010 from the New York City Police Department (NYPD). We geocode this data to a blockface – a street segment between two intersections – and then match to student-level data. The student-level administrative data from the New York City Department of Education (NYCDOE) means that we can know if a student lives on a blockface in which there has been a violent crime, and includes a large complement sociodemographic information, as well as students’ test scores on the two annual standardized exams in English Language Arts (ELA) and mathematics. Thus, we are able to identify if there was a homicide or aggravated assault on a student’s block before they took a standardized test. We consider students “exposed” to violence if they live on blocks in which a homicide or aggravated assault occurred. We do not assume the student witnessed the crime, was a victim, or knows a victim. Because homicides and aggravated assaults are such serious offenses our assumption is that students would have heard or know of the crime, for example, through increased police activity. 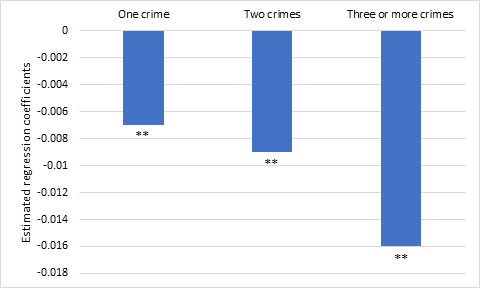 While these results suggest children become sensitized to violence, we can’t necessarily say this for sure if there are still unobserved or unaccounted for factors that may confound the relationship between crime and test scores, such as exposure to other environmental stressors. We turn to an alternative approach that allows us to more clearly isolate the causal effect of chronic violence. Similar to prior work, we compare the test performance of students living on a residential block in which there was a homicide or aggravated assault in the week before the test with students living on blocks in which there was also a homicide or aggravated assault but that happened in the week after the test. This strategy identifies an acute effect of crime and should produce causal estimates given that whether a violent crime happened on a student’s block in the week before or after the test is effectively random. In other words, whether a student was “exposed” to violent crime one week before or after the standardized test is not explained by their background or other neighborhood stressors. 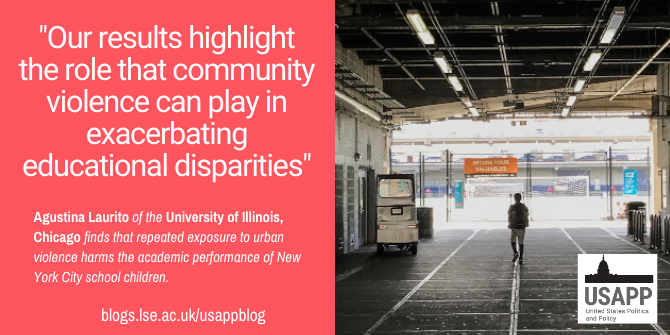 Photo by Troy Adam on Unsplash

As Figure 2 below shows, the acute effect of violent crime is largest among students with two or more prior exposures. Among this group, those exposed to a violent crime in the week before the test score 0.038 standard deviations lower in ELA exams compared to students exposed after the test. Further analyses show that this acute effect is largest for students who are Black – their test score losses in ELA are almost one standard deviation. These results amount to 17 percent of the Black-White test score gap in our sample. Interestingly, we find no statistically significant acute effects of violence on math test scores. This aligns with prior work using national data and data from New York City.

Figure 2 – Regression estimates, exposure to violent crime in the week before the ELA test, stratified by the number of prior crime exposures 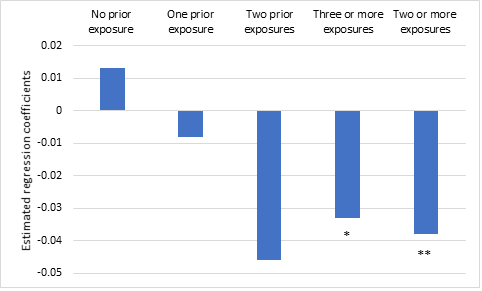 Our analyses show that students who live in the most violent neighborhoods become sensitized to violence and their academic performance suffers. Our results highlight the role that community violence can play in exacerbating educational disparities. To put our effect sizes in context, these are comparable to the positive findings associated with class size reductions. This suggests that neighborhood crime could have the potential to undermine the positive effects of some educational interventions.

School authorities and teachers may consider paying special attention to the role that chronic violence plays in shaping academic performance and identify ways to best support students from the most violent communities. For example, prior work shows the importance of school climate as a moderator of the effect of neighborhood violence; schools may want to take actions to foster more welcoming and safer school environments to help students who are repeatedly exposed to violent crime in their communities.