With the US Supreme Court likely to soon announce its decision to overturn the Roe v. Wade decision, in a new study, Melissa N. Baker and Kayla S. Canelo look at how previous accusations of sexual misconduct toward judges might affect the public’s perception of their ability to rule on issues related to women’s rights. They find that people perceive judges who have been previously accused of sexual misconduct are more of a threat to the rights of women, and that only women felt that such judges would be less likely to rule fairly on women’s rights cases.

Any day now, the US Supreme Court will announce its decision on Dobbs v. Jackson Women’s Health Organization, a case with potential to overturn Roe v. Wade and Planned Parenthood v. Casey.  A highly publicized leaked draft of the opinion suggests the Court is ready to overturn the guarantee of abortion rights, with Justice Alito stating, “We hold that Roe and Casey must be overruled.” While much of the focus has understandably been on the impact of a conservative Court in influencing public opinion, another dimension is at play. Two of the sitting Supreme Court justices joining Alito’s majority opinion (Thomas and Kavanaugh) were openly accused of sexual misconduct during their confirmation hearings. When Justice Kavanaugh was confirmed in 2018, concern was expressed that his position on the Supreme Court would be a threat to the rights of women because of allegations of sexual assault. The Women’s March organization said his confirmation hearings, “will be seen by women as a war on survivors of sexual assault,” suggesting that continued attacks on women were imminent.

Our research addresses whether such allegations influence people’s perceptions of whether women’s rights are jeopardized when people with such accusations are considered for positions of judicial power. How does the public view controversial judges in their professional capacity, especially on women’s rights? We find that people who read about a nominee who has been accused of sexual misconduct viewed the nominee as a bigger threat to the rights of women than people who read about a nominee who had not. Additionally, women viewed nominees accused of sexual misconduct as less able to rule fairly on cases involving the rights of women, a finding that did not extend to male respondents. 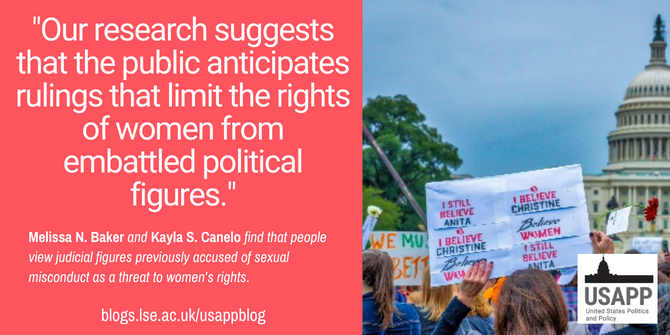 “Believe Women Vs Kavanaugh” (CC BY-SA 2.0) by Mobilus In Mobili

Figure 1 below shows responses to the first question, whether the nominee poses a threat to the rights of women. The bar on the left represents the male judge who was not accused of sexual misconduct, while the bar on the right represents a male judge who was accused of sexual misconduct. Those who read about an accused judge were more likely to state he was a threat to women’s rights compared to those who read about an unaccused judge.

Figure 1 – Accused vs. unaccused judge on whether they’re a threat to the rights of women 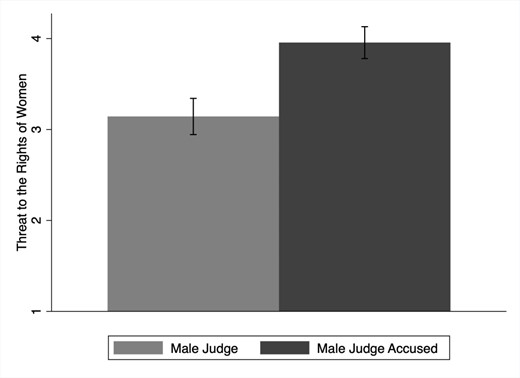 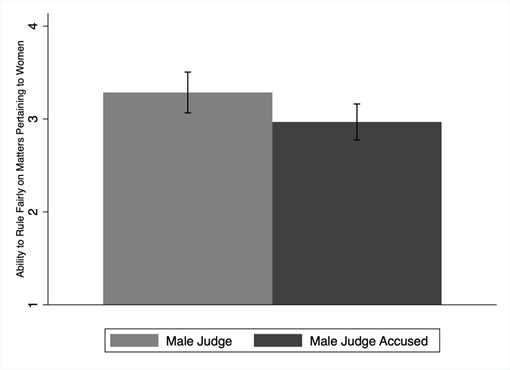 Misconduct allegations can affect support for the Supreme Court’s decisions

Our research suggests that the public anticipates rulings that limit the rights of women from embattled political figures. i.e., they view decisions such as Dobbs as another slight to women instead of a decision based solely on constitutional considerations. Further, our work demonstrates gendered differences in how misconduct allegations taint the legitimacy of specific people and institutions in politics.

In tandem with prior research that has found the public is more supportive of judicial decision-making that is grounded in the law as opposed to personal circumstances, our research also has implications for public opinion fallout post-Dobbs decision. If the public does view Justices as a threat to the rights of women because of their personal histories and sees a Dobbs ruling that overturns Roe and Casey as an extension of their personal histories, the public will be less supportive of the decision.

Melissa N. Baker – University of Toronto
Melissa N. Baker is a Postdoctoral Associate at the University of Toronto in the Policy, Elections, and Representation Lab (PEARL) associated with the Munk School of Global Affairs and Public Policy and the Department of Political Science and incoming assistant professor at the University of Texas at El Paso. She studies political psychology with a focus on political cognition and public opinion. Her research has been published in political science, psychology, and biology journals.

Kayla S. Canelo – University of Texas at Arlington
Kayla S. Canelo is an assistant professor of political science at the University of Texas at Arlington. She studies American politics with a focus on judicial politics and public opinion. Her research has been published in the Journal of Politics, State Politics and Policy Quarterly, Presidential Studies Quarterly, American Politics Research, and Journal of Empirical Legal Studies.