Traditionally in elections people vote for candidates that they like. But in recent years, surveys have show a growing number of people cast their votes against candidates rather than for them – as many as one third in the 2020 election. In new research, Diego Garzia and Frederico Ferreira da Silva find that those who have a less positive feeling about the political party they usually identify with are more likely to vote against a presidential candidate compared to those who feel more strongly partisan.

When we consider how people decide about who they should vote for, we tend to think about their choices as the expression of support for a given party or candidate. Yet, many citizens interpret their vote choice as being mostly “against” rather than “for” a party or candidate. Following the 2020 US Presidential election, about one third of respondents from our survey of the American voting population stated that they voted against a presidential candidate. This behavior, known as negative voting, has been studied intermittently since the 1960s. These studies have seen negative voting as a reaction to incumbent performance, making it a special case of retrospective voting in elections involving incumbents, or as a rationalization to reduce people’s discomfort when they have conflicts between the political party they support and their beliefs or ideologies.

Our new work proposes a novel take on this phenomenon, and considers that negative voting in recent elections is a product of the increasing dislike people have for those from the ‘other’ political party (while feeling positive about their own party, known as affective polarization). Numerous studies have documented the growth of this affective polarization in the American electorate. The literature on negative partisanship has begun examining the potential electoral implications of when people feel hostile to those who support the “other” party. Anchored on extensive research on social psychology which demonstrates that negative attitudes and identities can develop independently from positive ones, these studies have shown that there is a relationship between negative out-group identities, and political attitudes and voting behavior, even when controlling for positive identifications. Other studies have shown that negative attitudes can link not only to political parties but can also target political candidates. Drawing on these findings, our work examines whether negative voting can be understood as what happens in elections when people become highly hostile to out-group parties and candidates in the context of a highly polarized American electorate. 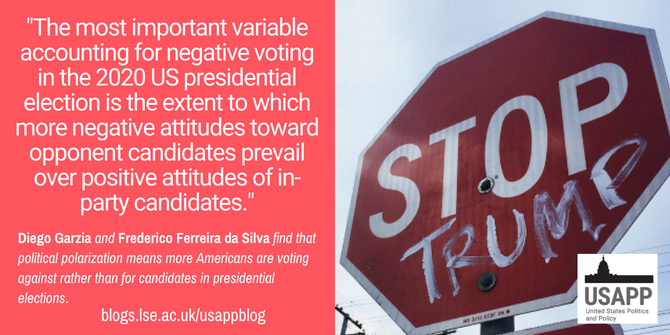 Why voters vote against candidates

Our findings show that, while negative voting rates in the latest election are not higher than reports from previous studies, the factors explaining this type of voting behavior may have changed considerably. The most important variable accounting for negative voting in the 2020 US presidential election is the extent to which more negative attitudes toward opponent candidates prevail over positive attitudes of in-party candidates. The more this is the case, the more likely individuals are to cast a vote against. The likelihood of negative voting is higher whenever hate for an out-candidate outweighs love for an in-candidate, while party-based considerations appear less related.

Independents are more likely to vote against

On these bases, the consequences of polarization and growing negativity in American society and politics do not fall exclusively upon partisans. Independents are similarly vulnerable to negativity, yet with the aggravation of this not being counterbalanced by affection for an in-group – a factor which we have shown to be an important determinant in reducing negative voting.

The fact that, even in the extremely polarized context of the 2020 presidential election, 70 percent of voters from our sample are not negative voters is at least somewhat reassuring. However, we have not been able to quantify how many citizens decide to abstain from voting because of their negative views of parties and their candidates. We can think of negative voting as a behavioral option to voice discontent with what voters might consider to be a poor choice of candidates, but if even more citizens instead resort to an exit strategy and decide not to vote for these reasons, we may have uncovered but the tip of the iceberg.

Diego Garzia – University of Lausanne
Diego Garzia is an SNSF Professor of Political Science at the University of Lausanne. He currently serves as founding convenor of the ECPR Research Network on Voting Advice Applications and as a member of the Scientific Committee of the Italian National Election Study (ITANES). His 2021 book, Leaders Without Partisans: dealignment, media change and the personalization of politics, examines the changing impact of party leader evaluations on voting behavior in parliamentary elections.  [diego.garzia@unil.ch]

Frederico Ferreira da Silva – University of Lausanne
Frederico Ferreira da Silva is a Senior SNSF Research at the University of Lausanne. He received a Ph.D. in Political and Social Sciences from the European University Institute. His research focuses on elections, public opinion and voting behavior. His 2021 book, Leaders Without Partisans: dealignment, media change and the personalization of politics, examines the changing impact of party leader evaluations on voting behavior in parliamentary elections. [frederico.silva@unil.ch]