As they compete with one another for new residents and tourists, how US cities and municipalities brand themselves has become more and more important. In 2019, the City of New York partnered with the Nike enabling the sportswear company to use the city’s departmental likenesses on their merchandise. M. Blair Thomas looks at how city managers are using such partnerships to create revenues and broader questions over branding, naming rights and the autonomy of public organizations.

Whether you consider yourself a flat-earther like current Brooklyn Nets basketball star Kyrie Irving once did or take a more traditionalist approach with a “rounder” point of view, Nike and the City of New York are hoping that Gotham is at the center of your fashionable universal view. In 2019, the city through its destination marketing organization NYC & Company (NYC & Co),entered into a two-year agreement with sportswear giant, Nike. It is considered by the Oregon-based company as the first partnership of its kind.

What makes the agreement different than its counterparts is that for the first time, the city’s contract grants a private organization access to utilize all 34 of their trademarked likenesses, including the Staten Island Ferry, New York Fire Department (NYFD), New York Police Department (NYPD) and New York City Department of Parks & Recreation (NYC Parks) among others with product release subject to prior approval. It was reported that NYC & Co. would receive five percent of Nike’s revenue on the branded merchandise with $20,000 minimum in guarantees. This relationship is the latest development in how a city can differentiate its brand through a private sector partnership.

The idea of municipalities trying to separate themselves from one another isn’t new. Public entities have long competed for residents, visitors, and tourists alike, all of which can contribute to an area’s tax base. Nearly 70 years ago, economist and geographer Charles Tiebout argued that cities compete with each other much like private companies do when citizens “exchange tax dollars or user fees with municipalities.” Competition occurs typically in a city-versus-city or state-versus-state context as each duke it out for potential revenue sources. For short-term ideas, consider that New York City Mayor Eric Adams had Florida in his city’s crosshairs over the state’s passage of its Parental Rights in Education bill (also called “Don’t Say Gay”)  by purchasing billboards in five Florida cities expressing that individuals live more freely in The Empire State.

As city managers continue to embrace the benefits of public marketing and branding outside of tourism, public administrators are now seeking ways to monetize it as well, which is where the Nike and New York City relationship comes into play. Although government licensing generally is thought of in terms of user fees and professional admission (such as nursing or teaching), engaging in licensing deals for apparel allows for municipalities to tap into a unique revenue stream without needing to invest in capital to do so. Separately, the NYPD netted $475,000 from licensing agreements in 2019 for the usage of their trademarks alone. To achieve this however in a partnership, an established cultural relationship with the private organization likely needs to exist.

Nike’s ties with the city are unique given its historical and cultural roots all five boroughs. Their efforts (along with Adidas) to endear itself to “Black basketball and hip-hop communities of urban New York” in the 1970s and 1980s created a following among city’s playground basketball legends. During that era, Nike also made in-roads with Queens-based St. John’s University, by signing its legendary men’s basketball coach Lou Carnesecca to a sneaker endorsement at the time of the Red Storm’s collegiate roundball renaissance. The city and Nike also linked up together on the silver screen.

Before Academy Award-winning film director and producer Spike Lee became known as courtside fixture in Madison Square Garden, the New York Knicks superfan was affectionately known by some for a name out of this world. In the 1986 flick “She’s Gotta Have it” Lee’s portrayal of Mars Blackmon, who sported Air Jordans and his now-famous Brooklyn cycling cap spawned a series of commercials near the end of the decade and into the early 1990s where the Brooklynite asked Michael Jordan whether his basketball exploits “Gotta be the shoes!” fueling the popularity of Jordan, Lee and Air Jordans.

Former NYC Parks Commissioner Mitchell J. Silver highlighted how New Yorkers in all five boroughs have benefitted from Nike into the 21st century, citing contributions to the city’s fields and playgrounds and access to sport programs. Nike’s release of 12 products emblazed with the NYC Parks oak leaf is an appropriate marker of that relationship. Their investment in infrastructure is key, with the 2017 opening of a 147,000 square-foot headquarters in midtown Manhattan symbolic of Nike’s commitment to the city.

Questions and opportunities for brand partnerships

A wait-and-see approach is likely what companies and municipalities are taking when looking at the larger picture of the Nike agreement. For instance, what will Nike design, and which departmental brands will be represented? Will Nike focus on departments that induce active lifestyle thoughts such as NYC Parks, or will the iconic brand look to develop apparel for other organizations that appeal emotionally to consumers such as the NYPD and NYFD? To what extent will apparel serve as the focus as opposed to footwear? How much money is New York City making from the deal in the first two years after all the receipts are counted?

From a research perspective, there many questions abound. Will this idea spark other apparel giants such as Columbia Sportswear and Under Armour to enter into similar agreements with other major cities or in Portland, Oregon, and Baltimore where each company was founded? Would companies enter these relationships abroad? Given Adidas’ German roots, could an international flavor such as an Adidas- Berlin partnership develop? Could American college towns, where major academic universities have athletic licensing agreements such as Nike in Las Vegas (University of Nevada–Las Vegas) and Adidas in Seattle (University of Washington), attempt to ride the coattails of pre-existing relationships within their city limits?

Broader fundamental questions relating to place brands and naming rights are also worth debating. Should public organizations maintain the legitimacy to define who has access to the place brand (or to brand elements such as the name) or what practices are allowed to be executed, including licensing-related activities? Relatedly, who maintains control over licensing for a public organization (NYPD, for example) compared to public naming rights, such as a park (imagine selling naming rights to Central Park and having it renamed as Central Park at Jordan Brand Square, for instance)? Can one department act autonomously over its trademarks, or does it have to work within a broader municipal framework? All of these remain to be seen.

The agreement takes place during a global pandemic which has halted travel, and in an atmosphere in which supply chain issues are chronically affecting companies across the world and the persistent threat of United States recession is worrying private and public sectors alike. With municipal budgets negatively affected across the globe, city managers must consider alternative revenue streams. If a public entity can expand its brand’s footprint while simultaneously maintaining control of the final decision on its messaging, this is something worth exploring. Instead of wondering whether it’s “gotta be the shoes” public administrators might follow another Nike famous tagline when deciding whether to pursue a major licensing relationship: “just do it.”

M. Blair Thomas – University of Oregon
M. Blair Thomas, Ph.D., M.P.H., M.P.A., is a visiting professor at the School of Planning, Public Policy and Management at the University of Oregon. His research interests broadly focus on citizen engagement and how local governments engage in branding from a strategic management perspective. His latest work explores issues at the intersection of race, protest, sport and public administration and the impact that athlete engagement has on citizen participation. 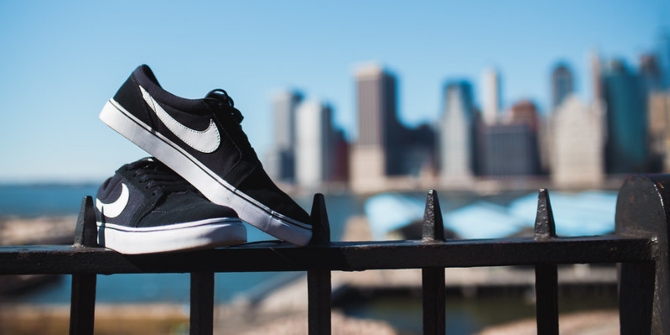