There is a growing body of research which links incidents of animal cruelty with other crimes, such as violence between people. In new research which takes advantage of data on over 8,700 animal cruelty offences from the FBI, Lynn Addington finds that two-thirds of animal cruelty crimes reported involved neglect cases and one-third intentional cruelty, and that virtually all neglect cases did not involve another crime. She writes that the pattern of intentional animal abuse which occur alongside violent crimes means that authorities should consider anti-violence prevention programs that also involve animals. The findings also suggest a need to develop separate interventions for cases of animal neglect compared to those involving intentional cruelty.

One in five intentional animal cruelty incidents involve another crime, and almost 40 percent of these additional offenses are interpersonal violence, according to recently available police data. In contrast, only three percent of animal neglect cases involve another crime. In new research, Mary Lou Randour of the Animal Welfare Institute, and I compared intentional cruelty and neglect crimes reported to police in multiple jurisdictions across the United States. Gaining a better understanding of the distinct characteristics of these two forms of animal cruelty can guide prevention and intervention efforts tailored for each type of crime.

The past few decades have seen a growing interest in animal cruelty offenses. This trend is largely attributable to evolving research identifying the association between animal cruelty and violence against humans. In addition to scholarly interest, concern about animal cruelty resonates on a personal level as about two-thirds of US households have at least one companion animal.

Until recently, animal cruelty research has been hampered by the lack of national data on these crimes. To help address this situation, the FBI approved the addition of animal cruelty offenses to its collection of crimes reported to police in 2014. In 2016, the first states started contributing animal cruelty data to the National Incident-Based Reporting System (NIBRS) from their local and state police departments. While these data have yet to become nationally representative in scope, additional police departments and states contribute data each year.

One unique feature of the FBI animal cruelty data is the amount of information collected about crime incidents. These details include the type of cruelty and allow intentional abuse cases to be distinguished from ones involving neglect. Examples of other information gathered identify any additional crimes that occurred, offender characteristics, and arrest information. No other animal cruelty data capture these details. 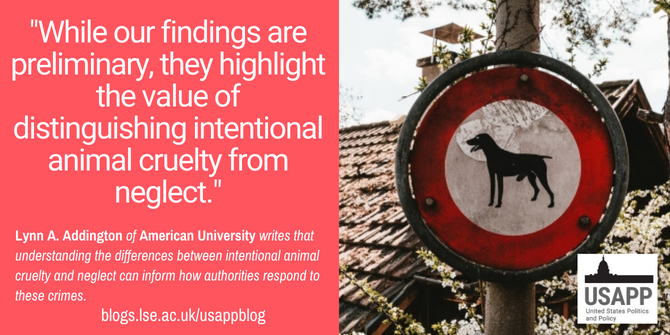 While we found both types of animal cruelty did share a few common characteristics including two-thirds of each occur in a home location, our study uncovered interesting differences in terms of those who commit animal cruelty, other crimes that occur, and arrest patterns. Regarding individuals who commit these crimes, we found over half (54 percent) of intentional cruelty incidents involve male offenders as compared to less than 40 percent of neglect cases. Our intentional cruelty finding is comparable to previous studies where men outnumbered women perpetrators. We also found intentional cruelty skew toward offenders of younger ages (29 and younger) and neglect toward older age groups (30 and older).

One of the key differences that we identified concerns whether other crimes occurred alongside the animal cruelty offense. Identifying these crimes is a unique feature of the FBI data collection and provides new insights on animal cruelty incidents. As noted above, one in five intentional cruelty incidents involve another crime. This pattern is in stark contrast to neglect incidents. Almost all (97 percent) neglect cases do not involve another crime. For intentional cruelty incidents, violent crimes are the most common co-occurring crimes (40 percent). Examples of these violent crimes are fatal and non-fatal assaults against people (rather than animals).

A second unique insight from our study is arrest patterns. The FBI animal cruelty data collection is unique in its collection of arrest data for these crimes. For either type of animal cruelty, the incidents are unlikely to end in an arrest. A slightly higher percentage of intentional cruelty cases involve an arrest, though, as over one-third end in arrest in contrast to about a quarter of neglect cases (35.3 percent vs. 25.9 percent).

Animal cruelty is distinct from neglect

While our findings are preliminary, they highlight the value of distinguishing intentional animal cruelty from neglect especially the potential to help tailor prevention and intervention programs for each type of animal cruelty. The patterns of intentional abuse involving younger men and co-occurring with violent crimes suggest the need to consider anti-violence prevention programs that involve animals and include addressing animal cruelty. One example is the Healing Species program where shelter dogs are used in school-based, anti-violence programs. Future work should identify other effective anti-cruelty programing and ways to promote their use in prevention efforts.

Our findings also suggest the need to investigate developing separate interventions for cases of neglect as compared to those involving intentional cruelty. Neglect cases are of particular interest as they account for two-thirds of the animal abuse incidents in our research, and they do not tend to occur with another crime. Animal welfare agencies recognize that many cases of animal neglect are due to insufficient resources available to the human companion of the animal. For publicly funded animal services or shelters, additional resources could help them provide resources to the community and combat neglect.

The differences between neglect and intentional abuse cases from our work also have potential implications for police departments. Police departments might consider ways to partner with officials from local animal services or shelters to help with interventions in cases of animal cruelty, especially situations that involve neglect. These partnerships also can improve the collection of animal cruelty data.

Policies responses can be tailored to each type of cruelty

Our findings suggest the need for continued work to understand the differences between neglect and intentional cruelty crimes. The new FBI animal cruelty data collection can support this research especially as more states and police departments contribute their animal cruelty data. This information also can provide additional insights to develop policies tailored to prevent each type of cruelty and intervene in cases reported to police.

Lynn A. Addington – American University
Lynn A. Addington is a Professor in the Department of Justice, Law & Criminology in the School of Public Affairs at American University. Her research focuses on fatal and non-fatal violent victimization, post-victimization responses, and ways to better connect research with policy and practice. In 2016, she received AU’s top award for faculty research.