Following the Supreme Court’s ruling which overturned Roe V. Wade, there has been fresh concern that subsequent cases may also overturn the right to same-sex relationships and marriage. In new research Jacob R. Neiheisel and Paul A. Djupe examine the link between changing attitudes towards gay rights and Americans’ declining religiosity. They find that increasing support for same-sex marriage over time is linked to falling attendance in houses of worship. Conflict within congregations which may increase following a new Supreme Court ruling, they argue, may cause more people to leave the organized religious services that they feel they no longer fit.

Justice Thomas’ concurrence in Dobbs—the decision which overturned Roe v. Wade—has sparked worries that other rights recognized by the Court might also soon be on the chopping block. Specifically, some have expressed concerns that same-sex relationships and same-sex marriage could potentially be in jeopardy given the legal rationale that the conservative majority laid out in Dobbs. Rolling back the clock to a pre-Lawrence and pre-Obergefell legal and political environment, however, might create conditions that further the nation’s ongoing shift away from organized religion and towards greater sorting along religious dimensions.

Since the early 1990s, increasing numbers of Americans have become religious “nones.” Recent polling has indicated that nearly a third are now willing to label themselves as “atheists, agnostics, or ‘nothing in particular’” when queried as to their religious identity. This figure is up considerably from the single-digit percentages of the US who responded similarly prior to the early 1990s—a time that witnessed a great deal of political activity on the part of the religious right. Indeed, there is evidence that political activity on the part of religious groups, coupled with policy changes that helped to make issues like same-sex marriage closer in the public’s consciousness (such as proposed bans on gay marriage), tracks with an increase in the number of religious “nones” at the state level. Indeed, there has long been speculation that gay rights is perhaps the issue driving shifts in religious behavior stemming from conflicts in the political realm, given the disproportionately large numbers of younger Americans who have turned their backs on organized religion in recent decades.

Investigating the link between changing attitudes and changing religious behavior

Our research shows that shifting attitudes towards same-sex marriage are associated with changes in attendance at worship services and even with leaving a particular house of worship altogether. Increases in support for same-sex marriage appear to have driven down respondents’ attendance at religious services between the two waves of the survey. But our research draws on the finding that there was an enormous amount of opinion change between 2006 and 2012 as Figure 1 shows. Nearly 40 percent of those strongly pro-same-sex marriage in 2006 changed to neutral or opposed; about 26 percent of those opposed in 2006 changed to neutral or in support of by 2012. 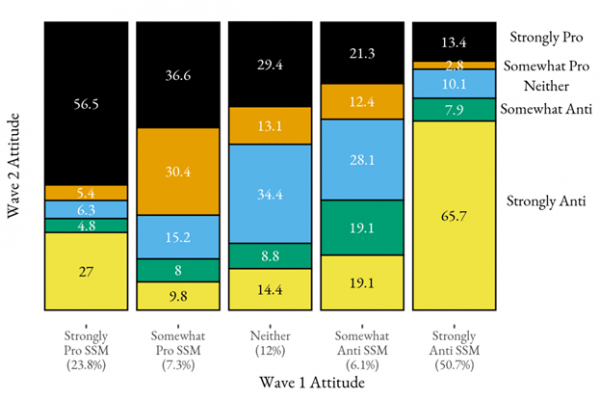 Crucially, the greatest changes in attendance were located among those most opposed to same-sex marriage in 2006 but had shifted to pro-gay marriage stances by 2012. To us, this suggests that the story that is typically told surrounding the rise of the “nones”—that the perceived marriage of faith and right-wing politics is driving those who identify as political liberals away from the church—is incomplete.

Further evidence that runs somewhat counter to simplistic versions of the rise of the religious nones comes from changes in worship attendance between 2006 and 2012. Such shifts in attendance that resulted from attitude change on same-sex marriage were most pronounced among those who attended church at the highest levels in 2006. This pattern suggests that exposure to disagreement on this issue encountered within congregations, which high attenders would be more likely to experience, is a powerful driver of change. 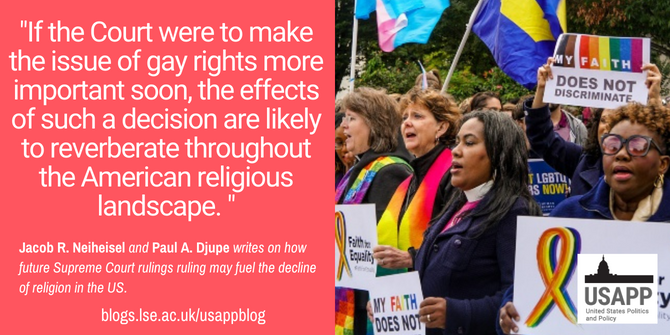 We find further evidence that is consistent with the idea that contentious culture wars issues, such as those related to gay rights, are associated with sorting across the political spectrum. That is, our analysis suggests that liberals and moderates who became less supportive of same-sex marriage between the two waves of the survey and conservatives who became more supportive of gay rights were both more likely to leave a house of worship. To us, this suggests that newly found conflict over the issue of same-sex marriage encountered within the local congregation was the driving force behind shifts in religious behavior among those on opposite sides of the political spectrum.

Based on this evidence, we argue that Justice Thomas’ reasoning in Dobbs, if applied by the Court’s majority to future cases surrounding protections for same-sex relations or gay marriage, might accelerate some of the trends that we have seen in the American religious landscape. Although much is made of liberals leaving organized religion over what they perceive as increasingly tight ties between religious groups and right-wing politics, our evidence suggests that the sorting that we have witnessed may have much more localized origins, rooted in the dynamics of houses of worship. These dynamics ensnare those on both the left and the right when believers change their positions on an issue like same-sex marriage which comes to the fore through outside events such as a Supreme Court decision, a denominational policy change, or a political campaign. The conflict brought about by encounters with different opinions may force a re-evaluation of one’s “fit” with a particular house of worship.

If the Court were to make the issue of gay rights more important soon, the effects of such a decision are likely to reverberate throughout the American religious landscape. As conflicts over gay rights open again in individual congregations, disagreements that had been ignored or downplayed post-Obergefell are likely to return. This increased importance may encourage persons of faith across the political spectrum to reconsider their relationship with organized religion. Some may initially draw down their attendance at religious services, while others may leave for a more hospitable environment or fall from the faith altogether. The functional result will be an increase in the number of nones and greater sorting along both religious and political lines.

Paul A. Djupe – Denison University
Paul A. Djupe directs the Data for Political Research program at Denison University, is an affiliated scholar with PRRI, the series editor of Religious Engagement in Democratic Politics (Temple), and co-creator of religioninpublic.blog. Further information about his work can be found at his website and on Twitter.