Local governments in the US often have the option to provide services in-house or to outsource these to other governments, private firms, or nonprofits. But what determines whether a municipality outsources it services? Wenchi Wei examines the importance of local political institutions in public service outsourcing, finding that the type of people in leadership positions in a municipality – “weak” mayors and, managers with professional backgrounds – as well as local electoral rules, can all influence the level of service outsourcing.

Public administration scholars and government policymakers have long focused on public service outsourcing, including its causes and consequences. Existing studies have mostly focused on the effects of fiscal stress, economic efficiency, political interests, and the ideological attitudes of officials and citizens on local outsourcing decisions. However, the importance of local political institutions remains underexplored. Elected politicians and appointed bureaucrats in different institutional contexts presumably have substantially distinct career paths and reward incentives. Moreover, local political institutions provide the basis on which public authority is allocated, local politics are organized, and public policies are enacted and implemented.

Our research looks at how institutional contexts matter for how US municipalities make their outsourcing decisions. To do this, we use data from the International City/County Management Association’s multiple rounds of surveys concerning local institutions and service delivery choices. Our work focuses on seven pivotal local institutions that address managerial professionalism, mayoral strength, and electoral rules. Moreover, based on the local institutions examined we were able to build a composite index which measures the general nature of the municipal structure on a political-administrative scale. Our estimations take advantage of initiatives and popular referendums which allows voters to change local statutes which then in turn influence local institutions.

We find that municipalities which have a council-manager, professional manager, a weak mayor, and nonpartisan and at-large elections of council members outsource less services. Professional managers can moderate the effects of the other factors which can affect a local government’s outsourcing decisions. Moreover, municipalities with a more political or a less administrative municipal structure outsource a larger portion of services. 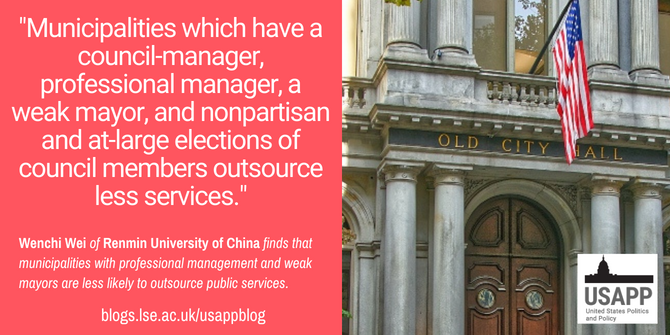 Photo by Pascal Bernardon on Unsplash

We used data on local government service outsourcing derived from the Alternative Service Delivery surveys conducted by the International City/County Management Association in 2002-2003, 2007, 2012, and 2017. The surveys were sent to all US municipalities with a population of over 10,000 and all counties with a population of over 25,000. The survey questionnaire asks questions about whether the specified core services are provided and, if so, how they are delivered, including those considered to be service outsourcing: contracting with other governments or authorities, private firms, and with nonprofit organizations.

Outsourcing in US municipalities 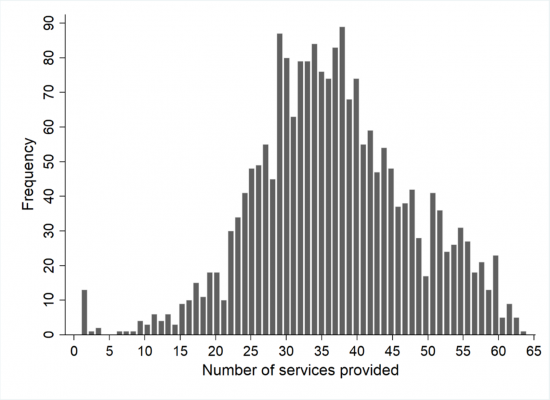 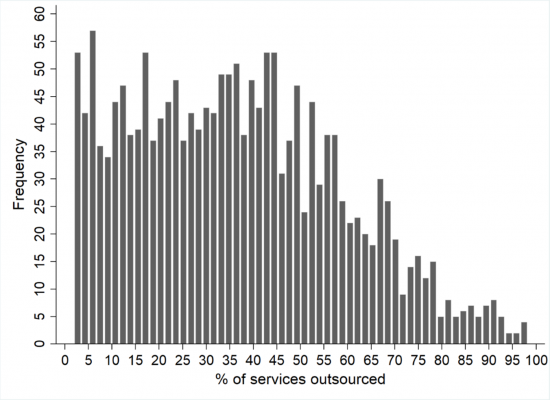 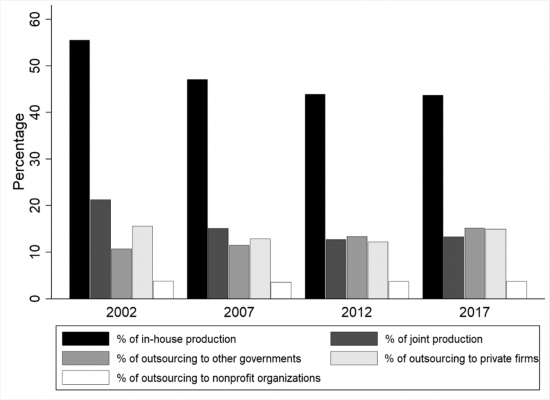 Why might professional managers be hindering public service outsourcing?

First, public choice scholars have long argued that bureaucrats seek to maximize control over governments’ budgetary resources and public service delivery for rent-seeking purposes. Service outsourcing may largely reduce managers’ direct control over or manipulation of the distribution of budgets, thus curtailing their opportunities to engage in rent-seeking. Consequently, city managers may oppose contracting out public services to external vendors.

Second, the existence of a professional manager within local governments may enhance the soundness of local fiscal conditions as professionally managed cities are more likely to solve fiscal difficulties such as high debt, budgetary deficits, short-term liquidity problems, and low credit ratings., which in turn makes service outsourcing less imperative.

A third explanation relates to city managers’ potential career motivations. City managers are presumably eager to advance their careers by enhancing managerial performance and demonstrating their managerial competence and reputation among peers in the profession. This motivation may encourage city managers to show that the in-house delivery of public services under their management can provide the same or higher quality of services in a more effective way than externally by market competitors, thus making service outsourcing unattractive.

We find that the statutory council-manager municipal form, the existence of a professional manager, a weak mayor, and nonpartisan and at-large elections of council members all mean that government service outsourcing is less likely. Second, professional managers within municipalities can moderate the influence of key contextual factors, such as population size and fiscal stress, on local outsourcing decisions. Third, a municipal structure that is more political or less administrative in nature positively affects government service outsourcing, especially outsourcing through interlocal cooperation. Fourth, the driving factors are distinct across different forms of public service outsourcing, including outsourcing to private firms, nonprofit organizations, and other governments.