The media reporting of the Ethiopian Famine in 1984-5 was an iconic news event. It is widely believed to have had an unprecedented impact, challenging perceptions of Africa and mobilising public opinion and philanthropic action in a dramatic new way. The contemporary international configuration of aid, media pressure, and official policy is still directly affected and sometimes distorted by what was – as this narrative aims to show – also an inaccurate and misleading story. Fiona Chesterton finds Suzanne Franks’ work to be a rich and worthwhile read.

Dawn, and as the sun breaks through the piercing chill of night on the plain outside Korem, it lights up a biblical famine, now in the 20th century. This place, say workers here, is the closest thing to hell on Earth.’

So began a BBC television news report broadcast nearly 30 years ago, and which begat millions of pounds in donations, the era of celebrity-fronted campaigning, a transformational growth of aid organisations, and much else besides. But it did not change – or feed – the world or have the impact on policy-makers as appeared at the time. That is the thrust of Reporting Disasters, a hard-headed analysis of this famous report by Michael Buerk from Ethiopia, and its consequences. The author, Suzanne Franks, Professor of Journalism at City University, is a former BBC Current affairs Producer and has published widely on international news coverage.

The book is certainly timely – as Britain’s spending on international aid is again very much a live issue – and its analysis is rather more sophisticated than some current political discourse -who would have thought that anyone could talk about “Bongo Bongo Land” in the summer of 2013?

In some ways, Franks’ terrain is well-trodden as the extensive references and bibliography shows. However, new trawls of the BBC archives, interviews with key players and FOI requests, have yielded new insights.

1984 was the high water mark of traditional television news broadcasting. The bulletins regularly attracted audiences of 8 million plus, and before the days of 24 hour news, correspondents actually had time to hone their words. Even without the extraordinary pictures shot by his cameraman, Mohammed Amin, Michael Buerk’s words retain their power and resonance.

Franks is able to explain why this well-crafted report made such waves, when previous TV documentary and radio reports on famine in Ethiopia broadcast as much as a year earlier did not: it came down to timing. According to Franks, the serendipity of an ITV strike leaving the field clear for the BBC (remember this was a pre-Sky era) and a recently revamped BBC Six O Clock News keen to show its mettle led to Buerk’s report being run at unusual length and as an exclusive. As a result, almost a third of the adult population of the UK watched in a two-day period. Its re-broadcast on the American Network NBC turned it into a global story. And of course, as Franks observes even rock stars, including a Boomtown Rat, watched teatime TV News then.

Franks shows how the Government and aid agencies had to respond to the public demand for action. Within Whitehall it was not news that there was an Ethiopian disaster shaping up, but Prime Minister Margaret Thatcher, even though hostile to the Communist regime in Ethiopia, knew that something had to be done – or at least be seen to be done. Hence her preference for RAF Hercules airlifts despite her advisers’ caution that this was not the most effective way to provide relief.

Reporting Disasters describes the media bandwagon that followed depoliticising the story as it rolled. While the tabloid column inches multiplied (a good graph illustrates just how much) it would seem that the story could only be digested as a simple humanitarian one (although Franks does not appear to have interviewed any newspaper journalist of the time to prove the point) For this ‘natural disaster’ was nothing of the kind – it was the result of civil war caused and even engineered by Colonel Mengistu’s regime. Franks draws in evidence the work of Amartya Sen which showed how famines are not ‘acts of God’ but a product of the political context where they occur.

In succeeding chapters, the author re-tells the story of how much harder it was in reality to feed the starving children and the generations of them that followed. So while giving a huge funding boost to established aid charities and new ones, notably Band Aid, the people who gave their pounds and pennies had expectations that could not be met by aid alone, but rather by more complex political and economic change within African countries themselves.

The book also explores what Clare Short, a former International Development Minister described as ‘the mutual parasitism of the media and the fundraiser’: how news organisations, with strapped budgets, relied on ‘freebie’ facility trips, and failed to make aid organisations the subject of as rigorous scrutiny as their size and use of public money might have demanded. The fundraiser meanwhile craved media publicity to keep the money rolling in and tolerated media’s tendency to simplify and distort the story.

In concentrating so much on what is now a historic broadcast context, Franks does not have time to explore the more contemporary questions of how a 24 hours news culture and social media may have changed the reporting of natural disasters for better or worse. Franks hints that she thinks the latter in quoting David Styan who judges current news values as an “emphasis on expertise and house style above local knowledge and … technical competence and speed over accuracy and content”. Something worth further analysis another day, perhaps.

For readers outside the UK, Franks’ concentration on the British media may also be frustrating. But for students of journalism and for all those who want to understand how Africa has struggled for years to be reported properly and with the subtlety and depth we expect of Western culture, Reporting Disasters will be a worthwhile read.

Fiona Chesterton worked as a Producer, Editor, and Commissioning Editor at the BBC and at Channel 4, primarily in News and Current Affairs. She was made a Fellow of the Royal Television Society in 2008. 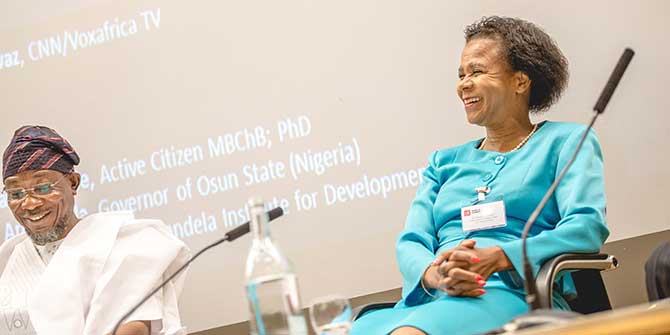 Bad Behavior has blocked 2341 access attempts in the last 7 days.