Aaron Pangburn visits Gbadolite, the ancestral home of Mobutu Sese Seko and finds a marginalised community struggling with increased pressures as a result of the crisis in neighbouring Central Africa Republic.

As we approach the 50th anniversary of President Mobutu Sese Seko’s rise to power, and the debates over the “next Congolese President” in 2016 intensify, it is a unique moment to reflect on his legacy and his lingering impact on the locality he once called home. The story of Gbadolite (in the territory of Nord-Ubangi and the province of Equateur) is often romanticised, as the small village in the middle of the jungle that was once transformed into a “city of privilege,” complete with a 5-star hotel, Coca-Cola factory and an international airport modeled after its counterpart in Nice, France.[1] Mobutu’s three immense palaces sat on the hills of neighbouring Kawele, and VIP guests such as the Pope, the UN Secretary-General, the King of Belgium, Director of the CIA and President of France were his reported guests. As Albert Moleka, a frequent attendee of these lavish gatherings and now former senior member of the opposition party, the UDPS, put it in a recent Guardian article, “it was like an African Versailles.”[2]

Yet while this vision is still being described in international newspapers as the prime example of Mobutu’s kleptocracy,[3] there is a need to disassociate the privilege the president bestowed on his guests to the palace and the city that remains in the valley below. During a recent field visit in February 2015 to Gbadolite and its surrounding environments, JSRP Research Director at the SSRC Tatiana Carayannis, Program Coordinator Aaron Pangburn, and Program Associate Mignonne Fowlis encountered a marginalised community desperate to shed the image of its former president. This is not because there are not fond memories of the past and of the support Maréchal Mobutu provided to the community, but rather that this notion of privilege was vastly overstated, then and now. For the past eighteen years the community has felt punished by provincial and state leadership, and overlooked by the international community.

In 2015, visiting Gbadolite is a surreal experience. The airport’s windows are shattered and its walls, once covered by the murals of Africa’s great artists, are now obscured by the charcoal graffiti of soldiers and rebel armies commanded to defend it in wars past. Its Concorde jet-sized runway is overrun by tall grass and only receives an occasional UN or humanitarian flight, or a domestic carrier a few times a month. The Coca-Cola factory has long been closed and looted, and the only functioning hotel is the former office of the National Institute of Social Security. Even state judges feel the brunt of marginalisation, as without a bank in the city, they must wait for agents in another territory to deliver their salaries,  often months late. It is a strange city frozen in time, with cranes and construction sites in the same positions they were in the late 1990s. But instead of a new water ministry, students have re-appropriated one of the unfinished buildings and take their classes within its concrete frame.

Gbadolite is still able to rely on the hydro-electric dam Mobutu build in nearby Mobayi in 1989 for a few hours of electricity on most days, and the city of around 160,000 survives on its local market and the determination of its people. Yet in recent months, it has endured increased pressures due to the crisis across its northern border in the Central African Republic (CAR). After the real estate, agricultural processing, and timber industries collapsed after Mobutu’s departure, Gbadolite now imports nearly all of its commercial goods from nearby CAR. But with the rise of violence, trade networks across the Ubangi River have been completely disrupted, increasing prices in the markets, and forcing the community to rely on the poor infrastructure in the interior of the province and wait for goods to arrive on unstable lorries. The nation’s military, the FARDC, has also been deployed to “secure the border,” and thousands of refugees have fled into the community. While the army’s presence has increased harassment and the number of arbitrary arrests, certain soldiers were also embroiled in a trafficking of arms-for-cattle scandal with Seleka militants, where the going rate was one AK-47 for an entire cow. The sudden presence of affordable beef in the markets was a welcome benefit, until the illegal trade was discovered and perpetrators arrested.[4]

The flow of refugees continues to grow, as nearly 13,000 Central Africans have been registered and transported to the Inke camp settlement, 40 km outside town, and an additional 11,000 have been accepted by local communities and villages.[5] Responsible for administering the camp and registering the new arrivals is the national refugee commission (CNR), with an office in Gbadolite and its few supervisors shuttling back and forth between their office in the city and the endless field of white tents in Inke. Limited by the absence of state resources and the remoteness of the camp, the commission has only 37 police officers at its disposal to protect the visiting Central African population. International assistance is also sparse, with the World Food Programme (WFP), Food and Agriculture Organisation (FAO), United Nations High Commissioner for Refugees (UNHCR), and the African Initiatives for Relief & Development (AIRD) as the primary providers.[6] Interviewees noted that aid deliveries are regularly delayed, due to “logistical issues” and the poor quality of the roads in Nord-Ubangi.[7]

While these additional pressures and concerns over protection have provoked fears that the violence in CAR will spillover into Equateur, Mobutu’s legacy is having a more direct impact on the community’s access to justice and security, due to an on-going customary conflict that was fomented by his enemies after he fled the country for Morocco in 1997. When Laurent Kabila’s ADFL took Kinshasa, he arrested Maman Gengba Wawi Leonie, who was the Chief of the Lite community (groupement) for the previous seventeen years. Her replacements divided the family into two camps and when she was released in 2006, Mr Lite Yangba Fulgence, her younger brother (and namesake of their father), refused to cede authority due to claims of male privilege. For the next six years they challenged one another and simultaneously claimed to represent the people of Gbadolite at various Minister of Interior events. Ultimately the governor intervened in 2012, and a popular consultation decided to restore the powers of the chief to La Maman. Yet with her untimely death in late 2014, succession remains a divisive issue and has further weakened the legitimacy of a customary institution that is responsible for ensuring the well-being of its community.

These enduring side effects of the Mobutu era, and the stigma that they have inherited is a strong source of frustration for the people of Gbadolite. It may have also resulted in the absence of international NGOs (World Vision appeared to have the only office in the city), striking given the regions’ poverty numbers.[8] But rarely is the blame for the many issues confronting the community directed towards the former president, except for an occasional shot at his descendants “who spend more time vacationing in Europe than with us.”[9] Instead the target is Kinshasa, or the provincial capital in Mbandaka and the elected representatives they rarely see, and therefore are incapable of understanding their problems and fighting on their behalf. In this light, the process of découpage, of splitting Equateur into five new provinces,[10] is generally welcome, as the chance to more locally govern Nord-Ubangi, as its most likely capital, could slowly begin to reverse the tide of urban decay, and restart the project of developing this promising city that was halted in 1997. During one of the interviews with the JSRP research team, a Yakoma notable stated in frustration, “we are so much more than Mobutu…that history is long behind us.”[11] Here is to hoping the community of Gbadolite will soon be given the opportunity to prove it.

[3] This is a simplistic characterization that many Congolese scholars refute and instead highlight his many nation-building achievements, see Mvemba Phezo Dizolele’s 2014 Foreign Policy piece for one example.

[7] Interview with the Committee of Refugees, 7 February 2015 (Inke, Democratic Republic of Congo). We were not able to verify this information with representatives from the agencies during our visit.

[10] The 2006 constitution states that the current eleven provinces should be converted into the capital of Kinshasa and 25 provinces with Equateur splitting into five new provincial units (Equateur, Mongala, Nord-Ubangi, Sud Ubangi and Tshuapa). This process was intended to be implemented within 36 months of the constitution’s promulgation, but in 2015 there does seem to be some momentum, as the Minister of Interior and interim governor have begun to remove certain territorial position in the provincial government, in order to implement broader changes. See this article from Radio Okapi (23 February 2014) for additional detail. 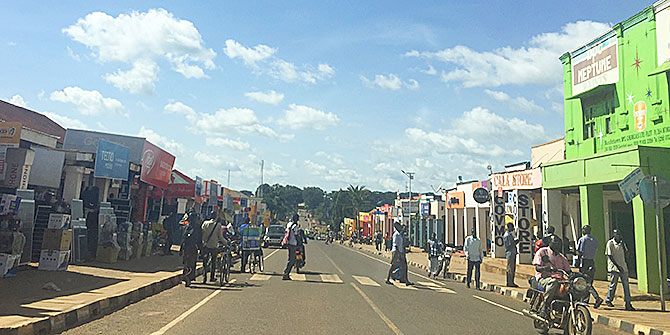 Bad Behavior has blocked 3259 access attempts in the last 7 days.