Stacey Hynd says that Alicia Decker gives a unique insight into the lives of ordinary women who lived under the turbulent rule of Idi Amin in the book, In Idi Amin’s Shadow: Women Gender and Militarism in Uganda.

From HIV/Aids to bush wives, ‘mini-skirt bans’ to development policy, women’s rights and gender equality have been, and remain, contentious issues in Uganda’s recent history. In Idi Amin’s Shadow is the first book to extensively explore women’s lives in the ‘shadows’ of military rule in 1970s Uganda. Decker’s book presents an engaging, accessible and welcome examination of women’s “complex and sometimes paradoxical relationship to Amin’s military state” [2], showing how the state’s use of violence offered opportunities as well as threats for women. In addition to exploring women’s experiences of Amin’s regime it also shows how gender informed (and was informed by) the ideology and practice of militarism in Uganda at this time. The book combines oral history and archival research, drawing on over one hundred interviews from a cross-section of Ugandan society which are supplemented by documents drawn mainly from state agency archives in Kampala.

In Idi Amin’s Shadow explores the different versions of femininity which emerged in Uganda under his regime: the ‘respectable’, the ‘disreputable’ and the ‘masculinised’. Amin’s attempts to mobilise and control particular forms of femininity ranged from positioning his wives as “mothers of the nation” to help build socio-cultural legitimacy for the military regime, to his espousal of women’s rights during the International Year in 1975, leveraging “women’s issues to consolidate political hegemony and maintain a certain performance of power” [100]. Decker highlights the ambivalent relationship that many women had with Amin: while they may have supported his policies, they also came to fear the violence of his militarism. Many women found new autonomy within the household after their husbands and male relatives fled into exile following Amin’s ascent to power, while the 1972 Asian expulsions offered women space for limited economic empowerment, with new forms of business respectability emerging that allowed urban women to earn an income working outside of the home: as one woman noted, “Amin taught us how to work” [87]. Operating alongside these newer forms of ‘respectable’ waged employment were older forms of gendered labour, namely the tactics of ‘Nubianisation’, in which women leveraged their intimate relationships with Nubian men close to regime to access resources.

Some women traversed multiple spaces and personas of ‘dis/respectability’ during this time. The book recounts the fascinating life of Elizabeth Bagaya, the eldest daughter of the King of Toro, a model and actress who became the first female barrister in East Africa and whose glamorous femininity and international prestige led to her becoming Amin’s roving ambassador and Minister of Foreign Affairs, before her reported refusal to marry Amin resulted in public shaming and exile. In a parallel to recent attempts to regulate morality and femininity in Uganda, Decker investigates the mini-skirt ban enacted under Amin, showing how young women were cast as the primary culprits of immorality, and publicly shamed or assaulted for their ‘indecent’ dress.

As in many other states, as internal legitimacy weakened, the policing of women’s bodies and gendered performances of power intensified. Beyond highlighting women’s tactical agency in socially navigating the spaces of terror and opportunity that emerged under Amin, the book also explores the militarised hegemonic masculinity which shaped the Ugandan state more broadly. Decker convincingly outlines the modalities of violence under Amin, stressing how his, and the state’s, use of violence was logical and strategic, with seemingly irrational force in fact deliberately deployed as a performative tactic. A key argument of the book is that violence under Amin was highly gendered, and based upon patterns of hypermasculinity which had been shaped by historical patterns of militarised masculinity in West Nile and (post-)colonial military cultures. These gendered performances formed a “crucial mode of governmentality, allowing those in power to disguise the fragility of the military state” [42]. Different spaces of power became variously gendered, as when the state became increasingly militarised and the civilian police found themselves “feminised” [46] in comparison.

Decker shows how as the regime collapsed, and in aftermath of the 1976 Entebbe hijacking which humiliated the army, soldiers lashed out in displays of this ‘hypermasculinity’, increasingly targeting women for beatings, rape and disappearance. The book goes on to explore the roles which women learned to play within the ‘theatres of terror’ staged through state violence, investigating in particular the ‘disappearances’ which ravaged Uganda under Amin, when women were both the lost and those who lost: victims, witnesses, and searchers who activated and built social networks to facilitate their survival and to locate the ‘disappeared’, deploying what Decker terms a “politics of invisibility” [114]. In women’s eyes, Amin’s spiralling violence ‒ and the killing and the raping perpetrated by his soldiers ‒ turned him from the ‘father of the nation’ to the kijambiya, the machete [147]. The book also examines gender-based violence in the liberation war, with the last chapter on ‘militant motherhood’ being focused more on woman’s survival strategies during the war rather than engaging with wider debates on ‘militant’ women in African conflict.

In Idi Amin’s Shadow constructs an interesting, original and engaging empirical analysis of women’s lives under Amin from the patchy archival record, drawing on a wealth of oral history to bring a unique and moving insight into ordinary women’s lives in this turbulent period. Decker’s focus is very strongly on women’s relationships with the Ugandan state, which means that concurrent histories of domestic or familial violence are largely absent, somewhat restricting the analysis of the relationship between political and structural gender violence. The book could also delve more deeply into the category of ‘Ugandan’ womanhood, exploring generational, regional or ethnic differences, an analysis which might have emerged had there been more utilisation of district archives, particularly in the North. In Idi Amin’s Shadow will be of particular interest to scholars and students of Uganda, and African social and gender histories. Overall, Decker makes a compelling and significant contribution to the histories of gender and violence in Africa, raising important questions regarding the legacies of Amin’s violence and militarism for Uganda’s ongoing struggle with structural violence and gender inequality.

Dr Stacey Hynd is a senior lecturer at the University of Exeter.

Book review: Women and the Informal Economy in Urban Africa – From the Margins to the Centre by Mary Njeri Kinyanyjui 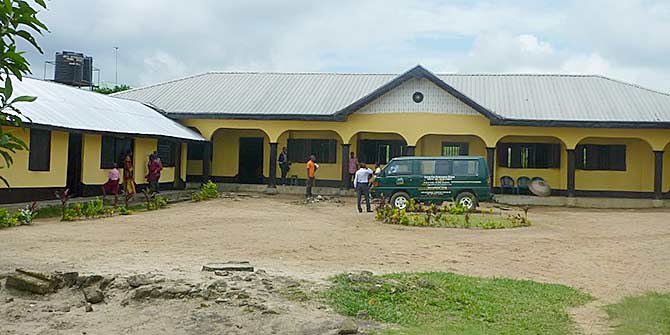 Football in Ghana can be an avenue for LGBTQI+ activism