On 1 June, Vote Leave issued a statement outlining its plans for a post-Brexit immigration policy. Among other matters, the statement sought to give reassurance on two status issues that would arise in the event of withdrawal: the position of resident EU citizens, and the future rights of Irish citizens. According to Bernard Ryan, their position on migrants’ rights after a Brexit raises more questions than it answers.

In relation to the first, Vote Leave’s position is that “there will be no change for EU citizens already lawfully resident in the UK. These EU citizens will automatically be granted indefinite leave to remain in the UK and will be treated no less favourably than they are at present.”

In relation to the second, its position is that “there will be no change for Irish citizens. The right of Irish citizens to enter, reside and work in the UK is already enshrined in our law. This will be entirely unaffected by a vote to leave on 23 June.”

On both points, however, the Vote Leave statement lacks crucial detail. A number of questions are proposed here that ought to be addressed ahead of the referendum on 23 June, if voters are to have a clear picture of the implications of Brexit decision in this area.

On its face, the Vote Leave statement provides that all EU citizens who are lawfully resident would acquire indefinite leave to remain. This commitment is potentially so broad that it requires further clarification, in order to be credible.

Under the Citizens Directive, as implemented in the United Kingdom, rights of residence generally arise in three main stages. First, after entry to another member state’s territory, EU citizens and their qualifying family members acquire an initial right of residence for three months.

Secondly, a migrant EU citizen has an extended right of residence if they are in any of these categories:

Thirdly, after five years’ qualifying residence, a migrant EU citizen acquires a right of permanent residence. At that point, their right to stay no longer depends on falling within the categories listed.

As the right of permanent residence broadly corresponds to indefinite leave within the UK system of immigration control, it is reasonable to ask whether the intention is to protect that right alone.

If the answer to that question is ‘yes’, then the intended status of those with initial and extended rights of residence requires to be explained.

Alternatively, if the answer is ‘no’, then it appears necessary to explain whether there would be any other pre-conditions to the acquisition of indefinite leave by EU residents. Would  there be a qualifying period of less than five years? Would initial rights of residence count? Would all rights of extended residence count equally?

A further issue is the future status of EU citizens who live in the United Kingdom – sometimes for lengthy periods – without having an extended right of residence.

In practice, the United Kingdom authorities generally accept the presence of these EU citizens, so long as they do not claim benefits, are not homeless, and do not commit criminal offences. Even if their presence comes to the attention of the authorities, under the Citizens Directive, they ought not to be removed from the territory if that would be disproportionate, having regard to their personal circumstances.

A particular difficulty in this context is that, under the Citizens Directive, comprehensive sickness insurance is required for an extended right of residence under each of the study and ‘sufficient resources’ categories. In practice, EU citizens in these categories are able to register with the national health service, as they are considered to be “ordinarily resident” in the United Kingdom. Despite that, the Home Office takes the view that private health insurance is necessary for them to be lawfully resident. The correctness of that interpretation is open to doubt, and has been contested by the European Commission. As things stand, however, there is a danger that many resident EU citizens who are students or de facto self-sufficient are not considered lawfully resident in the United Kingdom.

Would EU citizens who did not meet the requirements for lawful residence be excluded from Vote Leave’s  proposed entitlement to indefinite leave to remain? If so, would any other provision by made for them?

The Vote Leave statement only mentions EU citizens, and does not refer to their qualifying non-EU family members – children, partners, dependent parents, et cetera – who are resident in the United Kingdom. Yet those family members also have rights of residence protected by EU law. In the first five years of stay, these rights are generally linked to qualifying residence by an EU citizen. After five years, family members obtain an autonomous right of permanent residence.

Does Vote Leave intend that the rights of non-EU family members, who are resident on the cut-off date, should be protected? The statement’s silence on this point suggests a reluctance to commit to such a general proposition. The result is a lack of clarity both for non-EU family members, and for EU citizens in their families, as to their security of residence in the event of a vote to withdraw from the EU. 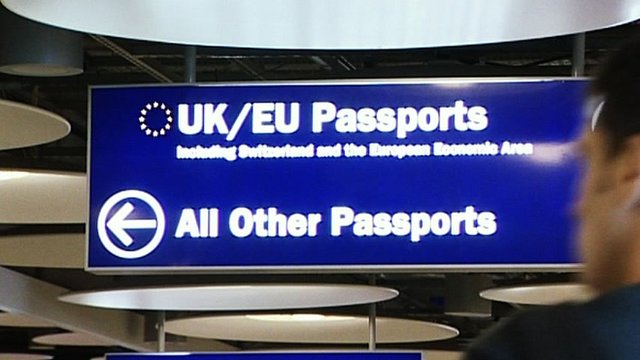 The Vote Leave statement refers to ‘EU citizens’ as the intended beneficiaries of protected residence rights. This phrase covers the nationals of the other 27 EU member states. Because of international agreements at the EU level, most EU free movement rights also apply to nationals of three European Economic Area states (Iceland, Liechtenstein and Norway) and to Switzerland. In the United Kingdom, the legislation implementing the 2004 Citizens Directive and other EU free movement rights applies fully to the nationals of those four states.

While the reference to ‘EU citizens’ may be a shorthand, it leaves open the possibility of separate treatment of the nationals of these four non-EU states. Whether they are to benefit from the promise made by Vote Leave is a further point on which clarification ought to be provided.

At present, there are two key practical advantages to a person’s being covered by EU free movement law, relative to general immigration law. One is that rights of residence arise automatically. Residence documentation may be obtained as evidence of a right of residence, but is not a pre-condition to such a right.

The other is that EU residence documents are comparatively inexpensive. The Citizens Directive provides that such residence documents should either be issued free of charge, or should be subject to a charge not exceeding that for similar documents issued to nationals of the state in question. On that basis, in the case of United Kingdom, the fee for these documents is currently £65 per person.

In contrast, under the general immigration system, leave to enter or remain is normally conditional upon the issuing of immigration documentation. Moreover, the fees are relatively high. For example, the basic fee for a Tier 2 work visa application is currently £564, while that for a family settlement visa is £956. Similarly, the basic fee for a limited leave to remain application is £649, while that for indefinite leave to remain is £1500.

In the event of withdrawal from the EU, would those who currently reside under EU law remain at liberty to reside without documents, and to pay relatively low fees if they chose to obtain them? The phrasing in the Vote Leave statement that indefinite leave would arise “automatically”, and that existing residents “will be treated no less favorably than they are at present”, suggests that they would. However, the very fact that a status within general immigration law would be acquired leaves open the possibility that documents would be necessary, and that an application would attract high fees. Here too, clarification of Vote Leave’s proposals appears desirable.

Deportation is another area where it is unknown whether the benefit of EU rules would be retained by resident EU citizens. According to the Vote Leave statement:

“we will rapidly amend the European Communities Act 1972 to take back the power to remove criminals and other persons whose presence in the UK is not conducive to the public good. There are dangerous people living in the UK who we cannot currently remove because of EU law.”

There is a tension between this statement and the general principle, quoted above, that resident EU citizens “will be treated no less favourably than they are at present”. Under the Citizens Directive, EU residents are entitled to a series of guarantees against expulsion. In particular:

The EU law framework is significantly more protective as regards expulsion than general immigration law. For those not protected by EU law, the UK Borders Act 2007 provides for the ‘automatic’ deportation of foreign nationals sentenced to a period of imprisonment of one year or more, and deems the deportation of such persons to be conducive to the public good.

It may be that Vote Leave’s intention is that ‘automatic’ deportation would apply only to those who took up residence after withdrawal from the European Union. Without a commitment to that position, however, it is not certain that it would be politically sustainable after a decision to withdraw from the EU.

The claim in the Vote Leave statement that the entry, residence and work rights of Irish citizens are “enshrined” in law is incorrect as a description of the current legal situation. While Irish citizens are not considered to be “foreign” under the Ireland Act 1949, that does not affect their immigration status. Irish citizens have in fact been subject to United Kingdom immigration control since the Commonwealth Immigrants Act 1962, and in principle they remain subject to control under the current Immigration Act 1971.

While there is no reason to doubt the genuineness of Vote Leave’s intention to recognise a special position for Irish citizens, it remains unclear how this would be done, or what the content of that privileged status would be.

This post represents the views of the author and not those of the BrexitVote blog, nor the LSE. Image: Creative Commons Licence.

Bernard Ryan is Professor of Migration Law at the University of Leicester.