Prime Minster Theresa May gave a speech on 17 January in which she provided further information on the arrangements for Brexit. After Brexit, the UK will no longer be in the jurisdiction of the European Court of Justice (ECJ). The UK will, once again, take full control of its own laws and the Single Market altogether. The UK will also leave the Customs Union in order to be free to negotiate its own free trade deals. In light of the above, Ruth Lea argues that trade can thrive under WTO rules.

The Government has lost its legal battle to start the Brexit process without first going through Parliament. Specifically, the Supreme Court ruled that the Government cannot trigger Article 50 of the Lisbon Treaty, which the PM has said she will invoke by end-March, without first obtaining Parliament’s approval.

At this stage of the debate it is widely assumed that Parliament, both the Commons and the Lords, will give approval for triggering Article 50. After all, the Commons recently (7 December) passed a Government amendment which stated that its timetable for triggering Article 50 should be respected by Parliament. MPs backed this amendment by 461 votes to 89, a huge margin of 372. Though the vote is non-binding, MPs would need to find fresh objections to the Government’s handling of Brexit if they were to oppose Article 50 enabling legislation with any degree of credibility. And it is almost certain that the Lords will not block the Government’s plans.

This coincides with another important Brexit development, which was the release of the first report of the Commons Exiting the European Union Committee, entitled “The process for exiting the European Union and the Government’s negotiating objectives”.  The report called on the Government to publish its Brexit negotiation plan as a White Paper by the middle of February, including clarity about membership of the Single Market and/or Customs Union. The report also called for an outline framework of the UK’s future trading relationship with the EU and transitional arrangements if it is not possible to reach a final agreement by the time the UK leaves the EU. The Committee also wanted the Government to commit to Parliament having a vote on the final agreement. The Government may or may not heed its requests.

More specifically, the Committee suggested that, by the time that the UK exits the EU, it is essential that clarity has been provided for the following, as a bare minimum:

Suffice to say, the debate on options for Britain’s post-Brexit relationship with the EU continues to exercise policy-makers. As I have written before, there is much to recommend a bespoke trade deal in order to minimise trade disruption for both UK exports to the EU and EU exports to the UK on Brexit. Specifically, this would, I suggest, prioritise:

It is in both the UK’s and the EU27’s economic interests to agree such a deal. Concerning goods, it is arguably more in the EU27’s interests that tariff-free trade continues than in the UK’s as it runs such an enormous visible trade surplus with the UK. According to the latest figures the UK’s visible trade deficit with the EU was £89.0bn in 2015. The deficit with Germany alone was £31.1bn. Deficits were also sizeable with the Netherlands (£14.8bn), Belgium-Luxembourg (£9.5bn), Italy (£7.5bn), France (6.4bn), and Spain (£5.1bn).

The EU wants easy access to the City after Brexit

When it comes to the financial services sector the situation is somewhat different as the UK runs a surplus with the EU. But, as the Governor of the Bank of England said recently to the Treasury Select Committee (11 January), failure to secure a deal with Brussels on the City would arguably pose a bigger financial risk to the EU than to the UK on Brexit. He told the MPs “there are greater financial stability risks on the continent in the short term, for the transition, than there are for the UK” if there was no Brexit deal. Incidentally, he also said that Brexit no longer posed the biggest risk to domestic financial stability, as concerns were rising about the growth of consumer credit.

And a recent Guardian report suggested that Michel Barnier, the EU’s chief negotiator for Brexit, has shown the first signs of backing away from his hard-line, no-compromise approach after admitting he wanted a deal with Britain that will guarantee the EU27 member states continued easy access to the City after Brexit. According to the report, Barnier, in some unpublished minutes that hinted at unease about the costs of Brexit on continental Europe, had expressed the wish for a “special” relationship with the City of London,. “Some very specific work has to be done in this area,” he said, according to the minutes (apparently). “There will be a special/specific relationship. There will need to be work outside of the negotiation box …in order to avoid financial instability.”

The prospects for a bespoke deal are, therefore, reasonably positive. But, if there is no bespoke agreement, then the default position would be that the UK, a member of the World Trade Organisation (WTO), would trade under WTO rules. The UK would, for example, face the EU Common External Tariff as EU exporters would face the tariffs adopted by the UK. There is, however, convincing evidence that trade can thrive under this regime, given favourable commercial circumstances. Preferential trade deals may oil the wheels of international commerce, but their importance should be kept in perspective. If the commercial circumstances are adverse, trade will not thrive, irrespective of special trade agreements.

Moreover, over the last decade not only has UK exports to the non-EU grown quicker than with the EU, but UK exports to non-EU countries that have no preferential trade deals with the EU has been buoyant. Chart 1 includes the growth rates in exports in goods and services for 2005-2015 (inclusive) for Britain’s key trading partners.  The main conclusions are: 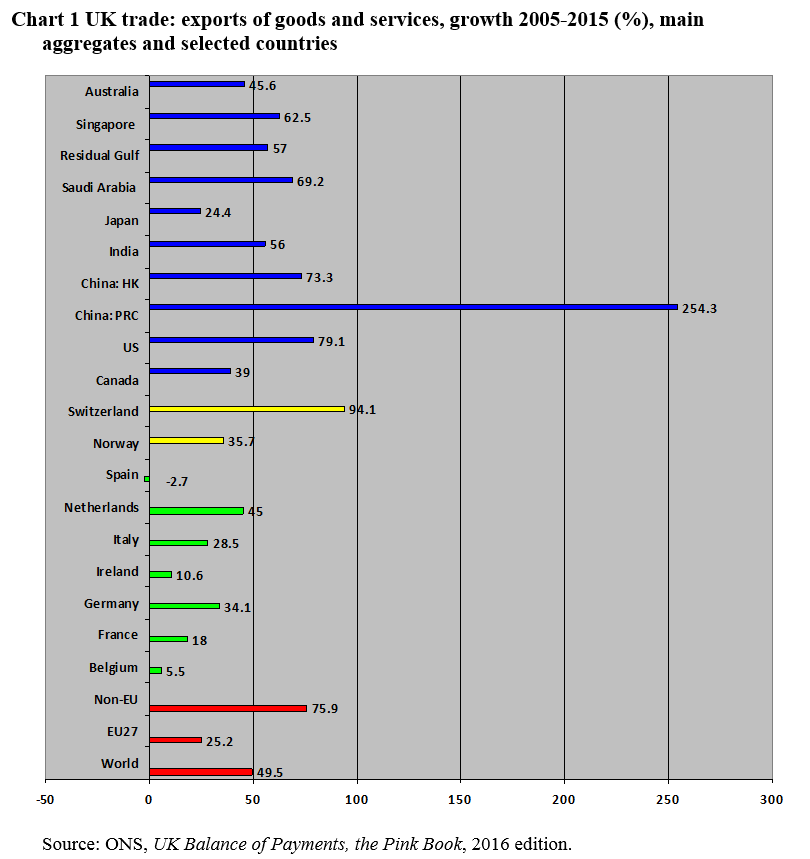 If the UK trades with the EU under WTO rules then UK exporters will, as noted already, face the EU’s Common External Tariff. But, as William Norton argues in a recent paper for Civitas, such costs should be quite manageable and could be mitigated. His basic conclusions were:

An earlier, extended and fully referenced, version of this post can be found here.

The article gives the views of the author, and not the position of LSE Brexit, nor of the London School of Economics. Image by World Trade Organization: Creative Commons Attribution-ShareAlike 2.0. 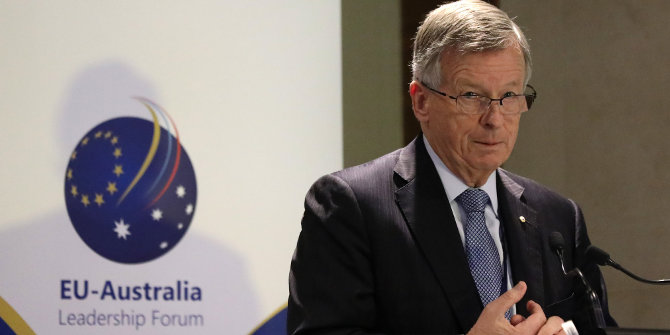