The EU policy process is often criticised for being distant from its citizens. Part of this criticism is rooted in a lack of media coverage of EU legislative decision-making, says Iskander De Bruycker. Drawing on a recent study, he illustrates that the extent to which politicians in Brussels address citizens’ interests in the media over a particular piece of legislation depends on how politicised that issue is. And while EU politicians are more likely to engage with the media on issues that have been politicised by civil society groups, they are less likely to do so over issues that business lobbyists have mobilised around.

To explain why political elites in Brussels address citizens’ interests in the news, I point to the politicised nature of EU policy processes. Politicisation involves conflict, public scrutiny and intense stakeholder mobilisation. Almost intuitively, we associate politicisation with more democratic quality and control. While indeed, politicisation makes policy processes more visible and citizens more vigilant, it does not always imply that public interests prevail. In many cases, politicisation is elicited by business lobbies and it can bring about policy deadlock. This may harm or delude the public interest. Think about the politicisation of the Financial Transaction Tax or the Eurobonds issue, which eventually led to a policy stalemate.

To study the media claims of EU political elites empirically, I conducted a large-scale content analysis of 2,164 media statements in six European media outlets on a sample of 125 legislative proposals (2008-2010). This data collection was part of the broader INTEREURO project. I found that in 14% of the cases, political elites referred to public interests when making claims about EU public policy, i.e. they addressed the interests of diffuse groups such as ‘taxpayers’, ‘consumers’, ‘patients’ or European citizens in general. For instance, on the legislative proposal regarding roaming on public mobile telephone networks [COM (2008) 580] MEP Viviane Reding said in European Voice:

“EU citizens should be free to text across borders without being ripped off… It is not a good sign for the competitiveness of Europe’s mobile industry that it still hasn’t got the message that credible price reductions are needed to avoid regulation.”

Figure1: Politicisation and public interest appeals in the news for each legislative proposal

The figure above illustrates the number of appeals to public interests in the news and the degree of politicisation per legislative proposal. Politicisation is measured based on an index gauging the number of stakeholders that mobilised, the degree of conflict and the public salience of the issue. Clearly, on some policy proposals appeals to public interests in the news ‘peaked’. For instance, the 2008 regulation proposal regarding roaming on public mobile telephone networks [COM (2008) 580] attracted more than 20 claims addressing citizens’ interests.

Figure 2: The effect of civil society mobilisation on EU political elites’ tendencies to address public interests in the news 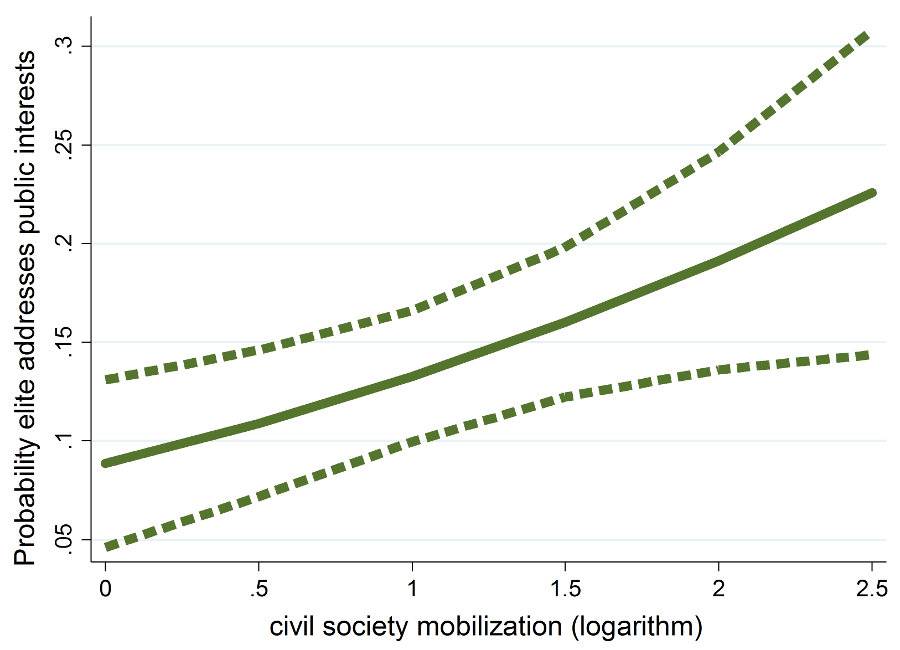 Figure 3: The effect of business mobilisation on EU political elites’ tendencies to address public interests in the news 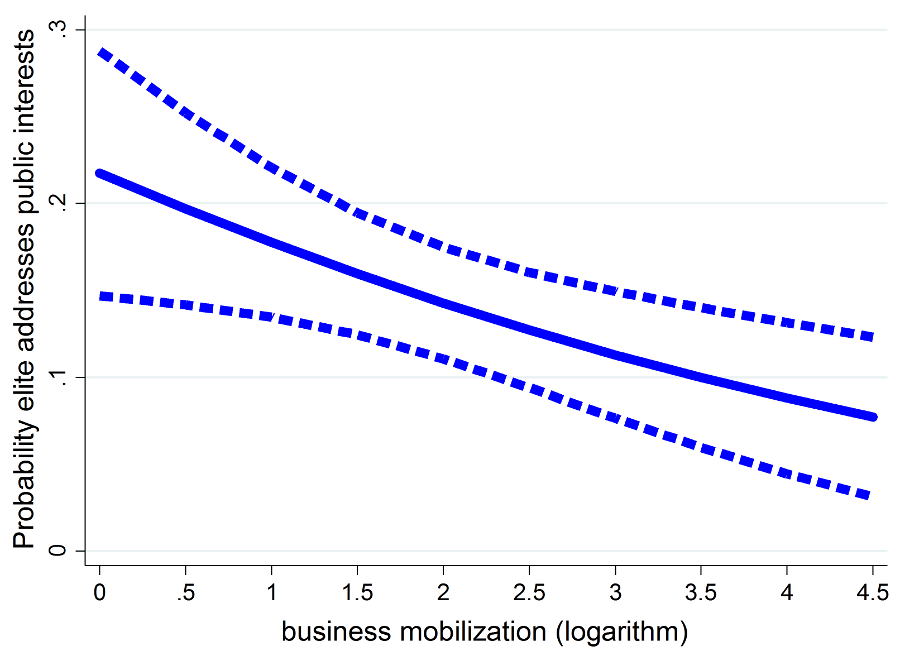 If civil society groups such as Oxfam, Greenpeace or WWF mobilise (Figure 2), EU political elites are more prone to address public interests in the media. When business lobby groups are active, in contrast, (Figure 3) elites are less inclined to address the interests of citizens in the news. These results hold true after controlling for policy area, public salience and the conflictual nature of policy processes in a regression analysis.