The Leave vote prevailed in regions where local workers do not interact much with foreign cultures – yet some of these places rely on jobs created by foreign firms. If internationalisation in the workplace does not match internationalisation ‘at home’, pressure on local workers to opt out from further economic integration increases, write Riccardo Crescenzi (LSE) (left), Marco Di Cataldo (LSE), and Alessandra Faggian (GSSI) in a recent study.

Some of the key questions floating around in the days after the referendum were: why has this happened? Who are the ‘Brexiters’? Several interpretations have been provided, pointing at some common characteristics of the voters who opted for the ‘Leave’ option. It became apparent that the electorate was split according to demographic characteristics, most importantly age and education. The main story that was told was one of cultural values, with an insurmountable generational gap between the younger “Europhile” generation and the older generation attached to traditional British values, and possibly more xenophobic.

Some commentators went as far as to explicitly discard any economic dimension behind the vote, defining Brexit as a purely cultural/psychological phenomenon. However, the emphasis on cultural priors and values offers limited insights on how further political tensions towards international disintegration and isolation might arise in the UK and in other EU member states. Alternative views claim that economic conditions of citizens and the economic geography of UK regions are at least as important as culture and identity to determine individual attitudes towards the EU and voting patterns at the 2016 referendum.

It is now apparent that neither economic nor cultural arguments alone are sufficient to provide a complete picture of the voting patterns on Brexit. Purely cultural explanations of the referendum outcome inevitably rely on the strong assumption that people living in areas such as Bradford, Hull or Sheffield (where Leave prevailed) have more connection, devotion or sense of rootedness to their hometowns than strongly pro-Remain locations such as Manchester, Leeds or Liverpool. Conversely, explanations based on economic motives are hard to reconcile with the fact that – for example – peripheral areas relying more heavily on employment generated by large foreign corporations have overwhelmingly supported Brexit. As an example, in the area of Sunderland only about a third of people voted Remain despite the presence of a “giant Nissan factory which exports more than half its output to the other EU countries”. 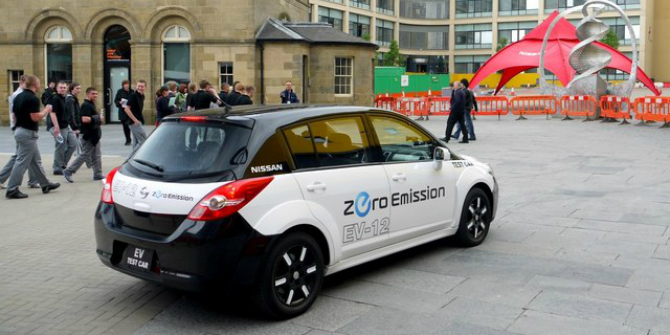 To understand the deep motivations underlying the Brexit vote we need address the following paradox: although local jobs in many UK regions are highly dependent on foreign economic ties, workers in some of these regions openly rejected internationalisation by voting to rescind their links with the EU, the largest integrated market and investment space of the world. Why?

Domestic workers compete with other workers active in foreign locations via the inflow of imported goods (that can be sold on the local market at lower prices than domestically supplied alternatives thanks to cheaper labour inputs) but they might also be employed by the local subsidiaries of foreign firms (or by domestic firms with subsidiaries abroad). In other words, both foreign and domestic multinationals connect local and ‘global’ labour markets, offering the opportunity to work in more internationalised environments, but also fostering competitive pressures on domestic workers. Therefore, it comes as no surprise if some ‘internationalised’ constituencies voted ‘leave’ to ease this pressure.

However, voters’ decisions are influenced not just by their work-place dynamics but also by their social environment. Areas where social ties are more local and inward-looking, where people tend to get along well mainly with close circles of like-minded individuals are less likely to induce a positive and synergistic approach to the internationalisation of the economy. These socio-culturally inward-looking communities are more prone to see their employers’ internationalisation as a (potential) threat to both their values and their economic stability and welfare, and would take any occasion to vote ‘against economic integration’. Conversely, workers that are part of open and outward-oriented local societies are more inclined to bridge different social groups, understand and embrace multi-national working environments given more weight to the benefits of the economic internationalisation of their local area.

Following this line of reasoning, the result of the Brexit referendum can be seen as the result of a process of ‘split Europeanisation’ whereby Euroscepticism is triggered by the increasing mismatch – in specific constituencies – between internationalised firms (and corporate economic interests) and ‘localistic’ employees (and workers’ attitudes and cultural preferences).

Do data on the geography of the Leave vote support this story?

In order to capture the ‘economic internationalisation’ of UK regions and their ‘EU exposure’ we can look at date on in-flows and out-flows of Foreign Direct Investment (FDI). To get a sense of their ‘social internationalisation’ we can rely on a purpose-built ‘Cultural openness’ index, a composite indicator that combines different variables (looking at the propensity of people to travel abroad as well as their proficiency in foreign languages) that can be considered – when put together – as an overall measure for the cultural internationalisation of voters and their international social engagement.

Figures 1 and 2 show descriptive maps and scatterplot correlations of UK regions by the level of ‘social internationalisation’, as defined by our index, the proportion of inward FDI (‘or ‘economic internationalisation’, and the voting outcomes at the 2016 Referendum. As shown by the slope of the regression line in the left-hand graph of Figure 2, higher levels of cultural openness are associated on average with lower percentages of Leave voters. Conversely, the association between economic internationalisation (as captured by FDI) and Leave votes is much less clear-cut. 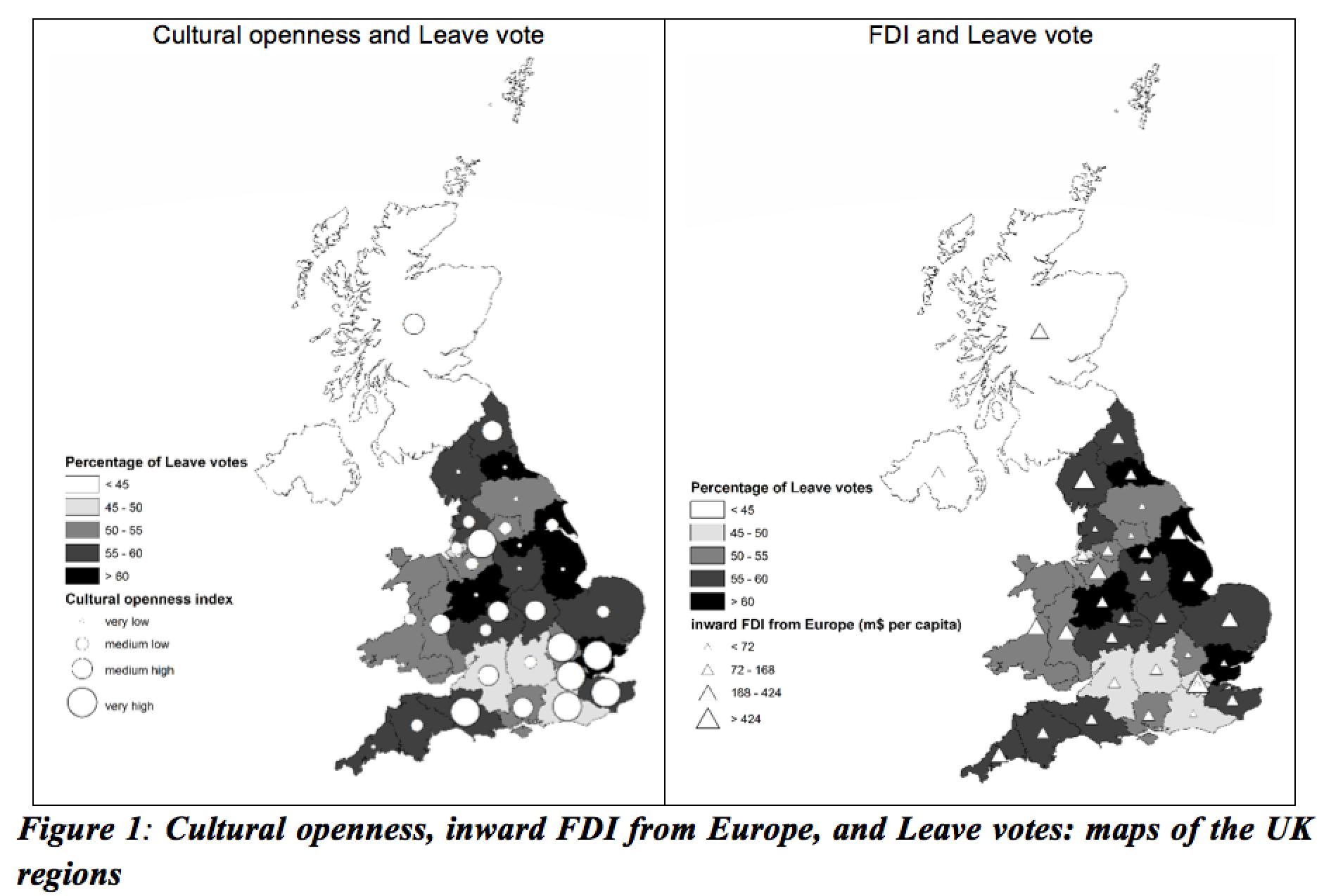 In a recent paper Riccardo Crescenzi, Marco Di Cataldo and Alessandra Faggian show that the interaction between ‘cultural openness’ and ‘economic internationalisation’ is the single most significant predictors of the share of Leave votes when tested against all other alternative explanations of the Brexit vote (from the demographic explanations to education, from immigration to unemployment) touched upon in the ongoing debate.

The degree of internationalisation of the local society – proxied by the cultural openness index – is associated with a statistically significant reduction in the share of voters supporting the UK departure from the European Union. The presence of foreign firms in the local economy also reduces the propensity to vote Leave. However, what seems to be the most important factor to shape local preference for EU membership is the interaction between the economic and the social sphere: the interaction term between the cultural openness index and inward FDI is negative and highly significant, suggesting a strong complementarity between these two dimensions.

These rudimental statistical regularities offer new material for an open discussion on the lessons to be learnt from the Brexit referendum. This matters for a better understanding of the UK society but also – for other EU countries – in order to ensure the political and social sustainability of the process of European economic integration. Even in high-employment countries like the UK, the intensified role of global investment flows and value chains in the economic tissue of EU countries and regions – in particular in the form of the increased presence of foreign firms operating across national borders – poses major societal challenges. If social and cultural attitudes towards integration and internationalisation are not developed in parallel with the globalisation of the economy, tensions are very likely to arise.

This post is based on the article “Internationalised at work and localistic at home: the ‘split’ Europeanisation behind Brexit” by Riccardo Crescenzi (LSE), Marco Di Cataldo (LSE) and Alessandra Faggian (GSSI) forthcoming in  Papers in Regional Science, (DOI: 10.1111/pirs.12350) and freely available (full open access) from the LSE website.  It represents the views of the authors and not those of the Brexit blog, nor the LSE.

Marco Di Cataldo is a Post-Doctoral Researcher at the London School of Economics.

Alessandra Faggian is Professor of Applied Economics at the Gran Sasso Science Institute. 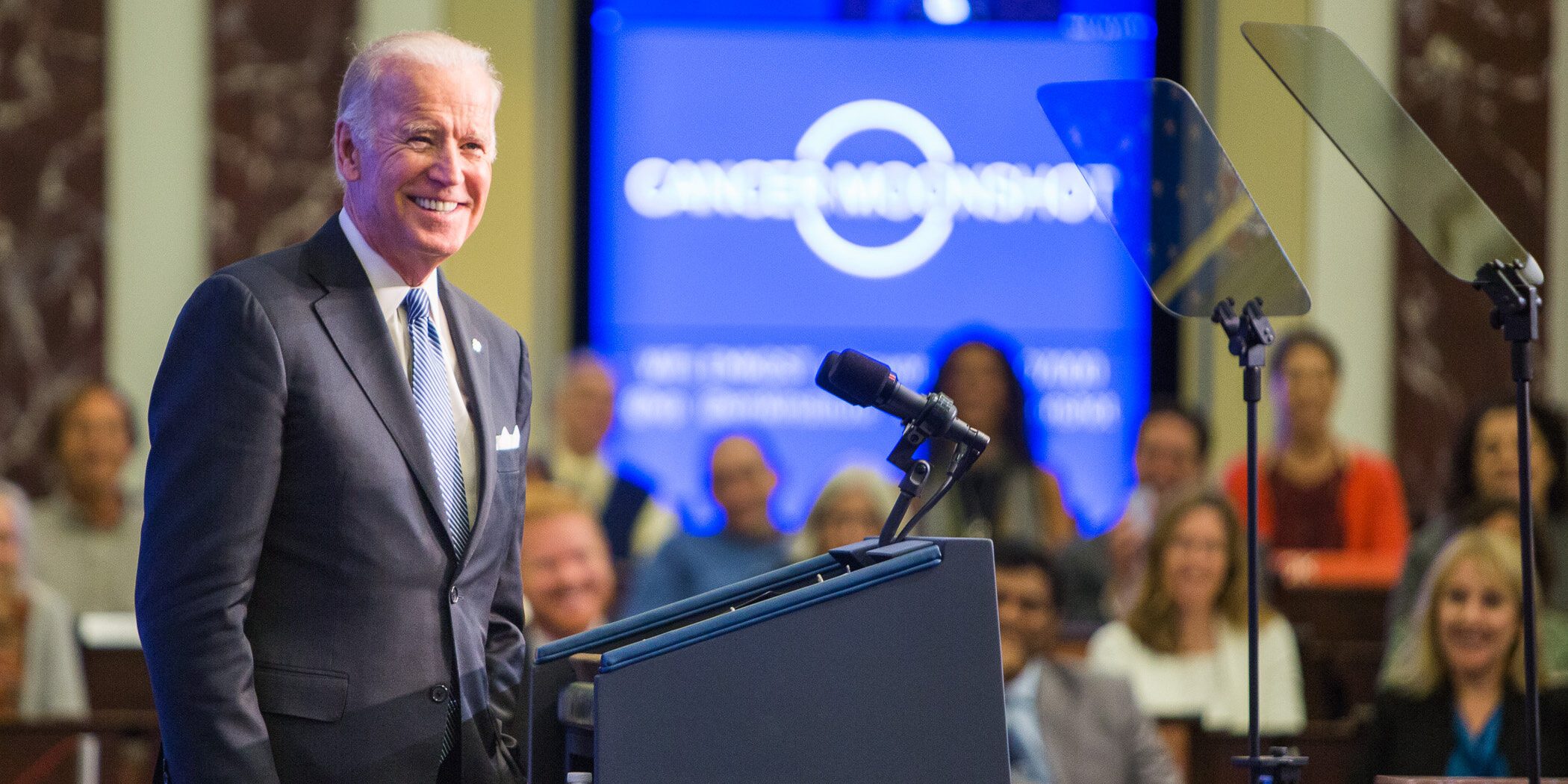 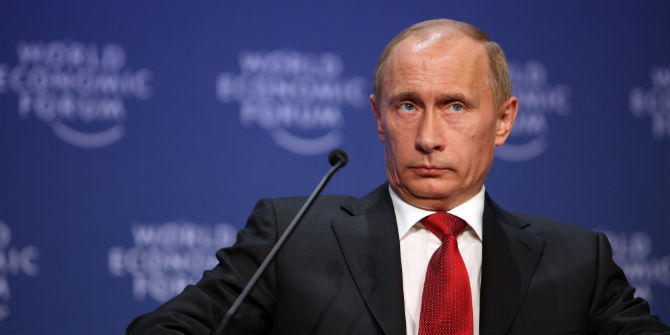 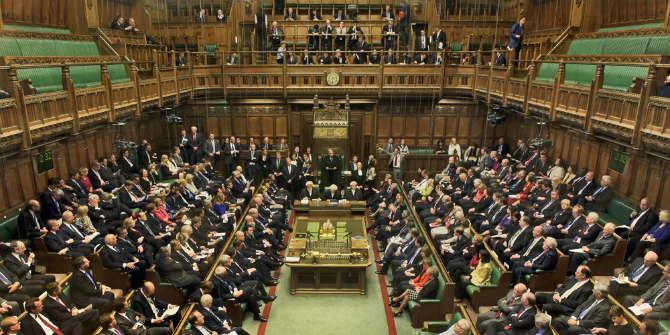