Theresa May’s strategy of procrastination and ambiguity is about to run out, writes Jim Gallagher (University of Glasgow). While she may, even after Salzburg, be able to agree a form of words with Brussels, the fudge involved is now so transparent it is unlikely to satisfy enough MPs to get the deal through Parliament. This makes a disorderly exit – or a second referendum – more probable outcomes.

As the deadline nears, the noise increases and the Brexit options get starker. Theresa May’s strategy of kicking the can down the road, fudging the long-term relationship with the EU in the hope of maintaining Conservative party unity – which I have explained here before – might just have worked, but is probably going to fail. The options are then chaos, or another vote. Here is why, how it is all likely to play out, and what it might mean.

A withdrawal agreement is largely straightforward, and taken down at dictation speed from Michel Barnier. In this, he has not been unreasonable. The UK pays its outstanding debts, deals decently with EU citizens who have made their homes here, and transitions into a new relationship to avoid no cliff-edge in 2019. The difficult bit remains the “Irish backstop”. It gives legal effect to the UK’s promises, made twice in these negotiations and in Treaty commitments to the Republic of Ireland, that there will be no hard border on the island of Ireland. That means no checks for tariff or regulatory purposes on goods crossing the border: anything else – however fancy the technology – is hard enough to matter.

The bit isn’t yet agreed because of its link to the long-term relationship. May would like to fudge it more for that reason: but she’s already promised too much to leave a lot of wiggle room, and in any event the EU made it clear last week that it will insist on a robust legal text – even if the Republic of Ireland loses its nerve in this game of chicken.

All that can be expected before we leave is a political declaration on the new relationship. It is easy to say that the new UK-EU relationship will be different from anything that has gone before and tailored to these specific circumstances. The rhetoric of any declaration will no doubt trumpet this. But in reality there are only two basic models to choose from: like Canada – outside the EU’s customs area and regulatory systems – or inside them, as in the EEA/EFTA relationship. However the new relationship is dressed up, it has to make this choice.

May’s Chequers plan tried to avoid choosing: an ingenious, Heath Robinson, arrangement in which the UK somehow manages to be both inside and outside the customs union at the same time. Maybe in a parallel universe this could have developed over many decades, but isn’t going to happen in this one. Barnier’s warm words about a deal this autumn were all about the Withdrawal Agreement: his reaction to the customs plan was always unambiguously negative , and this was confirmed bluntly in Salzburg last week when May overplayed her hand.

Hence the problem with the Irish backstop. After Britain leaves, it will have an external border with the EU27. This could prove problematic enough if there are to be customs and regulatory checks at Dover. But promising there will be no hard border along the fractal line between the six and 26 counties inevitably implies either that the UK is within the customs and regulatory frameworks of the EU, or some form of border checks across the Irish Sea. May’s strategy throughout has been to pretend this dilemma does not exist, and that an arrangement which avoids the choice will somehow emerge after we leave. Salzburg, and her uncompromising reaction to it afterwards, makes it much harder to pretend that circle can be squared.

At this stage in the negotiation her aim has been a broad, vague, ambiguous political declaration on trade which simply asserts that the new relationship will both be consistent with the Irish backstop and not require an internal border of any sort inside the UK. She hoped to described this as something like “negotiating on the basis of the Chequers package”, but that won’t fly now.

For his part, Barnier would still nevertheless probably buy fudge for now, provided the Irish backstop wording is sufficiently watertight. His negotiating position can only be stronger after we have left. Chequers is not going to happen, and it will be the UK’s problem either to impose an internal border in the event of a Canada deal (which he is offering to make as unobtrusive as possible), or to sell membership of the customs union and single market to the British people. The question is whether the UK Parliament will buy such a pig in a poke.

The endgame in Westminster

Oppositions oppose, so Labour, SNP and the Liberal Democrats will vote against whatever May proposes. Her only hope of support there would lie in proposing to stay in the customs union and single market. She shows no sign of doing that, as it would split her party. (Robert Peel did the right thing for the country over the corn laws, but in the eyes of Brexiteers, splitting the Tory party made it the wrong thing. He must be spinning is his grave)

So May’s plan depends on the small, fragile coalition that constitutes her majority. She needs a form of words, and a legal text for the Irish backstop, which is sufficiently vague to get at the same time the support of the relatively small number of Tory remainers, the larger number of diehard Brexiteers, and of course the DUP. They all have to believe this ambiguous package is going to give them what they want. And as she digs herself in deeper demanding Chequers, she makes it all the clearer that they can’t all be right,

Some Brexiteers – like Michael Gove – take the view that getting out is the big prize, and if necessary the UK can become Canada at a later stage. Others would happily have a hard border in Ireland. But Jacob Rees-Mogg’s European Research group condemned Chequers and the idea of compromise, and the DUP will baulk at anything that hints at a border between Ulster and Britain. Figures like Dominic Grieve, who has fought to get Parliament a decisive say over the deal, will struggle to swallow such blatant ambiguities in the deal.

So it is quite possible May’s strategy of procrastination and ambiguity will come to a screeching halt in Parliament this autumn. It will be her fault. There will likely be a majority against her deal, no majority for any other plan, and certainly none for no deal. In these circumstances, no withdrawal legislation will pass. What happens then?

One possibility is a general election, perhaps after repeated votes of confidence. The party which wants to be sure of winning need only offer another vote on Europe. Alternatively, Parliament could go straight to another vote. Exactly how is not obvious. It is one of the many things May has ruled out, but she could offer the people a choice between her plan and remaining. Alternatively, there could be a high-stakes agreement between Remainers and Leavers that since government cannot negotiate acceptable terms on which to leave the EU, the country has to make a stark choice between remaining and exiting with no deal. We are up against a deadline of next March, but it seems likely that the EU would agree to a deferral for the purposes of a referendum.

Coping with the consequences

Perhaps May will pull it off, and will have demonstrated the tactical guile of a Lloyd George in steering through an impossible set of constraints. But she has shown little sign of that, and it seems likely that the UK will face a choice between reconsidering and a disorderly exit. The inevitable national humiliation of either option less worrying than the complete destruction of trust between large sections of the population and the institutions of national government. The next government will have to address that problem head-on, and deal not just with Brexit, but the causes of Brexit.

Those causes are profound, but historians will see this mess as the consequence of David Cameron and Theresa May putting the unity of their political party above the interests of the country. 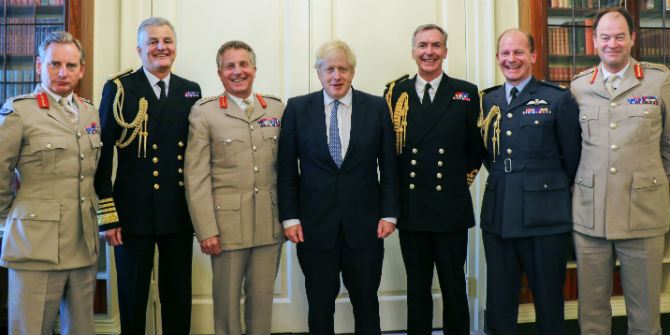