Just how wrong is the Brexiteer view of an anti-market EU? Ask Canada or Australia, write Craig Parsons and Benedikt Springer. Brexiteers have frequently characterized the EU as a regulatory nightmare that impedes Britain’s traditional commitment to global openness and free trade. Well-informed observers generally know this is implausible—the EU is built around deep “single market” liberalisation, and promotes free-trade deals worldwide—but even experts rarely realize just how much the EU stands out for cross-border openness. In many ways, the Single Market now has fewer interstate barriers than the national markets of Canada, Australia, or the United States. Canadian and Australian moves to liberalize their own markets have been directly inspired by the EU model.

One of the salient (though secondary) themes that led to Brexit presented the EU as a straitjacket on Britain’s vocation of openness. In this view, free trade is an invention of the Anglo-Saxons—practiced most purely by the British and their progeny in the United States, Canada, Australia—that the Continentals have generally obstructed. As British tabloids have reported for decades, and as the Ur-free-marketeer Margaret Thatcher came to believe in her later years, the EU is a stifling “super-state”: a bureaucratic, mostly anti-market entity bent on regulating the curvature of bananas and encouraging fraudulent over-production of olive oil. As Theresa May put it in January 2017, “the British people […] voted to leave the European Union and embrace the world.”

This image fits awkwardly with the primary theme behind Brexit: that the EU forced Britain to be open in undesirable ways. Opposition to free movement of people across European borders was the leading edge of the movement. Analyses of the Brexit vote tend to highlight what sociologist (and then-LSE Director) Craig Calhoun described as an anti-openness “mutiny against the cosmopolitan elite.” Brexit appealed especially to less educated, less skilled, and older people who felt threatened economically or culturally (or both) by cross-border flows.

Despite their contradictions, only the marriage of these themes delivered the Brexit baby. Some especially compelling support for this interpretation comes from Dominic Cummings, the maverick political prodigy who orchestrated the Brexit campaign. His frank 20,000-word account emphasizes the contingency of the outcome, and also that any chance for “Leave” depended on combining the “mutiny” with respectable, market-friendly Tory leadership. Immigration and threats to the National Health Service were the winning issues with voters, but many middle-class voters baulked at identifying with Nigel Farage. Though the “Go Global” frame itself was a “total loser” electorally, its traditional-Tory feel helped established figures like Michael Gove and Boris Johnson become the faces of the coalition—and to claim that they carried the mantle of Mrs. Thatcher in so doing. Brexit would restore British sovereignty so it could both control its borders and return to its free-trade vocation.

This blog post argues that the “Go Global” theme was extraordinarily misleading. Many observers have made similar points, both with respect to the EU and Britain’s options outside it. Certainly, the EU has some questionable regulations and subsidies, but it is built around a project of deep liberalization. It actively promotes free-trade deals around the world, with more leverage and success than Britain could possibly achieve on its own. To fully grasp just how wrong is the Brexiteers’ view of an anti-market EU, however, this post briefly compares the EU to the internal markets of Anglo-Saxon federations. Though not even many EU experts recognize it, the EU’s Single Market has surpassed the United States, Canada and Australia in removing internal barriers to exchange. What’s more, substantial recent steps in liberalizing the Canadian and Australian internal markets were unambiguously propelled by the EU model.

Take the latter point first. In 2014 Canada and the EU signed a Comprehensive Economic and Trade Agreement (CETA). Given the many barriers to interprovincial trade (of which more below), it led to business complaints that Canada-EU trade would now be freer than intra-Canadian trade. The Canadian Senate produced a major report titled “Tear Down These Walls: Dismantling Canada’s Internal Trade Barriers,” and in 2017 the provinces and federal government signed a Canadian Free Trade Agreement (CFTA) to open up trade in goods and services, recognize each other’s professional licenses where possible, and end interprovincial discrimination in public contracts and subsidies. Australia went through a similar process twenty years earlier. It was not so directly spurred by negotiating with the EU, but was explicitly and constantly presented as an effort to redress declining Australian competitiveness by imitating the EU’s “Single Market 1992” initiative.

Canadian and even the more advanced Australian efforts still leave more barriers in place than we see in the EU, however—and their legal commitments to open interstate exchange are far weaker. The US case, meanwhile, has stronger legal commitments to open interstate commerce than Canada or Australia, but still much weaker than the EU, and essentially zero political interest or legislative activity to address interstate barriers. The following tables provide a quick and crude summary of this complex terrain, looking first at legal and political principles (Table 1) and then at salient areas of regulatory rules as they stand (Table 2): 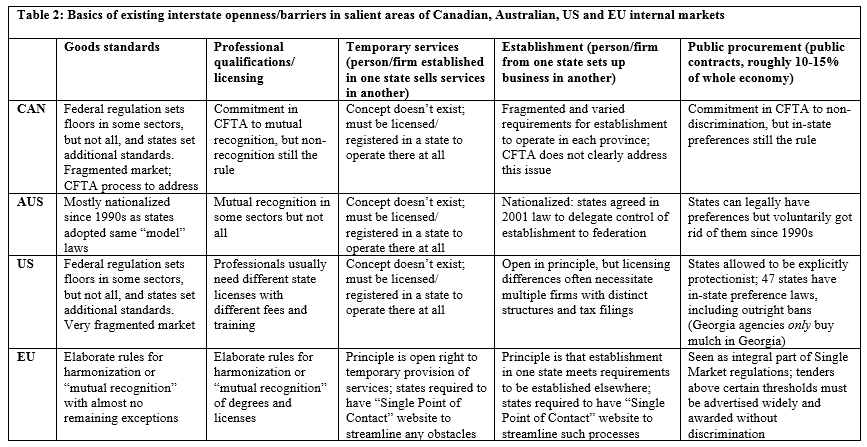 Table 1 highlights that the Anglo-Saxon federations do not require much openness from their states. They generally ban explicit or purposeful discrimination against other states’ people or firms, but have little problem with regulations that only have the effect of impeding interstate commerce while pursuing some other announced goal. The EU, meanwhile, puts a severe burden of proof on all state rules to specifically justify any impediments they raise to interstate exchange or mobility.

If Australia and Canada have now both recognized that their legal principles long permitted “far too many unnecessary regulatory and legislative differences…that prevent the free flow of people, goods, services and investments between provinces/territories” (as the Canadian Senate’s report put it), that recognition has not actually altered their legal standards for openness. Their internal liberalization has been entirely voluntary on the part of the states—using what the EU would call “intergovernmental” mechanisms—thus confirming the states’ authority to back off from openness if they wish. Indeed, the Canadian Supreme Court reconfirmed this principle in the widely-followed “Free the Beer” case decided in April 2018. It held that New Brunswick’s limit on buying beer from other provinces was acceptable despite the constitution’s provision that any province’s goods “be admitted free into each of the other provinces” (section 121). As one lawyer said after the decision, “[Internal liberalization] is going to have to be negotiated by the provinces rather than decreed by the Supreme Court.”

Why the Anglo-Saxon federations have been relatively uninterested in internal market barriers, and the EU so obsessed with them, is a big question that we’re researching now. We’ll try to elaborate in future posts—including arguing that the reasons why the most pro-market American politicians (like outgoing House Speaker Paul Ryan) ignore substantial barriers in their interstate commerce are much like the reasons why Tory free-marketeers dislike the EU. (Both concern opposition to federal authority that trumps—if you will—their desire for economic openness).

For the moment, though, the takeaway is just that Brexiteers would be well advised to consider how strange their characterizations of the EU will sound to their Anglo-Saxon brethren in the Antipodes or the Great White North. In the same time period that anti-EU Thatcherites developed the notion that the EU obstructed true economic openness, pro-market politicians in these other polities concluded that they had to imitate the EU more to reach that goal.

None of this is to say that the EU is a model of economic rationality, or that we personally endorse the EU’s strict requirements for interstate openness. But the EU’s commitment to interstate openness is unambiguously stronger than any other large polity in history, and it has encouraged similar openness elsewhere.

This post represents the views of the author(s) and neither those of the LSE Brexit blog nor of the LSE.