Uncertainty surrounds most aspects of the Brexit negotiations, but in the sphere of sanctions there is a legal framework that provides guidance on what happens after the UK’s withdrawal from the EU. However, writes Anna Nadibaidze (Open Europe), the UK may choose to go its own way on occasion – particularly after situations like the Salisbury poisonings.

The UK will remain part of the EU sanctions regime (which requires a unified position at EU level) until 29 March 2019, after which the Sanctions and Anti-Money Laundering Act should come into effect. With the help of this legislation, the UK will be able to implement its own regime, including financial, immigration and trade sanctions. This will be done independently of the EU and its Common Foreign and Security Policy (CFSP), but in compliance with broader international obligations, including from the UN Security Council.

What should we expect of the UK’s post-Brexit sanctions approach?

In the short term, divergence from the EU on sanctions seems unlikely. Politically, the UK maintains it will be unconditionally committed to European security, and sanctions are more effective when coordinated. There will also be pressure from businesses that operate both in the EU and the UK, which would find it difficult to comply with different sanctions regimes.

In the White Paper published by the Government in July, the UK proposes “consultation and cooperation on sanctions” with the EU, which would include exchanging information and technical expertise, a dialogue on future sanctions regimes and “intensive interaction” to adopt “mutually supportive sanctions, including during crises.”

On the EU side, the European Commission’s chief Brexit negotiator Michel Barnier suggested that there will be “regular consultations for restrictive measures,” adding, “Dialogue and information-sharing regarding EU sanctions will facilitate the UK’s alignment with the EU.”

The exact format that such collaboration could take remains unclear. There is currently no formal structure through which third parties can automatically align with EU sanctions regimes. For instance, Norway, a close European ally, adopts a large amount of EU sanctions, but does so voluntarily and on a case-by-case basis. It also does not have a say in the decision-making process. Norwegian officials hold both formal and informal meetings with representatives of the European External Action Service (EEAS), but there is currently no institutional process through which non-EU countries could influence EU sanctions.

The UK and the EU are likely to reach a pragmatic arrangement if they really understand the mutual benefits of maintaining cooperation on sanctions. The UK’s economic power, the financial importance of the City of London, and its expertise in designing and implementing sanctions will remain important for the EU. Meanwhile, having the support of the EU bloc would be significant for the UK, not only in terms of material impact, but also for symbolic purposes, demonstrating European coordination to external actors in the global arena.

Three Eastern European foreign ministers argued in an op-ed that the UK and the EU should continue working together “to defend joint European interests and values.” Pursuing cooperation on sanctions will be important to make this happen.

On many issues, such as sanctions against Iran, the UK is more likely to stay closer to the EU. Prime Minister Theresa May, along with French President Emmanuel Macron and German Chancellor Angela Merkel, expressed criticism of the US leaving the Joint Comprehensive Plan of Action nuclear agreement and subsequently re-imposing wide-ranging sanctions.

At the same time, future UK governments could feel inclined to diverge on sanctions, particularly in response to specific crisis situations. There is concern that in the future, EU sanctions could be “more damaging to UK economic interests.” Or they might not be fully aligned with the UK’s political interests. The UK may also be able to respond more quickly than the EU27. The fact that the EU needs to reach consensus for extending measures often leads to them being less restrictive than what the UK would wish for.

This question has become especially relevant following this year’s nerve agent attack in Salisbury. The responses to this crisis demonstrated that there will be cases in which the UK would be ready to go beyond EU measures. Until now the EU has been consistent in its approach to sanctions on Russia, but this does not exclude some European member states, such as Hungary and the new government in Italy, either claiming that sanctions have a negative effect on trade, or pushing for “more dialogue” with Russia.

Divisions were visible when Foreign Secretary Jeremy Hunt called for tougher EU sanctions on Russia in August. Most European countries expelled Russian diplomats after the attack in solidarity with Britain. But only last week did EU foreign ministers reach agreement on a new sanctions regime to react to the use and proliferation of chemical weapons – without mentioning Russia specifically, due to the concerns of some member states such as Italy.

Meanwhile, the US has implemented new sanctions specifically in response to the Salisbury attack. Hunt called the EU to stand “shoulder to shoulder” with the US, suggesting that the UK’s approach to sanctions might be closer to the US on this occasion.

In response to the Salisbury events, MPs from both sides of the Commons supported a “Magnitsky amendment” to the Sanctions and Anti-Money Laundering Act in order to target those who commit human rights violations. The UK has become one of the very few EU countries enacting legislation inspired by the US Magnitsky Act, which implements asset freezes and visa bans against several Russian officials. To the frustration of many MPs, the amendment will only be applicable after Brexit.

More recently, after the opposition asked the government to use the Magnitsky powers against Saudi officials implicated in the murder of journalist Jamal Khashoggi, Hunt had to point out that this could not be done yet and that the UK is talking “to EU partners about how we can act collaboratively using EU structures” to respond.

In the future, the UK could therefore be more inclined to following a similar “model” of current US-EU cooperation, where there is broad US-EU engagement, including through constant communication both through EEAS and bilateral channels, but without formal commitment to align exactly on everything. In the case of responding to Russia’s attack in Salisbury, the US went ahead with further sanctions. Similarly, the UK could use the post-Brexit opportunity to diverge on specific measures in the future, while maintaining broad cooperation and alignment with the EU position.

At the moment the UK and the EU understand the necessity of maintaining a close relationship in foreign policy and demonstrating commitment to European security after Brexit. But in future crises like the Salisbury attack, the cyber-attack on the Organisation for the Prohibition of Chemical Weapons (OPCW), or human rights violations such as Khashoggi’s murder, the UK will have to make strategic choices about how it uses the tool of sanctions for its own foreign policy goals.

Anna Nadibaidzie is a research and communications associate at the think-tank Open Europe, where her work focuses on future UK-EU security relations and European foreign policy.She holds an MSc in International Relations from the London School of Economics. 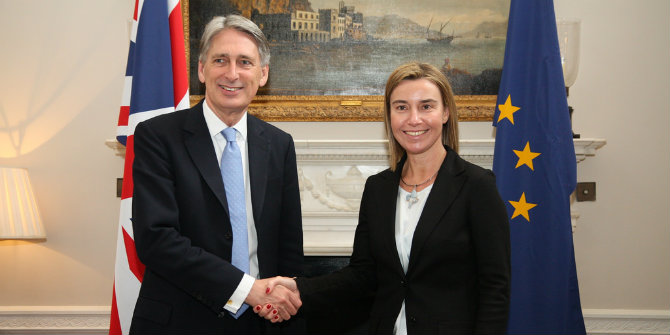