The UK’s proposed mode of separation from the EEA Agreement is riddled with legal flaws, writes Michael-James Clifton (EFTA Court). He contends that the draft EEA EFTA Separation Agreement is improperly structured in terms of its Contracting Parties, and that there are competence problems as regards its substantive scope. In this post, he addresses the draft EEA EFTA Separation Agreement’s brittle provisions on entry into force, and the implications of the potential for extension of the Article 50 TEU period.

In a previous blog post I argued that the UK has not notified its intention to leave the EEA as required. This post addresses in depth the construction of the ‘EEA EFTA Separation Agreement’ agreed on 20th December 2018 and its significant problems. To date, the EEA EFTA Separation Agreement has been ‘agreed,’ but not ‘signed’. The EEA EFTA No Deal Citizens’ Rights Agreement published on 8th February 2019 will be the focus of a separate article.

As the long title to the draft treaty, and both the First and Fourth recitals to the EEA EFTA Separation Agreement make clear, the UK government takes the consequences which flow from Article 126 EEA beyond what that provision may bear as I have argued previously. The EEA EFTA Separation Agreement appears to apply a notion of implied and constructive withdrawal from the EEA Agreement based on the UK’s withdrawal from the EU. The First and Fourth recitals read:

As I have discussed in that previous post, the UK government’s argument effectively runs that once the UK has left the EU, as per Article 126 EEA the ‘territories to which the [EU treaties are] applied’ will shrink to exclude the UK. By interpreting and relying on Article 126 EEA in this manner, the UK government deprives the specific withdrawal provision, Article 127 EEA, of any effect, contrary to the teleological method of interpretation of the EEA Agreement. Moreover, the basic structure of the EEA EFTA Separation Agreement is inherently problematic: the UK purports to leave a mixed multilateral agreement with thirty other Contracting Parties, as well as the European Union, without written notification, and to resolve its immediate relationship by seeking to enter into a treaty with only three of the EEA’s Contracting Parties. 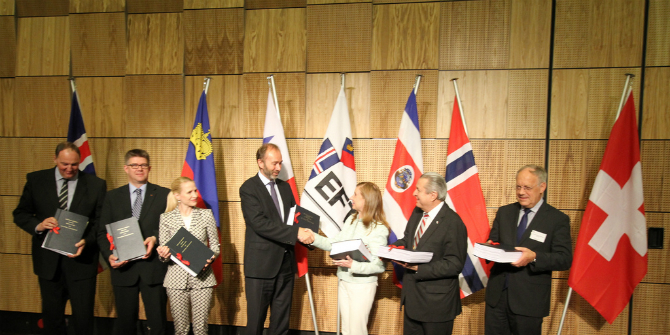 Title III poses a different competence problem. Remarkably, Title III of the EEA EFTA Separation Agreement (Articles 49 to 54) concerns ‘Ongoing Police and Judicial Cooperation in Criminal Matters’. The EEA Agreement does not include Justice and Home Affairs provisions, nor the Schengen Implementing Convention. Iceland, Liechtenstein, and Norway are separately party to the Schengen Implementing Convention and other agreements either on a bilateral or multilateral basis with the EU (e.g. the Agreement between the European Union and the Republic of Iceland and the Kingdom of Norway on the surrender procedure between the Member States of the European Union and Iceland and Norway (which is an extension of the European Arrest Warrant mechanism)).

These competence problems are manifold. For instance, it is difficult to see how the UK having left the EU could continue to hold itself out as a party to an ‘Agreement between the European Union and the Republic of Iceland and the Kingdom of Norway’ – a treaty concluded by the EU in an exclusive capacity – without the EU being a contracting party to the EEA EFTA Separation Agreement, or unless specifically authorised by a ratified UK-EU withdrawal agreement. This point may be addressed by the UK-EU Withdrawal Agreement’s Note Verbale (COM(2018) 841 final):

However, this is not fully satisfactory as it requires contracting parties to accept the EU-UK’s position, which may not be in their own sovereign interests (cf. the objections raised against the EU’s and UK’s WTO schedules amendments (Bryce Baschuk on 9th October 2018 for Bloomberg, and the Secretary of State for International Trade’s written statement [HCWS1128])).

The entry into force and application

In order for the EEA EFTA Separation Agreement to enter into force, its Article 71 provides that:

3. In relation to an EEA EFTA State depositing its instrument of ratification, acceptance or approval after this Agreement has entered into force, the Agreement shall enter into force on the day following the deposit of its instrument.

4. Parts Two and Three, with the exception of Articles 18 and 42, as well as Articles 64 and 68, shall apply as from the end of the transition period.’

The proposed ratification of this treaty, particularly in the dualist countries of Iceland, Norway, and the UK, will take a certain time. Liechtenstein is a monist country, and so will presumably be in a position to deposit its ‘instrument of ratification, acceptance or approval’ rather swiftly. Yet, the agreement may only enter into force on 30th March 2019 so long as by that date the UK and one of the three EEA/EFTA States have deposited their own instrument of ratification with the Norwegian Government as the agreement’s depositary (Article 70, second paragraph EEA EFTA Separation Agreement). This places substantial pressure on the national ratification procedures.

In order for at least the UK’s and one EEA/EFTA State’s instrument of ratification or equivalent to be deposited with the Norwegian Government by 30th March, the various national procedures must be underway almost immediately. This requires the various national ratification procedures to be conducted irrespective of the political discussions in Westminster, and between the UK government and the EU concerning any extension to the Article 50 TEU period. The UK government, for wont of time, will need to conduct the ratification procedures of the EEA EFTA Separation Agreement in parallel with the continuing EU negotiations. As a result, a number of potentially remarkable scenarios may occur: –

1) The Article 50 TEU period is extended. The UK and/or any of the EEA/EFTA States fail to deposit instruments of ratification by 30th March, and the treaty fails to enter into force. The EEA Agreement enters into abeyance vis-à-vis the UK (this point will be addressed further below).

2) The Article 50 TEU period is extended. The UK and/or one EEA/EFTA State deposit instruments of ratification by 30th March. The treaty enters into force. As a Member State of the EU, the UK may well be considered to have contravened the duty of sincere cooperation under Article 4(3) TEU (see Advocate General Sharpston’s Opinion in Opinion 2/15 concerning the EU’s Free Trade Agreement with Singapore, footnote 29). Likewise, the relevant EEA/EFTA State may well be considered to be in breach of Article 1 EEA for seeking to treat an EU Member State in a manner different from all other EEA Contracting Parties.

3) The Article 50 TEU period is not extended. The UK withdraws from the EU on 29th March. The UK and/or any of the EEA/EFTA States fail to deposit instruments of ratification by 30th March, and the treaty fails to enter into force. The EEA Agreement enters into abeyance vis-à-vis the UK (this point will be addressed further below).

4) The Article 50 TEU period is not extended. The UK withdraws from the EU on 29th March. The UK and/or one EEA/EFTA State deposit instruments of ratification by 30th March. The treaty enters into force. The UK is no longer a Contracting Party to the EEA Agreement.

It is difficult to specify what may occur were the EEA Agreement to enter into abeyance vis-à-vis the UK. The UK would still be a party to the EEA Agreement, but the Agreement would not be operable vis-à-vis the UK (reasons addressed here). Unquestionably, there would be substantial legal problems. The level of difficulties for EEA/EFTA citizens in the UK and vice versa would presumably depend upon what the UK government did in that situation. The UK could, unilaterally, state that it will treat EEA/EFTA citizens in the same, positive, manner as EU citizens. UK citizens in the EEA/EFTA States presumably would need to rely on their pre-existing rights of permanent residence (if obtained), and on the goodwill of those countries. Unless otherwise provided for, there would also likely be substantial contractual problems in cross border commerce, and difficulties inter alia in recognising and enforcing judgments. Indeed, even in Scenario 4 above, in which the UK withdraws from the EU and the EEA EFTA Separation Agreement enters into force, a great deal of controversial litigation is likely to be brought before the national courts.

The UK government’s policy of creative ambiguity towards withdrawal from the EEA Agreement ended when it ‘agreed’ the EEA EFTA Separation Agreement, a draft treaty, which as this post has shown, has numerous, possibly insurmountable legal flaws.

This blog post is based on part of the author’s forthcoming article. The author would like to thank in particular Arabella Lang, Parliament and Treaties Hub, House of Commons, and Dr Jack Simson Caird, Senior Research Fellow in Parliaments and the Rule of Law at the Bingham Centre for the Rule of Law, for their invaluable comments and knowledge. All errors remain the author’s own.