There is deadlock over Brexit because the “will of the People” is contradictory, argues Anthony McGann (University of Strathclyde). The people voted to leave the EU, but do not support any of the feasible Brexit options. This paradox is an example of a social choice problem called the “Discursive Dilemma”. The only way out is a referendum that asks the people exactly what they want.

We are in a deadlock because the people voted to leave the EU, but does not support any of the feasible ways of doing it.

This paradox could simply be due to the fact that public opinion has changed in the last three years, and is no longer in favour of leaving the EU. There is evidence from the opinion polls that there has been a slight movement toward Remain. However, even if the public still supports leaving the EU, it is still possible for a majority to be against both options that make Brexit possible. This kind of paradox is called the “discursive dilemma”. It has been applied to political science by the political philosophers Christian List and Phillip Petitt. Note that this paradox is slightly different from the Condorcet paradox that has been discussed by Simon Kaye and Stephen Fischer. That paradox resulted from a situation where a majority prefers Deal to Remain to No Deal, but prefers No Deal to Deal. The opinion polls show that we do not currently have a Condorcet cycle of this kind.

The most common illustration of the discursive dilemma involves three judges deciding a case by majority rule. It is possible for a majority of judges to decide a case one way, even though they make findings of fact (by majority vote) that logically imply the opposite verdict. Suppose there are three judges.

Of course, this example is a gross simplification. In reality, 48% of the electorate voted to remain in the EU. Of the 52% who voted to leave, a very large number undoubtedly support both forms of Brexit. There may also be some voted who support neither Deal nor No Deal, but voted Leave because they believed some other kind of deal would be possible. The table below gives this more plausible scenario. 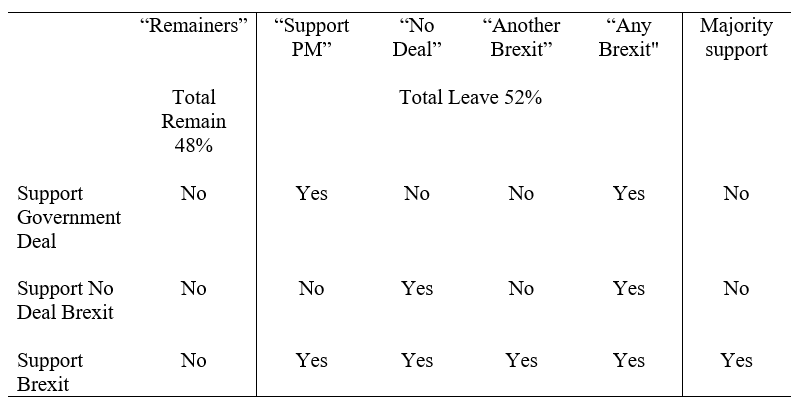 In the scenario, about 48% of the electorate are “remainers”, as in the actual referendum. Unless nearly all of the 52% who voted leave support both Deal and No Deal Brexit, it is entirely possible we have a “discursive dilemma”. That is to say, a majority (52%) supports Brexit, but a majority opposes both leaving with a Deal and leaving with No Deal. We have shown that it is possible for a majority to support leaving the EU, but at the same time reject either of the practical ways of achieving this. Thus we should be really careful about talking about “the will of the people”. But do we have such a paradox in reality?

In the last available opinion poll to ask about support for No Deal, Remain beat No Deal 55%-45% (“don’t know” and “will not vote” excluded). A poll taken by the same organization at the same time (YouGov, 15 March 2019) had Remain beating the Deal 58%-42%. More recent polls have put the margin at least 55%-45%. This is consistent with the “discursive dilemma” paradox. However, most polls now suggest that there is a small majority in favour of not leaving the EU at all (the YouGov poll 19 March 2019 had support for “remain” at 53%).

However, it does not really matter whether there is currently a majority in favour of leaving the EU, because the result of the referendum trumps any opinion poll. Many MPs, including some who supported Remain, feel bound by that result three years ago. The problem is, that current public opinion does matter when they vote on leaving with the Deal or with No Deal. The referendum did not and could not establish that there was a majority in favour of leaving with the Deal or leaving without a Deal. And this is the source of the current deadlock.

The only way out (without disregarding the “will of the people”) is to ask the people exactly what they want. That means a referendum where the people are given the choice between the specific Brexit alternatives and remaining in the EU

This post represents the views of the authors and not those of the Brexit blog, nor the LSE. Image by Stelita. Permission is granted to copy, distribute and/or modify this document under the terms of the GNU Free Documentation License.

Anthony J. McGann is Professor of Government and Public Policy, University of Strathclyde.