The UK is in a strange political limbo. It appears that we are simultaneously in Brexit paralysis, whilst also hurtling headlong towards 31 October, when Boris Johnson has promised we will leave the EU ‘do or die’. But much remains uncertain – not least, what will be the immigration regime for EU citizens entering the UK post-Brexit? Helen McCarthy (Middlesex University) writes about the mismatch between income and labour market position when defining highly skilled migration.

As yet, we do not know exactly what the new immigration system for EU migrants coming to the UK post Brexit will look like. But indications have come both from a report by the Migration Advisory Committee (MAC), and from the Government’s 2018 White Paper on immigration. In this paper, the Government stated: “Following the advice of the Migration Advisory Committee (MAC), we will prioritise skilled migrants. A skilled-based migration policy will ensure the UK remains a hub for international talent from the EU and the rest of the world.”

This naturally raises the question: how does one decide who is ‘skilled’? The MAC proposal suggests extending the employer-based sponsorship with minimum income requirement model that is currently used for non-EU citizens to those coming to the UK from the EU. The income threshold is currently set at £30,000 per year, and the Migration Advisory Committee has suggested extending this requirement to EEA citizens while dropping the overall cap on the number of Tier 2 visas that can be granted. There would be only temporary schemes of 12 months for those considered ‘low skilled’ and these temporary visas would not lead to settlement. This income level has received quite a lot of media attention, and recently there have been further calls for the level to be set even higher at £36,000 per year. This, it should be noted, is in the context in which the UK’s average household income is £29,400 per year. Family reunification is also likely to become much more restrictive for EU citizens as current rules applied to other immigrants are extended.

As it stands, these proposals are for future migration from the EU. EU citizens already in the UK do not have to meet these requirements to continue living in the UK. However, the proposals raise the question: how many would have been able to meet such criteria had they been in place at the time of their arrival? My doctoral research with Spanish citizens can give some indications for this specific group.

The Office for National Statistics estimates that there are 176,000 Spanish nationals living in the UK, meaning that Spanish nationals just scrape into the top ten of most common overseas nationalities. In spite of this, surprisingly little research has been done with this group. My study set out to examine a number of aspects of the lives of Spanish citizens in the UK, particularly their labour market positions. In order to do this, I conducted an online survey, receiving over 400 responses, and did follow-up interviews with Spanish citizens who had come to the UK in the last five to seven years. My research reveals how landing on a specific definition of ‘skilled’ is by no means straightforward.

My findings show that this population is young and well-educated. Just over two-thirds had a university education. If holding post-secondary education is a definition of skilled – then this is overall a ‘skilled’ group of migrants. Further, most had come to the UK to work, with 70 per cent of respondents citing ‘work’ as one of their motivations for their move and 90 per cent were in employment. However, if we define the ‘skilled’ based on income, the picture looks quite different. While just over one in ten earn over £50,000 per year, the majority of my respondents – six out of ten – earn less than £25,000 per year. By this measure, many of these people would not be able to move to the UK under the proposal above. Nevertheless, many of this group are working in what would usually be classified as ‘skilled’ jobs. In fact, different income levels are found across a range of different occupations as can be seen in figure 1. 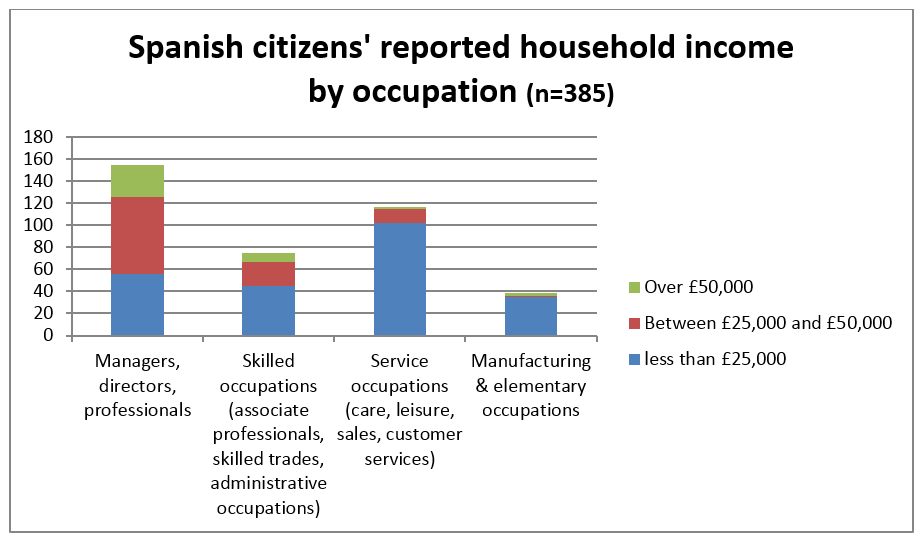 The graph reveals how large numbers of Spaniards have been successful in getting jobs in professional occupations, and are in fact overrepresented in these occupations. However, this does not necessarily mean that people are earning above the £30,000 threshold. This is perhaps not surprising, given that for instance nurses’ starting salaries are currently in the region of £24,000 per year, with a similar level found for newly qualified teachers. Other skilled professionals also start below the magic 30k threshold, with junior doctors starting around £27,000 per year and in many cases junior barristers also starting on low salaries.

The truth is skills are defined by context and ‘highly skilled’ is a mutable category which people can move in and out of. Claudia, one of my interviewees, provides a good example of this. Having arrived in the UK as a qualified nurse but with little work experience, she looked into registering as a nurse in the UK. However, due to delays with the paperwork she never completed the registration, working instead as a waitress, a job many would consider ‘low skilled’. After spending some time in Australia, she came back to the UK, immediately getting a job in retail at the make-up counter of a large popular shop. She enjoyed this role for several years, but having tired of the low pay and long hours, she once again investigated registering as a nurse. After completing a ‘Return to Practice’ training, she quickly got a job as a surgical nurse, a role in which she has been working and progressing for the last few years.

Her story highlights how people’s pathways in the labour market are not always linear. In the first few years of her working life in the UK, she had filled roles which are often described as unskilled, despite being highly educated. But by the time of my interview with her, she had progressed into a ‘skilled’ professional role in a sector facing a large number of shortages. This sort of progression was fairly common among my participants. Freedom of movement gave people the opportunity to move, and develop along the way, gaining the skills that allowed them to move into better paid, ‘skilled’ jobs. (An opportunity that many young Brits also availed themselves of when moving to the EU). Under the proposed future scheme this opportunity would disappear.

More broadly, the question of how to define ‘skills’ for the purposes of immigration highlights the difficulty of designing policy that takes account of the complex reality of people’s lives. As the landscape of work changes, it is not straightforward to design an immigration regime that can balance competing interests: the requirements of industry for a ‘flexible’ workforce and the public’s desire for ‘control.’ As the research above highlights, income level does not always match with occupational level, showing one of the problems of using it as part of the definition of ‘skilled’ migration. If the current proposals go ahead, the UK will likely miss out on attracting young, ambitious individuals who may not yet make it into that ‘skilled’ bracket.

This post represents the views of the author and not those of LSE Brexit, nor LSE. The names in the blog have been changed to protect identities. Image: Public domain.

Helen McCarthy is a doctoral candidate at Middlesex University. Her research interests include processes of integration, belonging and multiple citizenship. Her recent work has looked at Brexit’s potential implications both for Spanish nationals in the UK and for older British citizens living in the EU.  She is on Twitter at @1helenmc.