Brexit opens a Pandora’s box of security, defence, and foreign policy issues. Cornelia-Adriana Baciu (Johns Hopkins University) argues that the UK’s future global position will depend on a series of factors: international cooperation in the defence industry, the UK’s vision of internal security (including Northern Ireland), the country’s future commitments to European security and foreign policy (CSDP/CFSP) and NATO.

Future relations and cooperation at the industrial level

In the 2020s, we can expect EU countries to work on developing their capabilities within the framework of the European Defence Fund and Permanent Structured Cooperation. The intensity of their contributions will depend on national ambition and on the EU Multiannual Financial Framework. Future common declarations will boost EU-NATO cooperation and strategic dovetailing beyond the cyber domain, and streamline responses to internal and external challenges. For the UK, European multilateral mechanisms (e.g. the European Intervention Initiative and the European Defence Fund) might be appealing – to increase interoperability and diversify defence procurement, but also to tailor responses to global shifts in a context of genuine multipolarity, rising great power competition and crises in Europe’s near and far neighbourhoods.

Future EU-UK defence cooperation at industrial level will most likely depend on an agreement on regulatory convergence, for example on data protection and aircraft safety. The European Defence Agency is one potential avenue for prospective cooperation. What remains to be seen is whether a potential EU-UK agreement in this domain will replicate existing administrative agreements with Norway, Switzerland, Serbia or Ukraine, or whether the two will negotiate an unprecedented association agreement permitting a British (informal) role in decision making structures appropriate to the contributions and phase of the cooperation. The Political Declaration of 09 December 2019 defining the parameters of ambition concerning future relations set the scene for a “broad, deep and flexible partnership across trade and economic cooperation with a comprehensive and balanced Free Trade Agreement at its core, law enforcement and criminal justice, foreign policy, security and defence and wider areas of cooperation”. However, Switzerland and the EU have been negotiating a comprehensive agreement for the last ten years, and an agreement on the specific terms is not yet in sight.

The reanimation of the Letter of Intent Framework Agreement Treaty signed by defence ministers of six leading European states manufacturers of defence technology (France, Germany, Italy, Spain, Sweden and the UK) might offer Britain an informal place in shaping decision-making about future defence cooperation in Europe. However, reanimating this framework might be challenging due to the parallel sixth-generation combat aircraft programmes Future Combat Aircraft System (involving France, Germany and Spain) and The Tempest (between the UK, Italy and Sweden). The UK might also participate in European Defence Agency programmes and procurement projects, if these were conducted by the Organisation for Joint Armament Cooperation (OCCAR), of which the UK is a member. However, findings in my recent book reveal that while intergovernmental armament collaboration suggests EU institutions have a modest impact, as per Art. 15.6 of the Administrative Arrangement between OCCAR and the European Defence Agency, specific provisions of this collaboration can be reviewed if a non-EU state becomes a member of the organisation.

But is the UK willing to participate in the European Defence Agency at all?

In the July 2018 policy paper on the future relationship with the EU, the UK explicitly expressed its intention to collaborate on future joint security and defence projects in the framework of an Association Agreement, and this is reiterated in the Revised Political Declaration of October 2019. While the UK indicated an interest in participating in the Permanent Structured Cooperation, “the UK (…) wants to see it in a way that is coherent with NATO”. Theoretically, the Permanent Structured Cooperation would fulfil this condition, as capabilities developed in this framework can be made available to NATO or the United Nations. Notwithstanding, future British collaboration in European structures might encourage the EU to define more clearly how NATO, European Defence Fund, and the Permanent Structured Cooperation harmonise and complement each other.

The questions do not end here. In the context of wider geopolitical tensions, how likely is the UK to participate in the European Defence Fund? The Regulation of the European Parliament and of the Council establishing the European Defence Fund (Art. 10) does not exclude cooperation with non-associated third-countries or entities, as long as EU interests are not jeopardised. Such cooperation is contingent on the third-country entity operating on EU territory (unless activities require otherwise), not having the authority to impose restrictions on activities, having conditioned access to sensitive classified and declassified information (Art. 10), and would require granting access to the European Anti-Fraud Office and European Court of Auditors so the EU’s financial interests can be protected (Art. 34 of the European Defence Fund Regulation). At a first sight, little access to decision making and the deployment of resources (subventions might reach 80%) might dissuade the UK government from participating, even though joint projects could increase both actors’ competitiveness in the global defence market. If an agreement is reached with the British, this might become relevant to other third countries such as the US, which is mostly sceptical about participation in the EDF. But if the UK were to manage to negotiate a good deal, the US and perhaps Norway and other third countries might follow.

“The UK would not extend the implementation period beyond December 31, 2020, and any future partnership must not involve any kind of alignment or European Court of Justice jurisdiction”, said Boris Johnson during a meeting with Commission President Ursula von der Leyen. This begs the question of whether the short period of negotiations will be sufficient to enable continued cooperation in the framework of the over 40 mechanisms of EU-UK cooperation on internal security and judicial issues on criminal matters. These mechanisms pertain to data exchange and cross-border operational cooperation and exchange of criminal records, such as Europol, Eurojust, European Criminal Record System, Passenger Name Records, Schengen Information System. Most of this cooperation has no precedent with third countries. Accepting the authority of ‘EU rules’, particularly the ECJ as a dispute settlement mechanism, had been a taboo for Johnson, and any ECJ prerogative within UK’s jurisdiction beyond the end of 2020 is perceived by the British government as preventing it from ‘taking back control’. While the July 2018 UK policy paper acknowledged the need to “respect the remit” of the ECJ in the cases in which UK participates in EU agencies, this shall not grant jurisdiction over the UK, the document stipulated.

Implementation of the Northern Ireland Protocol of the Withdrawal Agreement will be another issue of crucial importance for both the UK and the EU, with a recent report from the Institute of Government warning that the UK government is “almost certainly unable to implement it by December 2020”. In a worst-case scenario, this could result in the UK being subject to infringement proceedings at the ECJ and unrest in Northern Ireland. The changing perspectives of sovereignty in Northern Ireland, highlighted by the shift in the discourse on Irish unity on the island of Ireland and the results of the recent Irish elections, were an “unforeseen outcome” for the UK, with Sinn Féin leader Mary Lou McDonald declaring that if her party joins the governing coalition, there will be a referendum on a united Ireland.

Will the UK be able to contribute to EU missions after the transition period ends? As per the Revised Political Declaration of October 2019, a future arrangement between the EU and the UK should enable the UK to participate in EU missions on a case by case basis via a Framework Participation Agreement that shall not infringe EU autonomy and UK sovereignty. If the UK were to contribute to a specific EU mission, it will be granted access to the Force Generation Conference, Call for Contributions, and the Committee of Contributors meeting to allow information exchange relevant to the mission. So the revised Political Declaration meets the UK request to have “access to planning documents” and other insight details, as outlined in the July 2018 policy paper. As per Art. 100 of the revised Political Declaration, the level of interaction and exchange of information between the parties needs to correlate with the stage of the planning process and the UK’s level of contribution.

Most importantly, what will be the UK’s future NATO strategy, and how will the ex-EU member state position itself between the EU and the US? The place of the UK in NATO will likely depend on the new British national strategic concept, but also on how UK objectives relate to the NATO Forward Presence and operations in Europe, as well as to power projection and stabilisation in Africa and the larger Middle East region, where NATO is conducting missions and support operations. In the long term, the UK’s position on the Euro-Atlantic spectrum will not only depend on its new strategic interests, but also on where NATO’s transformational journey ends up. For NATO, the big challenge in the future will be the ability to deal with multiple different tasks – from collective defence, Turkey and the defence of the southern flank, to terrorism, China policy, Russia, arms control, cyber warfare and, now, space and climate. “One of the issues is that NATO has been used to being in the lead, and to be supported by other partners – in Afghanistan for example”, one high-level ex-NATO official told me during field research across Europe last year. Currently, many operations are civilian-led, particularly in the hybrid domain, with NATO playing a supporting role. This is a big cultural change for an organisation which used to be a leader, he added.

And we can expect more unknowns in the future relations puzzle. Post-Brexit, the UK could morph into the EU’s closest partner after the US. But worse than known unknowns are the unknown knowns: could the EU security and defence structure become the post-Brexit institutional mechanism for integrating autonomous actors such as Britain and NATO into a broader European security eco-system? Despite its weaker military capacity, the EU can offer coordinating mechanisms with diplomatic strategy, as well as trade and development cooperation, in which NATO has limited capabilities. It could also act as a counterbalance to the Trump administration’s limited engagement with NATO, but also as a channel to address new strategic challenges such as China’s growing influence – a task which was recently included in the NATO London Declaration of December 2019.

According to the German ambassador to the US, Emily Haber, the UK has played a pragmatic, pro-active and mediating role in the Euro-Atlantic security landscape, and its departure from the EU will certainly leave a void. With every enlargement, the EU gained from each new member’s experience, whether it was post-Soviet, or Mediterranean. When the UK leaves, it is expected to take its global experience and outlook with it.

Any stable and evolutionary post-Brexit strategy in the Euro-Atlantic region needs to move beyond instinctive preferences and should double down on cooperation with global actors and organisations. These can be sources of relevance and diplomatic interaction in the context of genuine multipolarity and great power competition.

This article draws on Cornelia-Adriana Baciu’s co-edited book, Peace, Security and Defence Cooperation in Post-Brexit Europe. Risks and Opportunities. This post represents the views of the author and not those of the Brexit blog, nor LSE. Image: Public Domain. 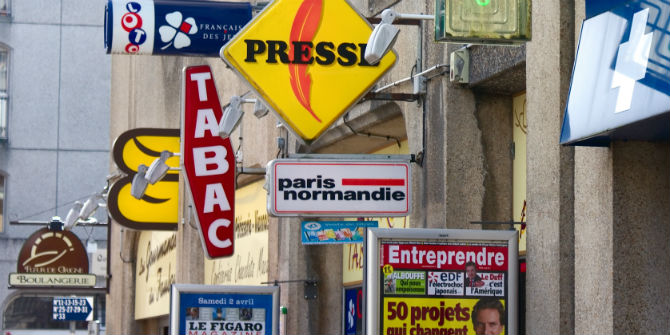