Almost half of businesses report that COVID-19 has negatively affected their ability to prepare for Brexit. More than half listed uncertainty on the future arrangements between the UK and EU as a limitation on their ability to prepare for Brexit. This is higher than the proportion who listed COVID-19 as a limiting factor and far higher than any other factor. Furthermore, over 80 per cent of businesses are concerned about the implications of the Transition Period ending on 1st January 2021. Josh De Lyon, Swati Dhingra, and Edoardo Tolva (LSE) argue that COVID-19 has significantly disrupted businesses’ ability to prepare for Brexit but the greatest constraint on preparation has been the lack of clarity on the UK’s future relationship with the EU.

The spread of Covid-19 has hit businesses across the world. It has caused a shrinking of aggregate demand, supply chain difficulties, and massive uncertainty. At the same time, the UK continues to negotiate its future relationship with the European Union and significant changes will come into place in less than one month. The possibility of No Deal has still not been ruled out.

Our analysis shows that the importance of reaching a deal with the EU is more important than ever for UK businesses. New data on how businesses are preparing for Brexit, while simultaneously coping with the largest economic shock for a century, suggests that only 59 per cent of UK businesses consider themselves to be at least “somewhat prepared” for a No-Deal Brexit, while 81 per cent would be somewhat prepared for a Deal. Businesses also report that their Brexit preparation has been harmed by COVID, with 47 per cent of businesses reporting that Covid has negatively affected their ability to prepare for Brexit.

The economic costs of a No-Deal Brexit are known to be severe. Our data suggest that the differences between achieving a deal – even the shallow relationship that is currently being discussed – relative to a No Deal are stark. As many as 69 per cent of firms expect a No-Deal Brexit to negatively impact their business, while only 23 per cent say that they will be harmed in the case of a deal.

Figure 1 shows the responses of businesses across different industries to surveys conducted in September and October by the Confederation of British Industry (CBI). The industries that have been hardest hit by COVID are: Arts, Entertainment and Recreation; Accommodation and Food Services; Administration; and Transportation and Storage. In all of these industries, more than half of firms expect to be negatively affected by a No-Deal Brexit. The industries in which the highest proportion of firms have reported that their Brexit preparations were negatively affected by COVID are: Manufacturing; Arts, Entertainment and Recreation; Wholesale and Retail; and Transportation and Storage. The effects of Brexit – particularly in the case of No Deal – will hit some sectors hard, on top of the impacts already experienced through COVID. For example, in the transport industry, firms report that Covid has caused a 27% reduction in business volume on average and, even though 84% of firms are prepared for a No Deal, 54% of them say that Covid has harmed their ability to prepare for Brexit and a staggering 74% of them still expect the impact to be negative.

Figure 1: Survey responses by industry. Notes: The average percentage impact of COVID on business volume is weighted by the employment band of the firm. Columns 2-6 report data for October, while column 7 reports data for September. Data from the CBI business surveys.

Existing research suggests that the incentives to sign trade agreements are higher when the trading environment is more uncertain. COVID-19 has exacerbated economic uncertainty, in addition, to directly harming most firms. This has come on top of the existing lack of clarity on the details of the future relationship between the UK and the EU. In particular, the possibility of No Deal on the future relationship has still not been ruled out, with less than a month until the end of the Transition Period. Businesses have reported that this uncertainty has been the main factor affecting their ability to prepare for Brexit, marginally ahead of COVID-19, as is shown in Figure 2. This is a staggering result: the government’s failure to provide clarity to businesses over the future relationship has been a greater hindrance than the largest global economic shock for a century in terms of firms’ ability to prepare for the future. The figure also shows that other factors, such as time to prepare, are far less of a concern to businesses. 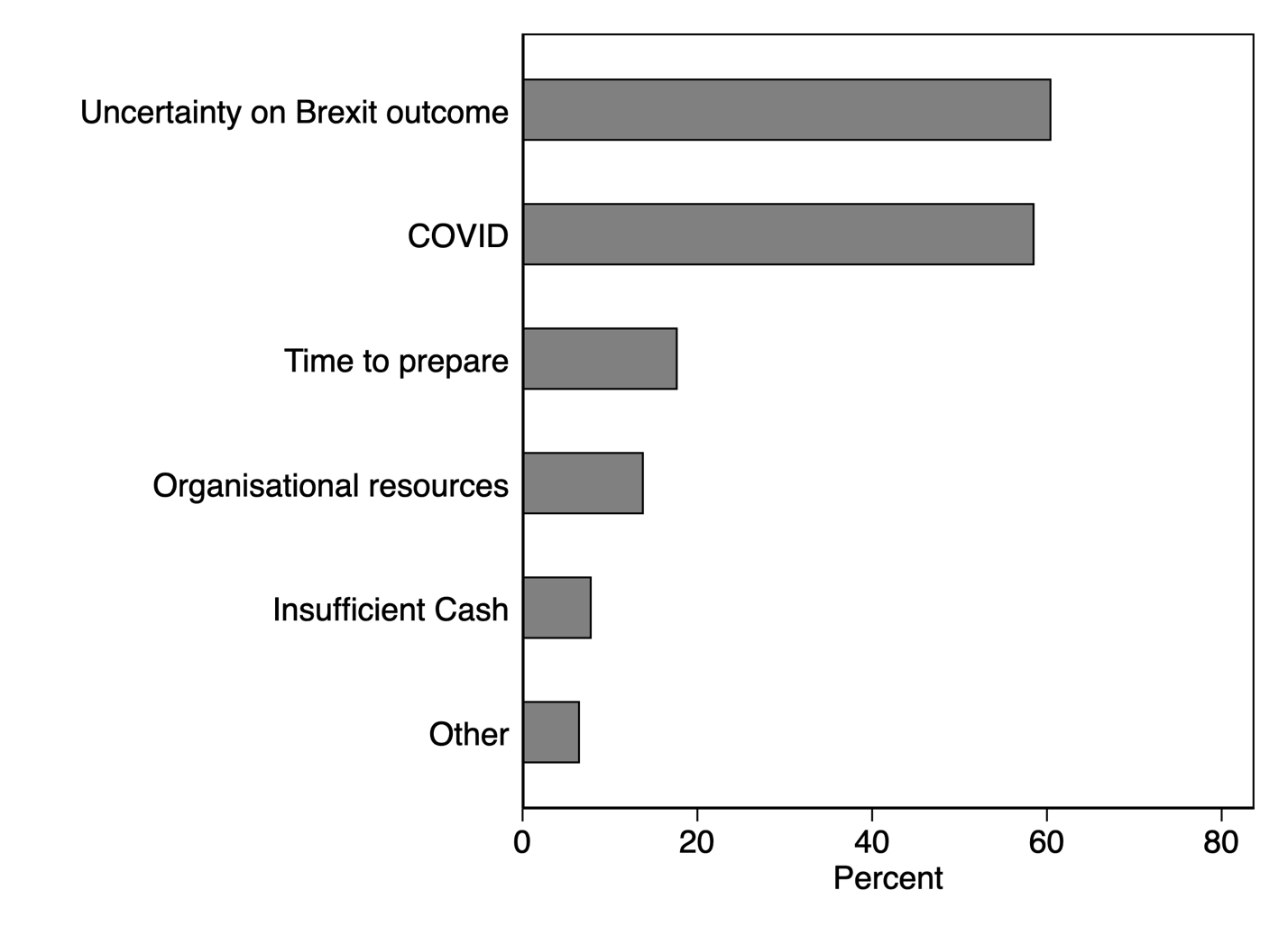 Figure 2: Most important factors affecting Brexit preparations. Notes: the survey question asks “What are the greatest challenges facing your business in preparing for the end of the Brexit transition period on 1 January 2021 (please select all that apply)?” The response options are: “Current or future impact of COVID-19 on your business”; “Uncertainty regarding outcome of UK/EU negotiations”; “Lack of time to prepare”; “Insufficient cash reserves for preparations”; “Insufficient organisational resources for preparations”; and “Other (please specify)”.  Data from the CBI business surveys.

The changes that occur on 1st January will be substantial and far-reaching. Businesses are highly concerned about many of these changes. Figure 3 shows that more than 80 percent of firms are at least somewhat concerned about six different factors. At the top of the list is delays at the border, which proved to be a major issue last week when France trialed its post-Brexit checks, causing a 5-mile queue in Kent. Another issue of concern is price rises and, somewhat relatedly, exchange rate volatility. Following the vote to leave the EU in 2016, the pound experienced the biggest overnight depreciation in any major currency since the collapse of the gold standard in the 1970s. Businesses experienced a rise in imported input costs with no offsetting increase in export revenues. They appear to be concerned that this may happen again.

The third area of particular concern to businesses is around tariff and non-tariff barriers to trade that will arise on 1st January. Trade barriers will increase, even if a deal can be agreed upon. However, a deal is likely to at least maintain zero-rate tariffs between the UK and EU across almost all sectors, which would benefit UK exporters to the EU as well as UK importers and households. The UK has stated its tariff schedule post-Brexit, with average rates in some sectors such as food as high as 20 percent. The fact that such a high percentage of businesses remain concerned about tariff increases indicates that there remains a lack of certainty over a future arrangement. On top of this, the deal is unlikely to have a thorough coverage of non-tariff barriers, such as regulations, and additional costs of importing and exporting with the EU are almost inevitable. The bulk of UK employment is in services, where tariffs do not apply and future non-tariff barriers will be key to the day-to-day functioning of businesses and their ability to access the large EU market. 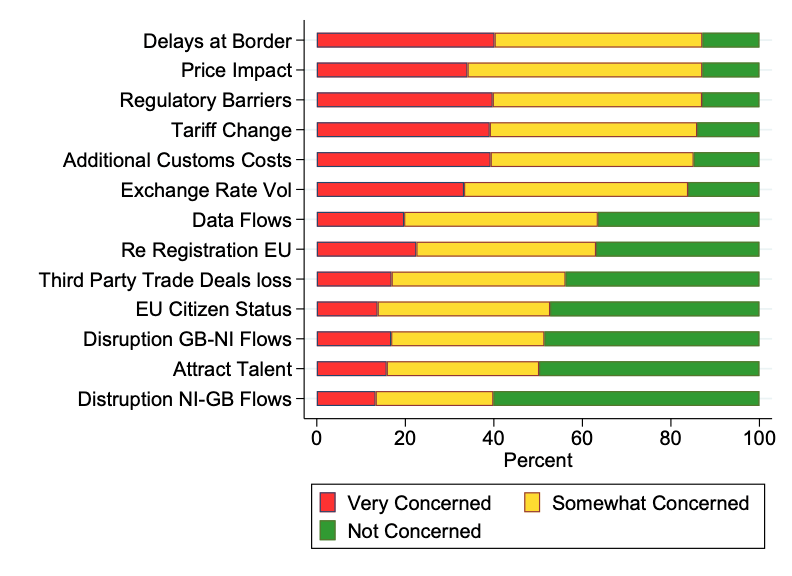 Figure 3: Factors of concern when the Transition Period ends on 1st January 2021. Notes: the survey question asks: “After the end of the transition period on 1st January 2021, how concerned are you about the following potential implications?” The response categories are listed on the y axis. Data from the CBI business surveys.

Our analysis shows that COVID-19 has harmed firms’ ability to prepare for Brexit, but that the biggest constraint on their ability to prepare is still the lack of information over the future relationship with the UK’s biggest trade and investment partner. The consequences of No Deal are severe and the spread of the pandemic has only increased the importance of agreeing a deal. Businesses are concerned about a wide range of implications of leaving the EU on 1st January, and the economic implications are likely to be significant.

This blog post expresses the views of its author(s), not the position of the CBI, LSE Brexit Blog or the London School of Economics. Financial support from the CEP and ESRC grant [ES/V007270/1] is gratefully acknowledged. This research is funded by the Economic and Social Research Council (ESRC) as part of the UK Research and Innovation’s rapid response to COVID-19.

Josh de Lyon is a DPhil Economics student at Oxford University and a Research Assistant at the Centre for Economic Performance, LSE. 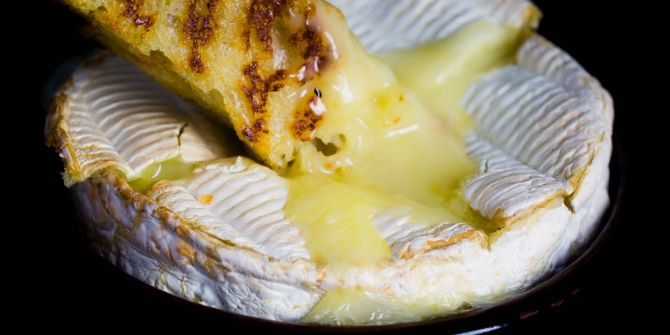