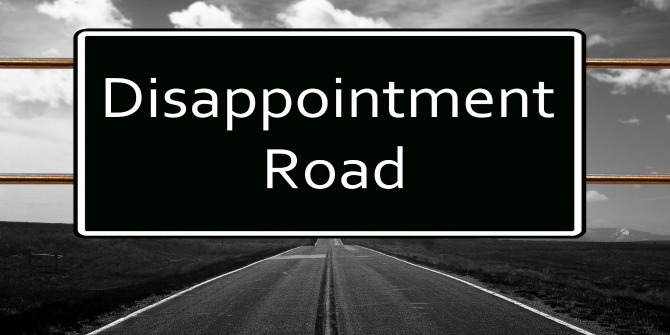 Image by geralt, under a CC0 licence

I begin most of my lectures by telling students I intend to disappoint them. I tell them I look forward to the moment when they realise that I have failed to live up to their expectations of me. Their fantasy of me as the all-knowing, all-powerful leader who will teach them what they need to know despite their creative attempts to avoid the anxiety of ignorance and will grade them at precisely the right mark to ensure a worthy grade point average will be punctured. It’s just a matter of when. It’s at that point that we meet as real, frail, complicated, human entities struggling to learn something together.

Inevitably that opening statement meets with some pushback. What do I mean I will disappoint? Surely it’s my job to be an exemplary role model? They’ve paid a lot of money to be in my class and I have no right to lower their expectations!

Towards the latter end of my career as an organizational consultant, before I entered academia, I also adopted this stance. Assuring clients that I could never live up to their idealised expectations of who I was and what I could deliver. The best I could do was the best I could do. No more, no less.

These days, in educational and organizational settings doing the ‘best I can do’ is perceived as ‘not good enough’. In order to survive, and thrive, I need to offer more than the best. I need to provide satisfaction with a money back guarantee.

The tyranny of satisfaction reigns everywhere. We are frequently ‘outraged’ and ‘disgusted’ when services fail to meet their emphasis on customer satisfaction. Organisational members who exceed targets by 10 per cent this quarter are rarely cheered on and told to take it easy for the next quarter. Next quarter’s target has now been increased by 10 per cent, which becomes the new normal.

Increasingly organisations are investing time, resources (human and financial) in an attempt to generate positive work environments. This optimal organizational form is a sanitized, rationalized environment where prescribed feelings prevail and positivity guarantees productivity. Excelling and exceeding are the cultural norms; disappointment and failure are relegated to the margins (Fineman, 2006).

Disappointment is characterised as a negative emotion, considered to be unproductive, undermining of morale and a justification for inertia (van Dijk and Zeelenberg, 2002, van Dijk et al., 2003, Zeelenberg et al., 1998, Zeelenberg et al., 2000). In addition, it’s not as powerful as anger or envy so doesn’t merit much attention in organizational settings. Disappointment is viewed as a contaminant and as something that must be managed out of organizational systems if it isn’t to undermine effectiveness and productivity. Disappointed individuals are simply victims of circumstance and disappointed organisations have failed in their mission. Whichever way we turn, disappointment points to failure of self or other to live up to expectations.

Yet most of us at some point have encountered disappointment. It lives in the personal stories and lives of individuals who cope with unrealistic organizational demands. It lives in the absentee rates and mid-life depression suffered by those who imagined their careers would have turned out differently.

The psychoanalyst Melanie Klein in her work with very small children pointed to a developmental stage which she called the ‘depressive position’ (Klein, 1975). This is the moment when babies realise that their carer is both satisfying and disappointing at the same time. The same person feeds the child when she is hungry and fails to hear the child’s hungry cries at other times. Our capacity to tolerate this imperfection in others and, eventually, in ourselves is a milestone in the maturation process. Splitting the world into good and bad serves a useful purpose when we are overwhelmed by anxiety but it only serves to maintain the illusion of all good and all bad if we are unable to tolerate the middle ground of disappointment.

Likewise in organisations: Disappointment is systemically generated when the fantasy of the all good, 24/7 available, target-busting organisation is perceived to he the norm and is not challenged. Individuals metabolise the experience on behalf of the wider system allowing it to delude itself that ever-increasing targets are realistic.

Disappointment is the moment at which the fantasy of ‘what we should be’ meets the reality of ‘what we are’. Disappointment is data about unrealistic expectations and is also a clue to the systemic conditions in which those conditions are generated. Disappointment is also an invitation to reimagine attainable and realistic goals and targets. Yet too often organisations get stuck in the blame/shame aspects of disappointment. Locating blame in other departments; feeling the shame of being the disappointing team member who let the team down during a presentation. This dynamic is a toxic mix that further relegates disappointment to the edges of organizational systems.

How then can we learn about and from disappointment? My research suggests that ‘mourning the future’ is the key component in this process: Taking the time to grieve and learn about the hopes and dreams contained in that idealised fantasy of the future (Clancy et al., 2012). What is wrapped up in the expectation of an ideal lecturer? Brilliant boss? The next great contract? Being available 24/7 for customers? What is it we are afraid of losing if we let go of that dream? In bringing the fantasy into reality it is possible to relinquish attachment to its power and reimagine a future that is achievable and more realistic.

When my students have concluded their ‘outrage’ and ‘indignation’ at the temerity of their lecturer proffering ‘good enough’ conditions; we get on with the messy and ordinary task of learning together. Often exceeding our expectations but rarely blaming each other for failing to live up to imaginary standards beyond the realm of reality.

Annette Clancy is a lecturer/assistant professor of Organisational Behaviour at University College Dublin Ireland. She earned her PhD at the University of Bath where her doctoral research investigated disappointment (frequently assumed to be a ‘negative’ emotion) and explored how it might be reimagined as a catalyst for organisational learning and creativity. She received her MSc from the University of Sunderland where she studied systemic organisation and management. The focus of Annette’s research is on emotion in organisations and in particular how unconscious dynamics influence and inform how work is performed. Prior to joining UCD Annette ran her own organisational consultancy practice for over 17 years. She consulted to and coached senior executives in over 100 organisations cross the public, private and not for profit sectors in Ireland, the UK and the USA. Prior to her consulting career Annette held senior management positions in the cultural sector in Ireland and the UK.