Without it, the cost of climate change mitigation will increase, argue Damien Dussaux and Maria Carvalho 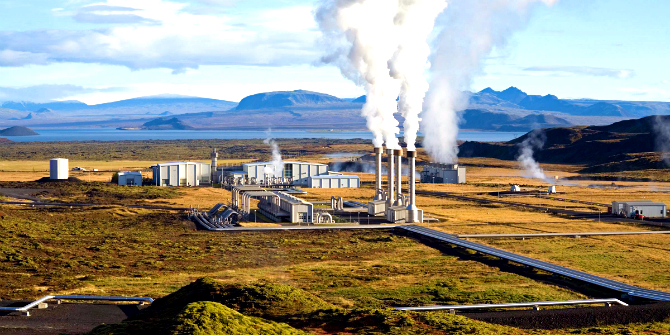 The Government has made it clear in its White Paper that the UK will not be seeking membership of the Single Market after it leaves the European Union, but it will pursue “an ambitious and comprehensive Free Trade Agreement”.

The White Paper also states: “The UK’s climate action will continue to be underpinned by our climate targets as set out in the Climate Change Act 2008 and through our system of five-yearly carbon budgets, which in turn support our international work to drive climate ambition”.

To achieve the UK’s climate change targets cost-effectively, the Government will have to pursue a free trade agreement in low-carbon equipment with the European Union. Without this, the cost of climate change mitigation in the UK will increase.

The UK relies on the European Union for low-carbon ‘equipment’, such as wind turbines, solar panels and other components, which help to reduce greenhouse gas emissions. The UK’s reliance on such technologies from the European Union is greater than for all commodities as a whole. Figure 1 shows a comparison of the UK’s main trade partners for all goods and for low-carbon equipment.

The UK’s trade deficit in low-carbon equipment is a sizeable £1.2 billion.

Figure 1. UK trade for all goods and low-carbon equipment 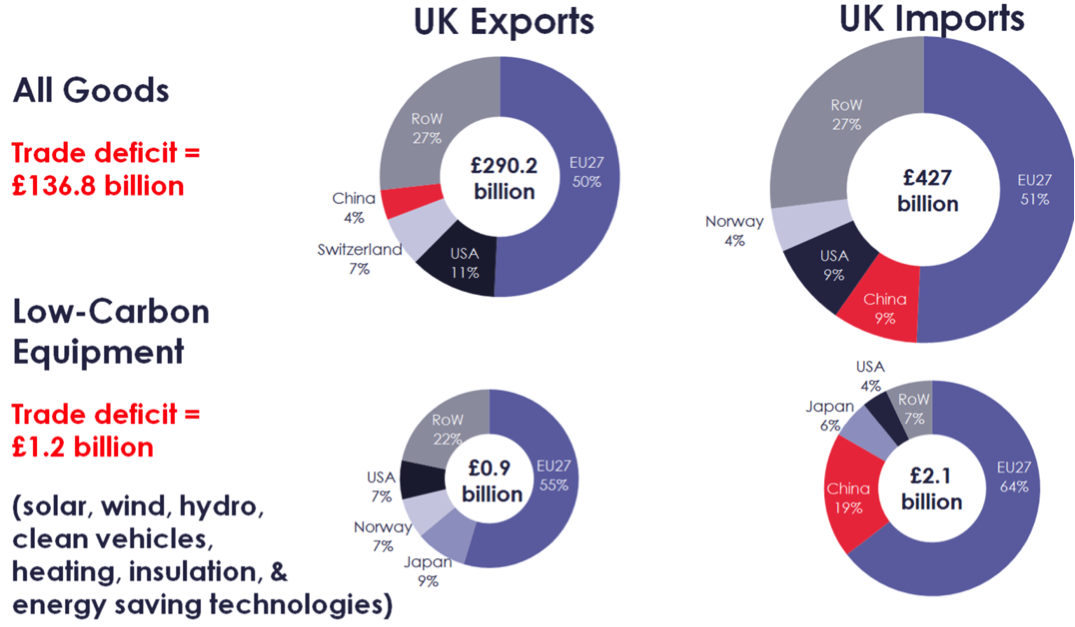 The UK has a trade deficit with the European Union for most low-carbon technologies including wind power, solar photovoltaics, heating, cleaner lighting, solar thermal, and insulation (see Figure 2). In contrast, the UK exports significantly more cleaner vehicles to the European Union than it imports.

Figure 2. UK trade for low-carbon equipment with the European Union 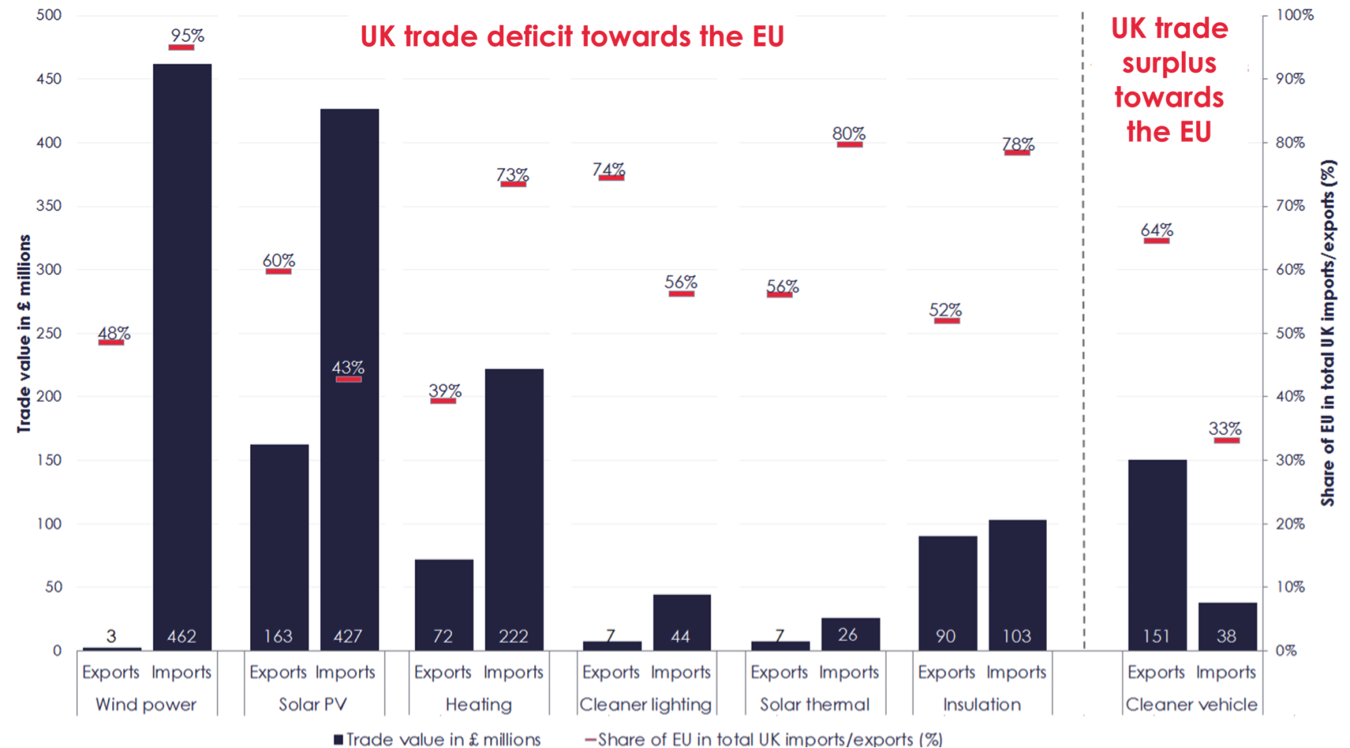 Source: Author’s calculations from the United Nations COMTRADE database. Values are averaged over 2011-14.

There is a strong global movement towards free trade in environmental goods. Since 2014, the European Union, China, United States, and many other member countries of the Organisation for Economic Cooperation and Development have been negotiating a plurilateral Environmental Goods Agreement (EGA). The EGA aims to cut duties on products used in a variety of environmentally-related functions including solar photovoltaics, solar thermal, wind power, and energy saving.

The UK may need to re-negotiate the terms of its membership of the World Trade Organisation when it leaves the European Union, but it will have to slash duties for goods covered by the EGA once it is in force. However, cleaner vehicles and some low-carbon equipment used for heating, insulation, and lighting, are not covered by the EGA. To keep the reductions of greenhouse gas emissions cost-effective, the UK will need to pursue a free trade agreement with the European Union for the goods that are not included in the EGA.

Given the UK’s substantial trade deficit in relation to many climate change mitigation technologies, failure to secure a free trade agreement with the European Union would have two consequences. It would significantly increase the cost of the low-carbon equipment used by the UK economy, and it would reduce the transfer of climate mitigation technologies towards the UK, such as wind power.

Increasing trade costs associated with wind power technologies would undermine the progress made in reducing overall project costs through technology improvements and experience. Analysis commissioned by the UK’s Committee on Climate Change demonstrates that without policy clarity and strong competition from offshore wind equipment in the European Union, the UK would not be able to double the cost reductions for offshore wind by 2030 that are expected under the existing scenario, which was formulated prior to the Brexit decision. Furthermore, analysis by Bloomberg New Energy Finance suggests that unsubsidised onshore wind generation could compete with fossil fuels in wholesale electricity markets in the UK by as soon as 2018.

From the advances in technology and cost reductions we infer that both onshore and offshore wind generation in the UK will stop requiring subsidies within 15 years, thereby providing a more cost-effective avenue for the UK to meet its 2030 emissions reduction target.

Price competition provided by wind components from the European Union will be essential to realise this goal and to reduce the cost burden on UK electricity consumers. Buying wind components from other export economies, such as China, is not an attractive option because of high shipping costs, and less efficient turbines.

According to the report of the Clean Energy Manufacturing Analysis Center, the UK only had the capacity to produce 1gigawatt (GW) of land-based towers for wind in 2014 – however the demand for other wind components, such as turbines, was 1.7GW in the same year.

It is clear that the UK is heavily reliant on imports from the European Union, worth £462 million and constituting 95% of wind imports to the UK, to meet the demand for wind technologies.

Preserving UK’s growth opportunity in the production of cleaner vehicles

The UK should pursue free trade in low-carbon equipment with the European Union not only to keep emission reductions cost-effective but also to realise opportunities for economic growth. One such opportunity is in the manufacture of hybrid and electric vehicles.

According to the International Energy Agency, the demand for electric vehicles in the European Union (excluding the UK) could grow twentyfold between 2015 and 2020.

It is unclear whether the UK, if it leaves the Single Market, will face a tariff on cleaner vehicles at the border of the European Union. A Most Favoured Nation tariff of 10% is applied by the Member States to imports of electric and hybrid vehicles from members of the World Trade Organisation that have no bilateral agreement with the European Union.

Preserving UK access to the European Union’s market would also help the UK to reach its commitment of deploying 2.1 million electric vehicles by 2020, as part of the Electric Vehicles Initiative, a multi-government policy forum, which includes the other Member States, as well as China, Japan and the United States. This is because there are significant economies of scale in the automobile industry. Access to the European Union’s market could lower the average production cost and retail price of electric vehicles in the UK, making the switch away from diesel vehicles more attractive in terms of price. Such advances can act to lower the cost of climate change mitigation in the UK’s vehicle fleet.

It is clear that the free trade of low-carbon equipment with the European Union is currently important for the UK’s growing low-carbon sectors. As the UK prepares to leave the Single Market, the Government should be vigilant about the impact on low-carbon trade, both to safeguard the feasibility of emissions targets and to realise opportunities for economic growth.

Damien Dussaux is a Research Officer at the Grantham Research Institute on Climate Change and the Environment at the London School of Economics and Political Science.

Maria Carvalho is a Policy Analyst at the Grantham Research Institute on Climate Change and the Environment at the London School of Economics and Political Science.