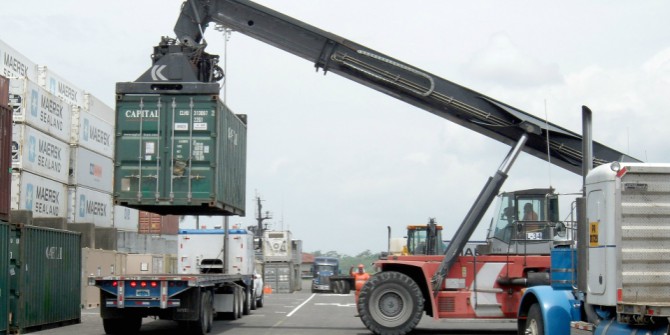 The introduction of containers in UK shipping in the late 1960s suddenly and profoundly changed the labour market for dock workers. Containers require far fewer workers to load and unload cargo, and therefore they greatly reduced the employment of dock-workers (also known as stevedores or longshoremen).

Containerisation had other impacts on UK ports as well. Port activity became much more concentrated in a few locations, rather than being distributed widely around Britain. Containers required deep-water ports and integrated road and rail networks. Many older ports (such as the Port of London) were unsuited to the new technology and declined, while new ports expanded in more suitable locations such as Felixstowe. Figure 1 tracks employment in the port industry and in dock workers’ occupations in Great Britain between 1961 and 2011. Employment in both the industry and the occupation collapsed in the wake of the containerisation of British ports. 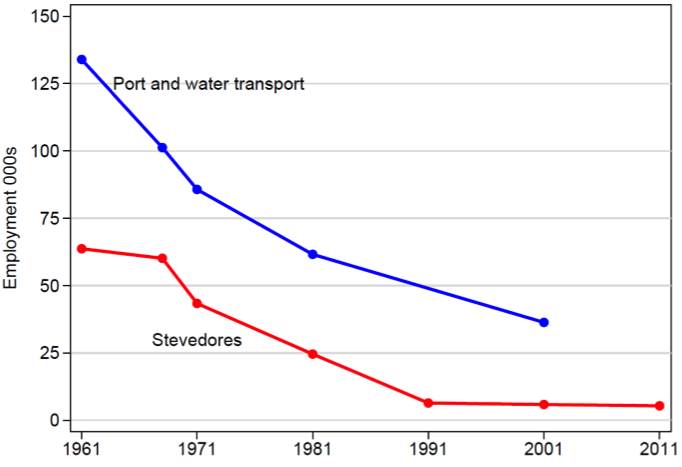 While this preliminary evidence suggests that this technological change had severe consequences for employment in the industry and for stevedores in particular, it does not tell us what actually happened to the workers involved. Did they find work in other occupations or industries? Did they enter long-term unemployment? Or did the industry simply stop hiring new workers and shrink by a process of attrition? In our recent paper, we investigate how dock workers and workers in port-related industries adjusted to this technological change in both the short and the long run.

We first identified major ports in England and Wales in 1967 and the local authorities where they were located (Scottish ports were excluded from the study). We then measured employment and unemployment in each local authority district of England and Wales and showed that districts which contained major ports in 1971 did worse than districts which did not contain ports in the years following containerisation.

We then considered how individual workers in these districts fared. Perhaps employment fell in port districts because individuals moved to new jobs in other (non-port) areas. To answer this question, we followed a sample of workers from 1971 until 2011 and compared the labour market outcomes of dock workers with similar workers in other occupations and industries. To do this, we matched individuals across carefully defined treatment and control groups according to pre-selected characteristics such as age, marital status, and skill level.

We defined three mutually exclusive treatment and control groups based on occupation (being a stevedore or not), industry (port vs. non-port and non-transport industries), and location (port vs. non-port districts). For example, in order to have a meaningful comparison group for stevedores, one has to choose a pool of workers who are comparable to the stevedores in the nature of their work but who were somewhat insulated from the technological change. After we define the treatment and control groups, we compare employment, unemployment, inactivity and death rates at 10-year intervals. The data comes from The Office for National Statistics (ONS) Longitudinal Study (LS) which follows a sample of approximately 1 per cent of the total population in England and Wales over a period of 40 years (1971-2011).

We find that subsequent differences in labour market outcomes are in fact rather small, insignificantly different from zero and even in some cases positive. Positive differences are most notable in 1981, at which point stevedores were protected from redundancy by the National Dock Labour Scheme (NDLS). For example, we find that stevedores were more likely to be employed in 1981 compared to their matched counterparts. The NDLS was abolished by the Thatcher Tory government in 1989. But even after employment protection was removed, there weren’t large differences in labour market outcomes between dock workers and similar unskilled men who were not dock workers. In fact, we find that stevedores were more likely to keep their occupation in 1991 following the abolishment of the NDLS than workers in the control group.

This result should be interpreted in the light of the unique industrial relations policies which existed for this particular group of workers at the time of the introduction of containers. Dock workers were insulated from redundancy for almost 20 years. This had consequences for the development of new ports in the UK, such that port activity shifted and concentrated in entirely new locations. It should also be recognised that the comparison group (unskilled men who were not dock-workers) experienced very poor labour market outcomes from the 1970s onwards, and so we conclude that rather than doing “well”, dock workers did “no worse” than unskilled men in general. 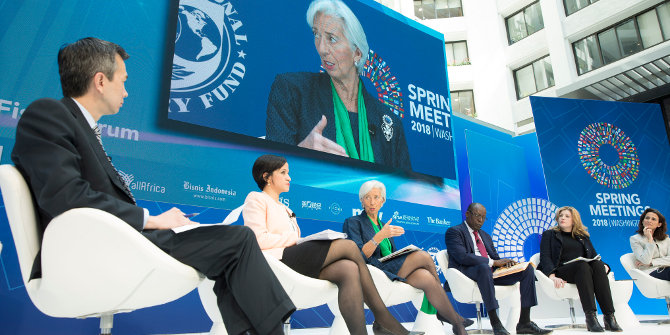