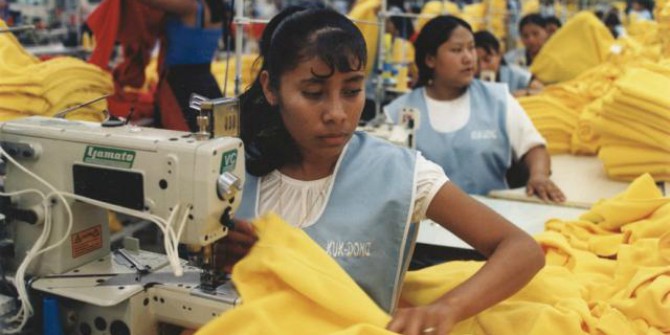 The problem is not merely episodic: it is systemic. While the tipping point came from the testimony of a number of high-profile women in the media and show business, the shock waves of the #MeToo movement make it clear that sexual harassment is pervasive in every industry and in every country. Accusations have now engulfed political establishments, churches and educational institutions (here, here and here).

More encouraging evidence comes from the Better Work programme, a partnership between the ILO and the International Finance Corporation, which brings together governments, global brands, factory owners, and unions and workers to improve working conditions and competitiveness in the garment industry, which is currently active in seven countries. A rigorous assessment of the program conducted by researchers at Tufts University found that Better Work decreased sexual harassment concerns in most countries where it was active, with the dominant trend one of improvement over time.

Sarah Ashwin is professor of comparative employment relations at LSE’s Department of Management. She is currently researching the governance of global supply chains in the garment industry. Her previous research includes projects on workers’ responses to economic reform in Russia, gender and employment and the gender division of domestic labour in Russia. Professor Ashwin is on the Advisory Board of the British Journal of Industrial Relations..

Naila Kabeer is professor of gender and development at LSE’s Department of Gender Studies and Department of International Development. Her research interests include gender, poverty, social exclusion, labour markets and livelihoods, social protection and citizenship and much of her research is focused on South and South East Asia. Naila is currently involved in ERSC-DIFD Funded Research Projects on Gender and Labour Market dynamics in Bangladesh and India.