Compared with scientists, economists tweet and engage less with others, and use more complex words and a distant tone, writes Marina Della Giusta 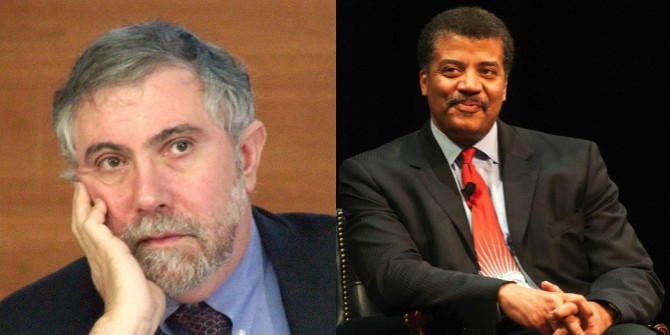 It has become increasingly common for academics to use social media to communicate with wider audiences. Twitter, like many other social platforms, typically measures success in terms of numbers of followers, likes and re-tweets, but this only tells us something about the spreading of messages but not necessarily whether the content of the messages is understood or embraced. One way to ascertain this it through network and language analysis, which used together can tell us how effective the communication is.

This is what appeared in April 2017 when we gathered data on tens of thousands of tweets from the Twitter accounts of both the top 25 economists and 25 scientists as identified by IDEAS and Sciencemag, including the top three economists at the time, Paul Krugman, Joseph Stiglitz and Erik Brynjolfsson and, on the other side, the top three scientists Neil deGrasse Tyson, Brian Cox and Richard Dawkins. At that time those accounts covered roughly two thirds of all the following.

The timing is significant because 2016 has been declared the year of post-truth politics, the year in which appeals to emotions (pathos) superseded the significance of factual evidence-based information (logos), affecting people’s constructions and interpretations of events. This has been accompanied by the growing prominence of political ‘alt’ movements (e.g. UKIP, Alt Right) and their aggressive, provocative and populist narratives, and ‘fake news’ leading to political shock events such as Brexit and the Trump election.

We selected scientists specifically to understand whether economists engage less or less effectively than experts in fields characterised by a high degree of specialism and complexity, an often-heard justification for the poor understanding of what economists do by the public. We collected 64 121 tweets from the economists and 63 472 from the scientists, selecting the last 3 240 tweets from each person on the list (economists’ tweets ranged from 02/11/2009 to 06/04/2017, the scientists’ tweets from 09/12/2008 to 13/04/2017).

In terms of composition of both the sample and the ensuing networks, our study sadly confirms what we already know about lack of diversity in the profession. The language analysis of differences in register (a higher register is generally less accessible and thus more distanced) finds that economists use a higher number of complex words, specific names and abbreviations than scientists.

Furthermore, differences in pronoun use (which relate to a greater degree of involvement with the reader) show that highly inclusive pronouns such as ‘we’ and ‘our’ are used up to twice as often by scientists when compared to economists. This lends support to the ‘superiority of economists’ argument presented by Fourcade, Ollion and Algan, who link higher assertiveness and sense of superiority displayed by economists to higher remuneration, insularity and hierarchy than in the other social sciences.

This we believe feeds into both poor understanding and traction of economics with the general public, and continuing trends in (lack of) diversity, that are related to both implicit attitudes and institutional practices and are currently the focus of several initiatives at the Royal Economic Society, the European Economic Association and the American Economic Association.

The lesson for the profession is clear: when communicating with the public we need to change our approach. Stop talking AT others, but talk TO others and care about being understood. This chimes with advice recently offered by Chris Dillow who suggests remembering that people’s beliefs cannot easily be challenged when they are related to their own identity (e.g. in the case of EU membership); that nobody should be talked down to; and finally and importantly that we should stick to facts and always be honest about the things we can and cannot research and the limitation of our own findings.