Cryptocurrencies: the future of money, speculative bubble or something else?

Cryptocurrencies: the future of money, speculative bubble or something else? 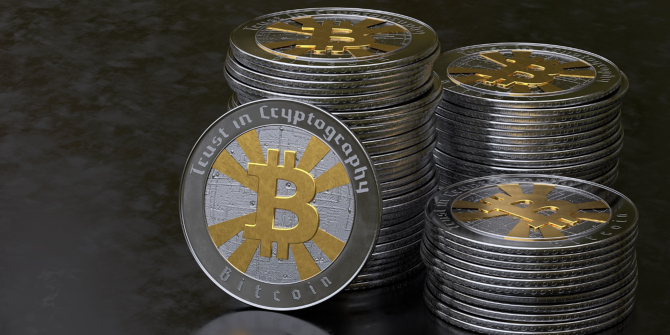 This month’s episode of the LSE IQ podcast investigates whether cryptocurrencies are the future of money, a speculative bubble that will burst, or something else.

In 2008 a person or group going under the pseudonym ‘Satoshi Nakamoto’ published a white paper setting out the fundamentals of a peer-to-peer electronic cash system called bitcoin. This would do away with the need to rely on financial institutions, acting as trusted third parties, to process electronic payments. Instead money could be sent directly from one party to another.

Transactions would be verified and recorded permanently on the blockchain. This digital ledger would be distributed across a large network of computers and guard against a risk specific to digital currency — that it can be fraudulently spent twice. Technology, Satoshi Nakamoto claimed, would replace the need for trust.

Bitcoin was the first decentralised cryptocurrency, and hundreds of others have been created since.

Tatiana Cutts is an assistant professor at LSE’s department of law. She joined the department as an assistant professor from the University of Birmingham in 2016. Prior to that she was a senior lecturer at Keble College, and received her D.Phil from the University of Oxford in 2015. Her research interest spans several areas of private law, primarily within the context of modern monetary practices. Tatiana is also involved in various policy-facing projects concerning the integration and regulation of Bitcoin, amongst other applications of distributed ledger technology.

Nigel Dodd is professor in the sociology department at LSE. He obtained his PhD from the University of Cambridge in 1991 on the topic of Money in Social Theory, and lectured at the University of Liverpool before joining the LSE in 1995. Nigel’s main interests are in the sociology of money, economic sociology and classical and contemporary social thought. He is author of The Sociology of Money and Social Theory and Modernity (both published by Polity Press). His most recent book, The Social Life of Money, was published by Princeton University Press in September 2014. editor-in-chief of the British Journal of Sociology and is a member of the editorial boards of Economy and Society and the Journal of Classical Sociology.

Garrick HIleman is head of research at Blockchain, co-founder of Mosaic, and research associate at the University of Cambridge and LSE. He is best known for his research on monetary and distributed systems innovation, particularly cryptocurrencies and distributed ledger technology (blockchain). Garrick was recently ranked as one of the 100 most influential economists in the UK & Ireland. He is regularly invited to share his research and perspective with public sector institutions. Notable cryptocurrency and blockchain research publications include the “2017 Global Cryptocurrency Benchmarking Study” (University of Cambridge) and the “2017 Global Blockchain Benchmarking Study” (University of Cambridge). He also created and published the CoinDesk “State of Bitcoin” and “State of Blockchain” reports from 2013-2016. Garrick’s other research interests include sovereign debt, financial crises, financial repression and prudential regulation, black markets, and systemic risk. He completed his PhD in economic history at LSE under the supervision of professors Albrecht Ritschl and Niall Ferguson.

Natacha Postel-Vinay is assistant professor at LSE’s department of economic history. , soon-to-be Assistant Professor in Economic History at the LSE. She is an economic and financial historian, and won in 2012 the Economic History Society New Researcher Prize. Her research explores monetary and banking phenomena, whether domestic or international. She looks at how finance affects the business cycle, in particular in contributing to economic crises and worsening downturns. She has special expertise in the financial history of the Great Depression, in particular the causes of  US bank failures in the 1930s. She often deals with issues of mortgage and household debt. She also has an interest in public finance, fiscal capacity, and the question of the impact of fiscal austerity on the economy.

Sue Windebank is co-host and co-producer of the LSE IQ podcast and a senior media relations officer at LSE. She has also worked in science communication and environmental campaigning.