Proximity to a large plant plays an important role in the diffusion of knowledge and patent production, write Vincenzo Scrutinio, Christian Fons-Rosen and Katalin Szemeredi 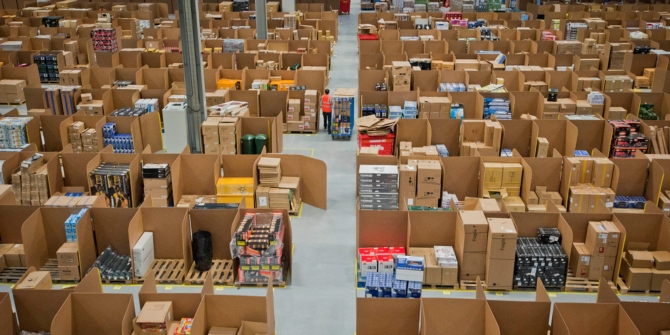 Cross-country investment flows are a peculiar trait of the modern economy and have been progressively increasing in the last two decades. Even with a substantial decline after the Great Recession, there were 2.86 trillion of dollars net flows in 2016, according to data published by the World Bank. There has been an intense debate on the effects of this investment on host locations and there is still no consensus on the overall effects. Among the factors on host locations that should be influenced by these investments, technology transfer and innovation play a central role, as both are crucial for economic growth.

Proximity to the source of innovation, or plants that actually use technologies, can potentially provide large gains for local firms. Knowledge is generally hard to appropriate and the direct contact plays an important role in knowledge diffusion. Some studies have found that geographic proximity is important for knowledge flows as it helps to connect inventors.

In our recent work, we exploit 49 openings of large plants between 1983 and 1992 in the US to assess whether proximity with a large company promotes technology diffusion and local innovation in the host county. To this purpose, we compare patents by local inventors and citations made – the so called “paper trail of knowledge flow” – to the entering firm patents in counties where the firm decided to locate (“Winning”) and in counties which the firm considered for the new plant but did not choose at the final stage of the decision process (“Losing”).

This strategy, initially developed by Michael Greenstone, Richard Hornbeck and Enrico Moretti allows one to compare counties that the firm itself considered to be similar and are less likely to differ substantially. They are indeed similar in terms of previous patent per capita, inventors per inhabitants and characteristics of inventors. To provide a practical example, Amazon’s search for a new headquarters location sees many similar cities competing against each other.

The proximity to firms plays an important role in the knowledge of the stock of patents of the entering firm. Our results, reported in Figure 1, show that a patent by the entering firm receives 0.0019 more citations per year in the winning county with respect to the losing counties. This effect, while small in magnitude, represents a sizeable relative increase in the citation probability, about 86 per cent on average per year. This increase is particularly strong for recent patents which are closer to the most recent technology development in the industry and are less likely to be already known by local inventors.

But not all entering firms are the same: patents from IT firms are more likely to see an increase of citations received rather than patents from manufacturing companies. This kind of patent is indeed more general, that is to say, it is more likely to be cited by patents in other technology classes, and they are easier to be used in other production processes. The increase in citations is stronger when the plant actually opens, but no effect is found if the project is abandoned. This confirms that the direct interaction between the entering firm and other local firms, whether through the movement of employees or demand-supply relationships, is of paramount importance. The data available do not allow, unfortunately, to exactly isolate which of these channels is stronger.

Figure 1. Firm entry decision and increase in the number of citations to patents by entering firm 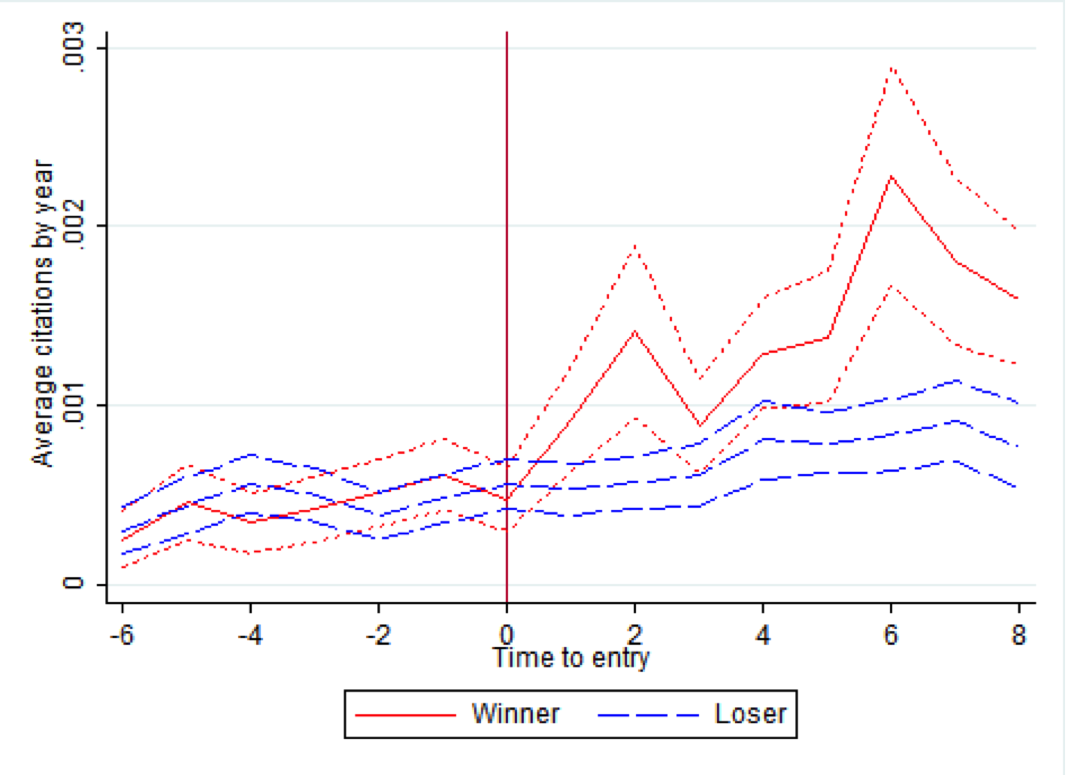 This direct reference to the technology of the entering firm is surely important as it testifies that the entry indeed helps to disseminate the specific technological capital of the firm. Having said that, it is also crucial to understand whether this translates into the autonomous production of new ideas and technology. We look at inventors already present in the county at the time of entry and assess whether the firm entry leads to an increase in the number and quality of patents produced.

Our estimates show that these inventors not only start citing more patents of the entering firm (both new and old) but also increase by 3 per cent annually the number of patents produced with respect to similar inventors in losing counties. These inventors also widen their network by increasing the number of co-authors. Not all firms, however, promote local innovation to the same extent. As Figure 2 shows, the estimated effect is strongly heterogeneous across cases and in a few instances, the overall effect turns even negative. The innovation activity of the entering firm plays a crucial role in this perspective as the effects are larger for the entry of firms with a strong innovation propensity.

Figure 2. Effects of entry on patent production by year by local inventors 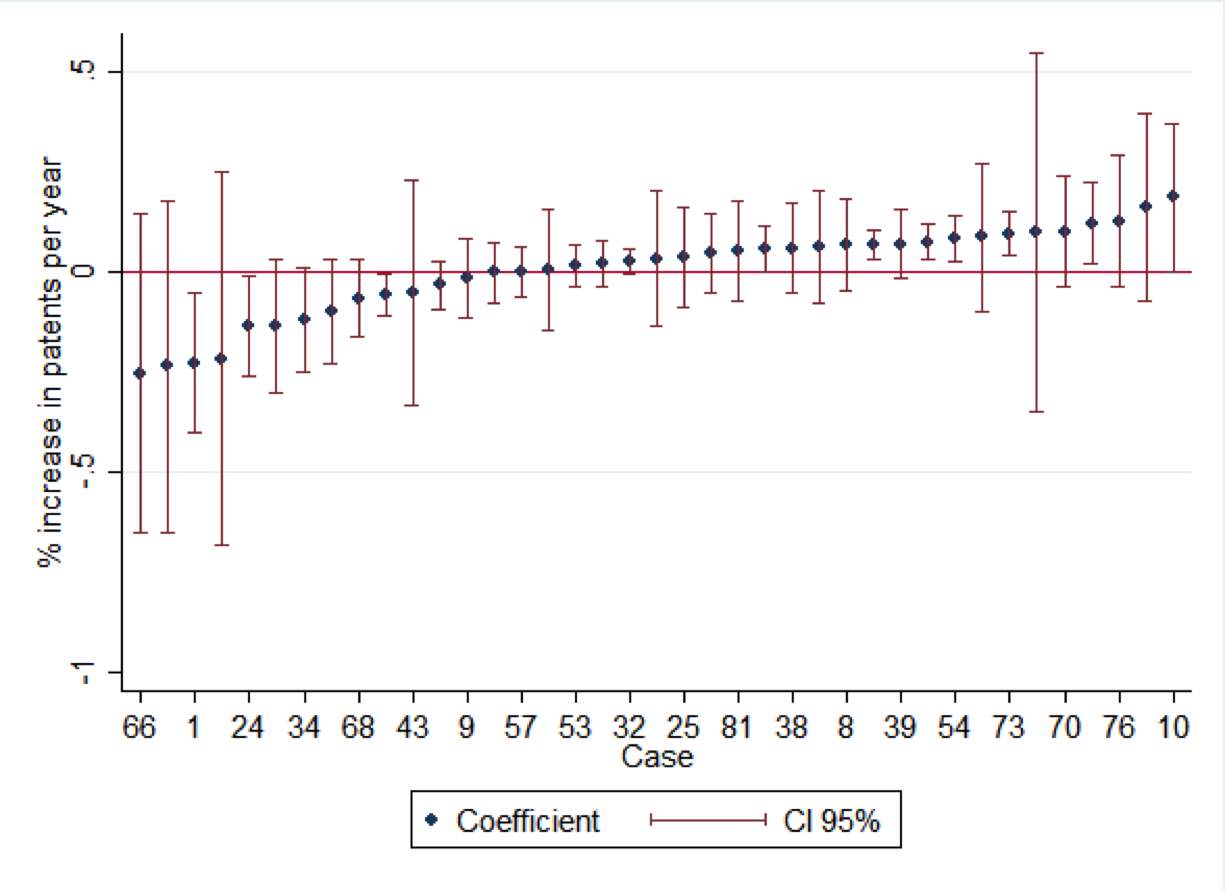 Our (preliminary) estimates show that proximity plays an important role in the diffusion of knowledge and that the entry of large companies can have relevant effects on local innovation and patent production. These results have implications from a policy perspective. It is, indeed, common practice to offer incentives to attract firms locations to promote local development and growth as noted by a recent post on this same blog by Koen De Backer. The cost of these policies could be partly compensated by future higher tax income generated by the higher level of innovation. This is in line with – and partially contributes to explain – the results by Greenstone and co-authors (2010) who find that the entry of large firms leads to productivity improvements. At the same time, not all firms are equal and policy makers should carefully consider both the technological characteristics of the entering and of the location considered to assess the extent of possible advantages and interactions. A word of caution is, finally, in order: our results are based on entry decisions up to the early 90’s. The great development in information technology and communications might have made some of the current mechanism less relevant over time and it will be important for future research to asses if the strength of our results are confirmed with more recent data.

Vincenzo Scrutinio is a PhD candidate in economics at LSE and a research assistant at the Centre of Economic Performance. His research interests are applied econometrics, demography and labour economics. He obtained his Bachelor’s and Master’s with distinction at Bocconi University. He worked at the European Commission (ECFIN) and as a research assistant at Bocconi University. He contributes to several Italian websites such as Lavoce.info and Neodemos.it.

Christian Fons-Rosen is an associate professor in the department of economics and business at the Universitat Pompeu Fabra, an affiliated professor at the Barcelona Graduate School of Economics (GSE), and a research affiliate at the Centre for Economic Policy Research (CEPR).

Katalin Szemeredi is an associate professor at Corvinus University of Budapest and a research officer at LSE. Her research focuses on applied microeconomics; innovation; business strategy; economics of organisations; international economics; and labour economics.