The neglected fact of diversity research: religious identity in the workplace

The neglected fact of diversity research: religious identity in the workplace 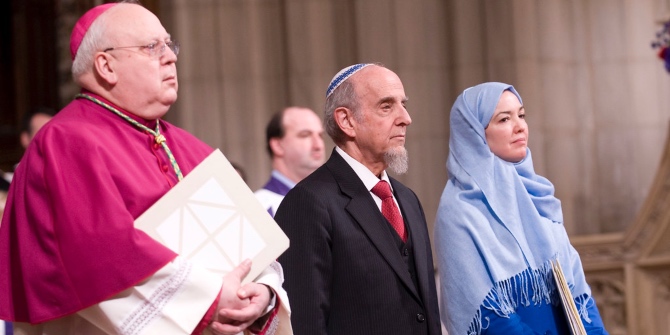 Some years ago, we started to wonder when (or when not), how and why (or why not) employees are expressing their religious identity at work.

This interest was driven by some highly visible cases were employees’ religious beliefs were in conflict with work. For example, two Catholic midwives sought to avoid supervising abortion procedures, a case that reached the UK Supreme Court, which ruled against them. In another case the European Court of Justice ruled that workplace bans on wearing hijabs does not necessarily constitute discrimination. They highlighted that religious identity and the expression of this identity can have a profound impact on work decisions and behaviour and can be a source of conflict.

Yet, when we asked our question, we realised that the intersection of religion and the workplace is not widely studied in either human resource or organisational research. Thus in our recent publication, we seek to advance this research by analysing this neglected fact of diversity research, religious identity in the workplace. In a systematic literature review we undertook a methodical examination of the existing literature to synthesise available evidence on the positive, negative and neutral impact that religious identity can have on workplace decision.

To engage with religious diversity in an open, concerted way entails an organisational climate of inclusion that is value-expressing, not value-free, and that can consider the extent to which common religious values align or can be aligned with organisational values. These ideas are in line with what Hicks (2003) calls respectful pluralism at work. Respectful pluralism means resisting favouring one religion while accepting the right to religious expression in the workplace. Importantly, it advocates that religious expression co-occurs with respect for the dignity of all organisational members, whether they have religious values or not. Respectful pluralism is grounded in a climate of psychological safety in an organisation (Nembhard & Edmondson, 2006). Such a climate is characterised by a shared commitment to mutual respect and individual dignity (Roberge & van Dick, 2010). For individuals to feel psychologically safe means feeling free to express elements of themselves without fear of adverse implications.

Responses by religious employees to situations that challenge their personal values form the basis of the media stories we mentioned previously. These (and other) events can raise issues related to an organisation’s mission and authority as well as the rights and dignity of individuals, as employees, clients or customers. Indeed, a person need not be religious in order to face conflicts with her personal values at work. Research demonstrates that employees frequently craft their work in order to act in ways that are consistent with personal values. Findings from our systematic review suggest that religious employees do the same, by augmenting the way they do their work to contribute in a fashion that reflects their religious identity.

Respectful pluralism, while promoting reasonable accommodation to religious expression (e.g., allowing an individual to absent themselves from certain actions or services), necessitates attention to the concerns and interests of the organisation and its mission as well, such as respectful interactions with the public. We suggest that the human resources division gather information regarding the kinds of client services and encounters that raise potential value conflicts and the ways that employees currently respond to these conflicts. Such conflicts provide the basis for discussion, feedback, and redesign of work processes. In instances where conflicts are not readily resolved, procedures can be developed through staff input and experimentation to ensure that the organisation’s responsibilities to the public are fulfilled should a religious employee raise an objection. The key idea is to get the issues of value conflict and congruence into the collective organisational conversation. Organisational members with diverse backgrounds are important sources of insight into how to address value conflicts in a mission-appropriate fashion. Periodic attention to such events and potential conflicts provides an opportunity to reflect on ways in which personal values can be expressed while fulfilling the organisation’s mission.

Ilka Gleibs is an assistant professor in social and organisational psychology in the department of psychological and behavioural science at LSE. Her main research focus is on understanding the consequences of multiple social identities, changes in (of) social identities and well-being and on a social identity perspective on leadership.

Adrian Coyle is a professor of psychology at Kingston University, London. He is a social psychologist whose research and publications have principally addressed psychological issues in identity, religion and society, loss and bereavement, and sexualities. Much of this work has been framed in terms of social psychological approaches, theories and concepts.

Denise M. Rousseau is the H.J. Heinz II university professor of organisational behaviour and public policy at Carnegie Mellon University’s Heinz College of Information Systems and Public Policy and the Tepper School of Business. She is the faculty director of the Institute for Social Enterprise and Innovation and chair of the health care policy and management programme. Dr. Rousseau was the 2004-2005 president of the Academy of Management.

Céline Rojon is a psychologist and consultant for ITB Consulting in Bonn, Germany. She received her PhD from the University of Surrey.