In the long run the moral case of a global universal basic income may become overwhelming, write Lukas Schlogl and Andy Sumner 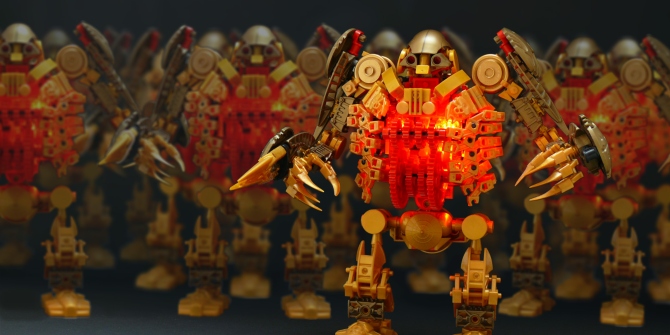 Stunning technological advances in robotics and artificial intelligence are being reported virtually on a daily basis: from the versatile mobile robots in agriculture and manufacturing jeans to autonomous vehicles and 3D-printed buildings.

In fact, the International Federation of Robotics estimates that next year the stock of industrial robots will grow by more than 250,000 units per year concentrated in production of cars, electronics, and new machinery.

In some domains, emerging economies are actually ahead of richer countries. Take for example, Beijing’s driverless subway line or mobile phone-based finance in Kenya. Robots could even partially replace researchers and academics. So, this is really, really quite serious now…

This year’s World Development Report focuses on the changing nature of work (although its messages feel oddly dated). And it’s not the only one. A broad range of international agencies have recently flagged such issues relating to the future of employment in the context of automation, including ADB, the ILO, the IMF, UNCTAD, UNDP, UNIDO, and the World Bank again, and again. Ditto the private sector folks at McKinsey Global Institute, the World Economic Forum, and Pricewaterhouse. In fact, the International Labour Organization (ILO) has gone as far as launching a Global Commission on the Future of Work.

So, why does it matter?

What does automation mean for developing countries? Are the East Asian pathways to development based on job-creating manufacturing-led growth gone forever? Will 1.8bn or two-thirds of the workers in developing countries need to find new jobs (as the World Bank says they will)? Is a global universal basic income needed as Indonesian Minister of Finance proposed at the IMF and World Bank meetings? Does every developing country need to set up a ministry of automation as Thailand has done?

In a new paper we take a closer look at what we call the rise of the robot reserve army (and here’s the podcast at LSE) and what it means for the future of economic development and employment in particular in developing countries. It’s all part of a new project on structural transformation and inclusive growth that studies what we’ve called the “developer’s dilemma.”

“What’s the developer’s dilemma?” we hear you cry (we can dream). It’s this: structural transformation, aka genuine economic development (not just commodity fuelled growth), often leads to rising inequality unless public policy intervenes. At the same time inclusive growth is more likely with steady or even falling inequality.

In the years ahead big issues such as automation, but also deindustrialization are important mega-trends. And it’s important not to forget the historical experience of economic development, which points towards the case for “trickle along” economics.

That said, interest in the impact of technological change is of course by no means new. There’s the detailed empirical study of Leontief and Duchin from the 1980s and, going further back, the work of W. Arthur Lewis, Marx, Ricardo, and Schumpeter.

So, what did we find?

Continuing the Simpsons and the robots theme, we have three headlines (why is it always three?):

1. D’oh! Automation is not just a rich country issue

The bulk of thinking on the economic implications has so far focused on advanced industrialised economies where the cost of labour is high and manufacturing shows a high degree of mechanisation and productivity. Yet, the developing world is both affected by automation trends in high-income countries and is itself catching up in terms of automation.

2. Duh! Automation is not only about technology

The current debate focuses too much on technological capabilities, and not enough on the economic, political, legal, and social factors that will profoundly shape the way automation affects employment. Questions like profitability, labour regulations, unionisation, and corporate-social expectations will be at least as important as technical constraints in determining which jobs get automated, especially in developing countries.

In contrast to a widespread narrative of “technological unemployment” (©John Maynard Keynes), a more likely impact in the short-to-medium term at least is slow real-wage growth in low- and medium-skilled jobs as workers face competition from automation. This will itself hinder poverty reduction and likely put upward pressure on national inequality, weakening the poverty-reducing power of growth, potentially placing social contracts under strain.

As agricultural and manufacturing jobs are automated, workers will continue to flood into the service sector, driving down wages, leading to a bloating of service-sector employment and wage stagnation but not to mass unemployment, at least in the short-to-medium term.

Given the pace of technological change, upskilling strategies are unlikely to be a panacea. Safety nets and wage subsidies may be desirable, but the question remains how to finance them (without making labour more costly and thus exacerbating a trend towards replacement). Investing in labour-heavy sectors such as infrastructure construction, tourism, social services, education or healthcare provision may be a way for developing countries to manage disruptive impacts of automation though these would imply major public investments and do not in themselves constitute a long run strategy for economic development. In the longer run the moral case of a GUBI (global universal basic income—remember, you heard the acronym here first) may become overwhelming.

So those are the headlines. For the real nerds, we’ll blog in more detail on drivers of automation; our theory on the effect of automation in developing countries; the forecasts of automatability and employment displacement; and different approaches to public policy responses.

And here’s Homer, showing how not to do it.

Lukas Schlogl is research associate with the ESRC GPID Research Network at King’s College London. He works on structural change, digital transformation, and political behaviour in developing countries. His research is at the intersection of political science, development economics and digital social science. @LukasSchlogl

Andy Sumner is a reader in international development in the department of international development at King’s College London and a visiting fellow at the Center for Global Development. His research is at the interface of development studies and development economics. His research interests focus on the distributional and welfare dynamics of late economic development in developing countries and Southeast Asia in particular, notably Indonesia, Malaysia, and Thailand. In short, how different modes of economic development and structural change have different welfare outcomes. He is director of the Economic and Social Research Council (ESRC) Global Challenges Strategic Research Network on Global Poverty and Inequality Dynamics.