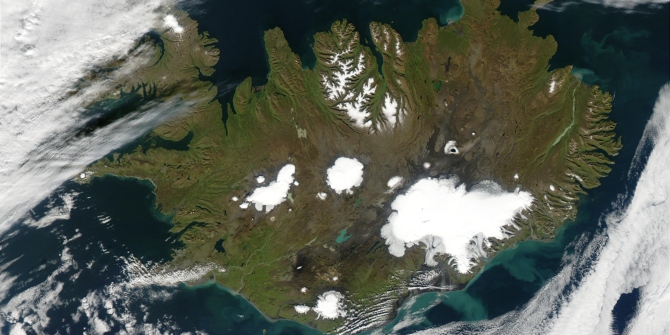 Arctic ice cover has been shrinking as a result of global warming. Besides the important and critical environmental and economic effects of melting ice caps, a side effect is to open the northern sea route for high volume commercial traffic. This shipping route will connect East Asia – Japan, South Korea, Taiwan and China – with North-western Europe through the Arctic Ocean. This route along the Arctic Ocean is shorter than the currently used southern sea route between Europe and Asia through the Suez Canal.

In practical terms, average shipping distances fall by around one third compared with the currently used southern sea route through the Suez Canal. Figure 1 illustrates the shipping distance reductions using the example of the route between Yokohama (Japan) and Rotterdam (Netherlands). This particular route is reduced by 7.200km, while typical shipping routes between South Korea and the Netherlands are reduced on average by 6.300km and between China and the Netherlands by 4.500km. 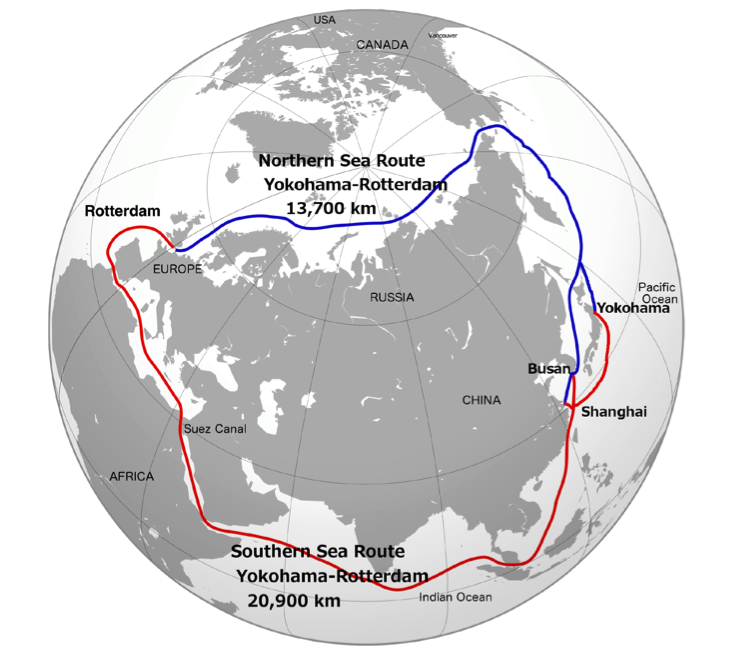 In a new study, we examine how international trade patterns may change as a result of the opening of the northern sea route. The lower shipping times and costs will intensify the trade between East Asia and Europe, but also disrupt the internal trade flows within Europe. In particular, we find a remarkable increase in trade flows between Asia and Europe, diversion of trade within Europe, heavy shipping traffic in the Arctic and a substantial drop in Suez traffic. Projected shifts in trade also imply substantial pressure on an already threatened Arctic ecosystem.

The study uses a computer-based model of the global economy. We have four core findings:

In Figures 2 and 3 the asymmetric trade and GDP results between a selected group of European and Asian countries are shown. East Asian and North-western European countries experience a sharp increase in their bilateral trade. But Southern European countries have very limited trade shifts, while Eastern European countries display trade benefits only if they are closer to the Baltic Sea (e.g. Poland and Czech Republic). These trade effects are translated into permanent gains in GDP and welfare for the countries where trade increases, whereas the welfare effects are close to zero or even negative for countries showing a reduction in their total trade. The United States is barely affected by the intensive use of the northern sea route: its trade with Europe is decreased, but overall US trade and GDP do not change significantly. 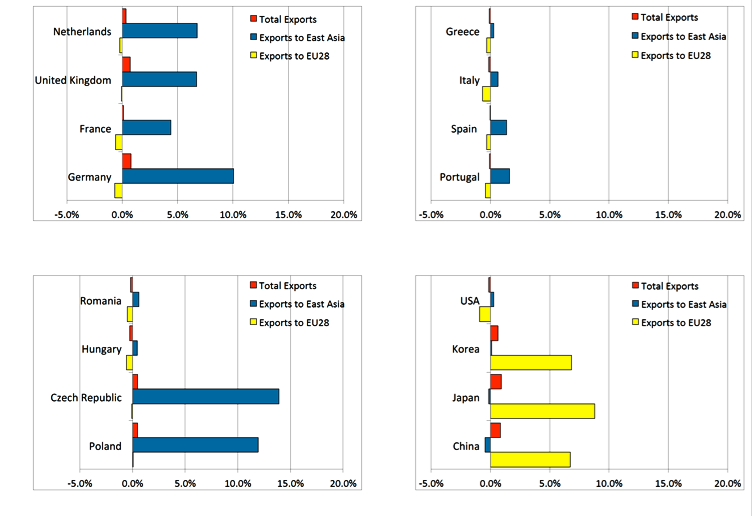 Figure 3. GDP and welfare changes associated with the opening of the NSR for selected countries, in % 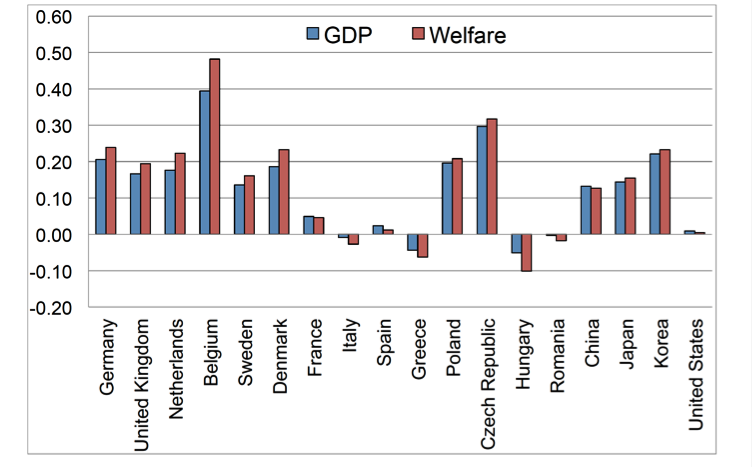 Notes: Welfare is measured as per capita utility. Source: Own estimations using the GTAP database.

We generate scenarios for the year 2030 but this year is tentative, and we find similar effects if use of the northern sea route were to take place later. Follow-up studies project that shipping for small bulk ships will become viable in 2030 and for small container ships in 2050. But projections on climate change are regularly updated and the speed of climate change is highly uncertain. More rapid loss of ice cover would move these effects forward.

The uncertain but progressive use of the northern sea route will also allow industries and production processes to gradually adjust to the trade potential of this new shipping route. In this respect, even when the potential trade and economic disruptions expected from the opening of the northern sea route can be substantial, they can also be anticipated and better assimilated over time.

Eddy Bekkers is a research economist at the World Trade Organization, focusing on quantitative trade modelling. Before that he worked for three years as a Postdoctoral researcher at the WTI primarily on the EU-funded project PRONTO project on nontariff measures. Previously he was assistant professor at the Johannes Kepler University in Linz for six years. Eddy holds a PhD from Erasmus University Rotterdam and a Master’s in economics and econometrics from the University of Amsterdam.

Joseph Francois is managing director and professor of economics at the World Trade Institute. He served as deputy director of the NCCR Trade Regulation from 2015 to 2017. Previously he was professor of economics (with a chair in economic theory) at the Johannes Kepler Universität Linz. He is a fellow of the Centre for Economic Policy Research (London), director of the European Trade Study Group and the Institute for International and Development Economics, senior research fellow with the Vienna Institute for International Economic Studies, and a board member of the Global Trade Analysis Project. He serves on the editorial board of the Review of Development Economics, and the World Trade Review.

Hugo Rojas-Romagosa is a research economist at the CPB Netherlands Bureau of Economic Policy Analysis and a senior research fellow at the World Trade Institute. He has done short term and consultancy projects for the World Bank Group, OECD, UNCTAD, UNDP, Inter-American Development Bank (IADB), ECLAC (Economic Commission for Latin America and the Caribbean), WIIW (Vienna Institute for International Economic Studies) and the INCAE Business School (Costa Rica). He obtained his PhD in economics from the Erasmus University Rotterdam. His research interests include: quantitative trade policy analyses, trade liberalisation and income distribution, globalisation and labour markets, and trade in value-added and global supply chains.