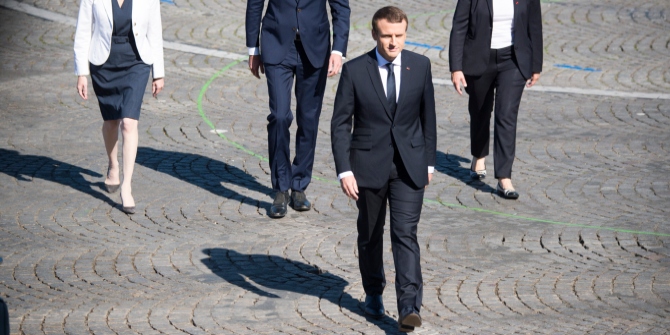 In pursuit of an America First policy, the US withdrew from the Paris Agreement (COP21), with grave economic and ecological consequences and representing a serious backlash for US global leadership in tackling the environmental challenges and issues surrounding climate change. There was no obvious public appetite for the US withdrawal from the Paris Agreement, yet on the positive side, the European Union (EU) and China have responded by announcing that they will strengthen their collaboration and step up their efforts to deal with climate change.

Furthermore, in response to the Lima Call for Climate Action, the EU and its member states have committed to a target of a 40 per cent reduction in domestic greenhouse gas emissions by 2030, compared to the 1990 levels. Perhaps the country showing the most remarkable leadership in response to the US withdrawal is France. President Macron has announced the continuation of credible efforts to tackle this issue. In its efforts to address climate change, with the aim of taking tangible and collective actions, innovating, and supporting one another, France hosted the “One Planet Summit” two years after the Paris agreement.

In order to match ambitions with reality, it is necessary to take into account the crucial factors that cause environmental degradation. Nonetheless, it is also vital to contextualise the economic realities and challenges faced by France, which can have profound implications for its ability to deliver on the promises and plans for dealing with environmental challenges. As it stands, France’s economic growth and overall outlook have been anaemic and bleak since the global financial crisis (GFC), which was followed by the European sovereign debt crisis. The youth unemployment rate remains over 20 per cent and public debt has reached a very high and unsustainable level, in excess of 90 per cent of the annual national income.

Keeping that in context, the French economy needs further and significant structural reforms, which may include the increased liberalisation of the labour market and the regulatory regime, as well as a massive boost of investment. Consequently, France is strongly committed to continue encouraging foreign direct investments (FDI) as a way to create jobs and stimulate economic growth. It is worth noting that although FDI has declined at the global level, France was able to attract a noteworthy amount of FDI in 2017. The flows of FDI to France increased from $28 billion to around $50 billion in 2017 — an increase of 77 per cent, which made France the world’s 9th top country in terms of FDI inflows in that year. Undoubtedly, FDI plays an important role in economic growth and development of an economy, particularly when the indigenous savings are not sufficient to cater to domestic investment needs.

But while FDI is important for economic growth and development, it may also be a cause for concern when considering the ecological consequences of an FDI-led economic growth. In the case of the French economy, the nexus between FDI and environment has profound ecological implications. Unfortunately, the evidence suggests that FDI contributes to the environmental degradation in France by increasing CO2 emissions.

The relationship between economic growth and environmental degradation is also crucial. The successful efforts to increase growth may result in an increase in environmental degradation in the short-term. However, in the long run, there might be an environmental improvement (a phenomenon known as Environmental Kuznets Curve). One may argue that for the sake of long-term economic interest, short-term negative effects might be condoned in policy formulation. But when compared with the ecological realities and commitments (including the Paris Agreement), this line of reasoning is fundamentally flawed.

Specifically, commitments have been made to decrease carbon emissions in the form of nationally determined contributions (NDCs) and the EU and its member states have expressed a “binding target of domestic reductions in greenhouse gas emissions”. Concomitantly, any negative gesture or ecologically unsustainable policy stance, particularly by a country like France, will have detrimental effects on the global efforts to deal with environmental challenges. This implies a choice between economic growth by boosting investment and global ecological leadership from the front, a clear manifestation of the dilemma faced by President Macron!

The GFC revived the debate on the importance of the financial sector for real economy and the notion of financial and economic stabilities as two sides of the same coin. However, it is also important to consider the role financial development plays in environmental degradation. There is an argument that financial development may offer more opportunities to develop the renewable energy sector by providing more funds to innovative firms. This raises the question of whether or not such a notion prevails in the case of France.

Evidence on France suggests that a sustainable financial intermediation can play an important part in dealing with the environmental degradation by facilitating the investments in environmentally more sustainable sectors of the economy. Similarly, in the nexus between environmental degradation and its contributory factors, an important factor to consider is the technological innovations, which can be helpful in switching to more sustainable sources of energy including renewables. Fortunately, in specific to France the evidence suggests that energy research innovations can curtail French carbon emissions and hence leads to the improvement of environmental quality. In a nutshell, research and development in energy innovations are useful in improving environmental quality by lowering carbon emissions.

Undoubtedly, France is standing at an interesting crossroad. On one hand, it is starving for capital investment (specifically FDI), and on the other hand it projects global leadership and commitment to deal with the climate challenges which requires it to be an example for others. It appears that there is a crucial dilemma and tradeoff the French policymakers may face.

So, how to deal with this dilemma and what steps should France take?

These four steps will help France address the environmental challenges and honour its commitments. Indeed France would be leading from the front and by example!

David Roubaud is deputy director general (directeur général adjoint) at Montpellier Business School. He is is a graduate from HEC School of Management and Sciences Po in Paris. Before completing a PhD in Economics & Finance (2011), he worked as a Consultant in Strategy in Russia and prior to that was an associate within the mergers & acquisitions department at Merrill Lynch in New York and London. Previously, he worked as an analyst at Rothschild Bank in Paris. He has been an assistant professor at Groupe Sup de Co Montpellier Business School since April 2011. In September 2013 he was appointed dean of the faculty and joined the executive team of the business school. His topics of research include decision theory under uncertainty, the representation of ambiguity in economic and financial models and the axiomatisation of stochastic processes. The key field of application of his research is the real option theory in corporate finance.