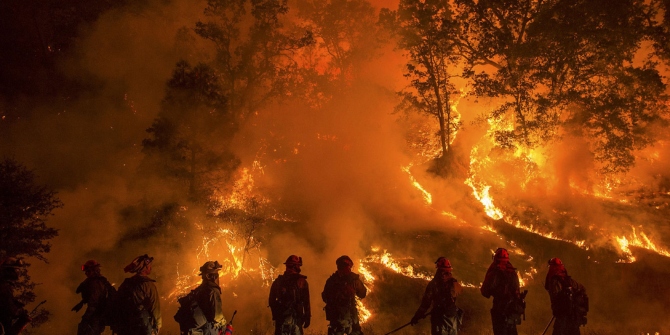 Climate change poses risks to the financial system. Yet our understanding of these risks is still limited. As we explain in a recent paper, central banks and financial regulators could contribute to the development of methodologies and modelling tools for assessing climate-related financial risks. If it becomes clear that these risks are substantial, central banks should consider taking them into account in their operations. Both central banks and financial regulators might also consider supporting a low-carbon transition in a more active way so as to contribute to the reduction of these risks.

What are the climate-related financial risks?

Climate change is likely to increase the severity and frequency of extreme events such as floods, heat waves and hurricanes. These events, combined with the incremental changes in climate, can lead to property damages, lower productivity and severe economic disruptions that could result in financial losses. Such losses could destabilise both the insurance sector and the banking system. These are the so-called physical risks.

But the potential impact of climate change on financial stability moves beyond the physical risks. The transition to a low-carbon economy itself might potentially cause severe disruptions and losses for the companies with business models that rely directly or indirectly on fossil fuels. And this could harm not only the banks that have provided loans to these companies, but also the financial investors that have bought stocks and bonds issued by them. A tightening of energy efficiency standards could also affect broader financial exposures, including mortgage lending. These are the so-called transition risks.

Both the physical and the transition risks are potentially significant for the financial sector. And the financial losses that they might cause could be substantially exacerbated because of the highly interconnected global financial system.

Assessing climate risks: what are the challenges?

Central banks have already started investigating the implications of climate change for financial stability. For example, the Bank of England has reviewed the exposure of the UK insurance sector to climate-related financial risks and is conducting a similar review for the banking sector. De Nederlandsche Bank (DNB) has recently explored the exposure of the Dutch financial system to the carbon-intensive sectors and the potential losses from climate-related events. Climate-related financial risks have also been recently investigated in the academic literature via climate stress-testing methods or macroeconomic modelling.

But the analysis of these risks is still at a preliminary level and the challenges for researchers are significant. First, the data that are necessary to analyse the exposure of the financial system to climate risks are not always available or sufficiently detailed. Second, defining which assets are exposed to climate risks is not a trivial task and can lead to different conclusions about the importance and the implications of climate risks. Third, an evaluation of climate-related financial risks requires the modelling of dynamic interactions between the macroeconomy, the financial system, climate change and environmental policies. For example, expectation of tighter future climate policies could lead to sharp shifts in investment and asset prices across sectors, potentially triggering sharp increases in the default rate and falls in asset values in high carbon sectors. Conventional macroeconomic models cannot easily capture these issues and new approaches to macroeconomic modelling might be needed to assess such risks.

What can central banks and financial regulators contribute to help overcome these challenges? They could contribute to the development of databases, taxonomies and methodologies that would enable the analysis of the exposure of the financial sectors to climate risks in a consistent and comparable way. Steps have already been taken in this direction: for example, the Financial Stability Board has established the Task Force on Climate-related Financial Disclosures which has made sector-specific recommendations on how companies could voluntarily disclose climate-related financial risks. However, firms in all industries, including financial firms, will need to do further work to make such disclosures comprehensive, meaningful and comparable.

What if climate risks are substantial?

If further research makes it clear that climate-related financial risks are substantial, central banks should consider taking them into account in their operations. For example, they could apply climate-related risk criteria to manage the assets on their own balance sheets. This would be similar to what some central banks, like DNB and the Banque de France, already do when they use environmental, societal and governance (ESG) criteria for their own investments. Moreover, climate-related financial risks, if deemed material, could be reflected in the collateral frameworks and the asset purchase programmes of central banks.

But could central banks address climate risks in a more active way? Here a distinction can be made between the central banks of high-income countries and the central banks of emerging and developing countries. In the latter countries, central bank mandates are broader and in many cases strongly linked with governments’ development objectives. Some of these central banks have already used tools with the explicit aim of promoting green sectors. For example, the Bangladesh Bank has introduced a credit quota according to which at least 5 per cent of bank loans should be directed to these sectors.

In high-income countries the central banks mandates are more narrowly defined – or interpreted – and do not refer explicitly to environmental issues. But both central banks and financial regulators in these countries could consider supporting a smooth transition of the financial system in a more active way so as to enhance the resilience of the financial system. That would be in line with their financial stability objectives. Indeed, eight central banks and financial regulators, including the Bank of England and the DNB, have recently co-developed the Network for Greening the Financial System (NGFS) which seeks to contribute to the development of environment and climate risk management in the financial sector, and to mobilise mainstream finance to support the transition toward a sustainable economy. The NGFS has since expanded to include seventeen members and five observers. These initiatives need to be intensified.

It has also been proposed that central banks and financial regulators in high-income countries could consider supporting green finance directly by using their own tools. For example, the EU High-Level Expert Group on Sustainable Finance has recently suggested that green differentiated capital requirements could be considered. This would mean that banks could be allowed to fund ‘green’ loans to projects which are likely to reduce long-term environmental risks with less capital.

Alternatively, they could be required to fund ‘brown’ loans to projects which are deemed to exacerbate these risks with more capital. The second proposal is more likely to be preferred by central banks and financial regulators as relaxing prudential regulations just to encourage ‘green’ lending could jeopardise the safety and soundness of financial institutions. That said, the case for increasing capital requirements to ‘brown’ sectors would still need careful evaluation. Important considerations include whether risks created by such lending can be meaningfully quantified and whether such a policy can be designed to avoid penalising carbon-intensive borrowers that are trying to shift towards more sustainable business models.

Climate change as a key financial challenge for the 21st century

Over the next decades, climate change is likely to transform our economies in a fundamental way. Elected governments are primarily responsible for managing the transition to a low-carbon economy. Yet central banks and financial regulators cannot ignore the potentially serious risks that climate change poses to the financial system. Understanding and addressing these risks is a major task and more research in this area is necessary to inform policy development in all areas, including financial policy, to support a smooth but timely transition.

Emanuele Campiglio is assistant professor at the Vienna University of Economics and Business (WU) and a visiting fellow at LSE’s Grantham Research Institute on Climate Change and the Environment.. He is also currently leading the ‘Green Macro’ work package of the Mistra Financial Systems programme. His most recent work focuses on macroeconomic modelling and sustainable finance.

Pierre Monnin is a fellow with the Council on Economic Policies, where he is focusing on the environmental and social effects of monetary policy. Prior to that was with the Swiss National Bank (SNB) in various roles for a total of ten years – counselling SNB’s board members on issues concerning financial markets and monetary policy as well as developing measures of financial stability and integrating them into the bank’s monetary policy framework. He also worked at Man Investments as a quantitative analyst, developing asset allocation strategies for alternative investments. Pierre holds a PhD in economics from the University of Zurich, a MSc in economics from Queen Mary, University of London, as well as a MSc in statistics and a BA in economics from the University of Neuchatel.

Josh Ryan-Collins is head of research at UCL’s Institute for Innovation and Public Purpose (IIPP), working on the the economics of innovation, inclusive growth, economic rent in modern economies and measuring public value. Before joining IIPP, he was senior economist at the New Economics Foundation (NEF), one of the UK’s leading think tanks. There he led a research program focused on money, credit, banking and the macroeconomics of land and housing. Josh has written two co-authored books: ‘Where Does Money Come From?’ (2011, NEF), a best-selling guide to the UK monetary system which is used as a textbook to teach economics in the UK and U.S.; and ‘Rethinking the Economics of Land and Housing’ (2017, Zed books) which featured in the Financial Times’s economics editor Martin Wolf’s top summer reads of 2017.

Guido Schotten is an economic policy advisor for the Dutch Central Bank (DNB) who specialises in climate change, energy policies and global imbalances/current accounts. He is the author of DNB’s occasional study “Time for Transition” and DNB’s position paper “Bottlenecks in Green Finance”. His work mostly focuses on the effects of carbon pricing on competitiveness, the relationship between climate policies and economic growth, stranded assets and the role of the financial sector in the energy transition. He has a master’s in economics and a master’s in history, both at the University of Amsterdam, where he has also worked as a lecturer in international economic relations.