The politics of media literacy risks blaming people for the problems they face in the digital environment, writes Sonia Livingstone 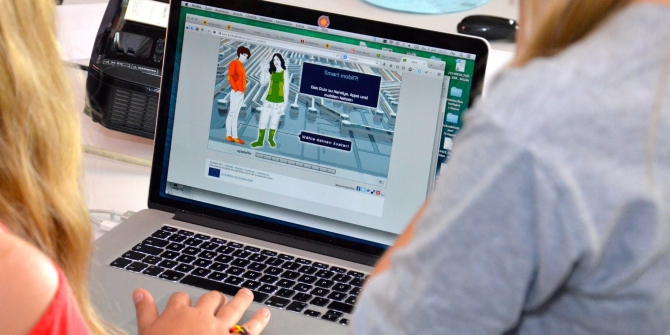 Last time I wrote about media literacy, I was glad to observe that, as the media increasingly mediate everything in society, there is growing emphasis on the importance of ensuring that people have the media literacy not only to engage with the media but to engage with society through the media. But I was also frustrated at some of the superficial hand-waving from policy makers towards media literacy and media education, seemingly without understanding what is involved or what the challenges are.

In our ever-more complex media and information environment, media literacy is being hailed as a silver bullet solution – hopefully to be dealt with by one-shot awareness-raising campaigns delivered by brand-promoting CSR departments, or by issuing vaguely-phrased high-handed injunctions to the (apparently unhearing and otherwise preoccupied) Department of Education. The motivation is rarely pedagogic but, rather, more the policy of ‘last resort.’

So, in the face of multiple problems of hate speech, or cyberbullying, or hacked YouTube content, or fake news etc., we are witnessing urgent calls to manage the media environment better – especially, to regulate the internet. But in the face of clashes of positive and negative rights, regulatory difficulties, powerful global companies and short-termist political expediency, this call in turn quickly morphs into a call for the supposedly ‘softer’ solution of educating the internet-using public.

Let me be clear. I am 100 per cent in favour of educating the public. I have devoted years to arguing for more and better media literacy. In this digital age, I believe media literacy’s time has come, and its advocates should grab the opportunity with both hands and advance the cause with all their energy.

But energy and enthusiasm are most effectively expended when the challenges to be met are properly recognised. So let me set these out, as I see them, lest our energies are wasted and the window of opportunity is lost.

Then there’s the challenges of the digital

It is, therefore, vital to set some priorities.

For the media literacy community itself, there’s some very real challenges of expertise and sustainability. These may be dull, or even invisible, to those calling for the silver bullet solution. But they matter.

Last but certainly not least, there’s the politics of media literacy

As Ioanna Noula recently put it, “by emphasising kindness and ethics, these approaches also undermine the value of conflict and dissent for the advancement of democracy” and they “decontextualise” citizenship such that “the attentions of concerned adults and youth alike are turned away from the social conditions that make young people vulnerable.” So instead of empowered media-literate citizens exercising their communicative entitlements, the emphasis becomes one of dutiful citizens, as part of a moralising discourse.

How can we turn things around?

I’ll make three suggestions, to end on a positive:

Before advocating for media literacy as part of a solution to the latest socio-technological ill, let’s take a holistic approach. This means, let’s get really clear what the problem is, and identify what role media or digital technologies play in that problem – if any! We might even ask for a “theory of change” to clarify how the different components of a potential solution are expected to work together. And, getting ambitious now, what about a responsible organisation – whether local, national or international – tasked with coordinating all these actions and evaluating the outcomes?

Then let’s figure out all the other players, so that we can articulate which part of the solution media literacy may provide, and what others will contribute – regulators, policy makers, civil society organisations, the media themselves – thereby avoiding the insidious tendency for the whole problem to get dumped at the feet of media educators. We might further expect – demand – that the other players should embed media literacy expectations into their very DNA, so that all organisations shaping the digital environment share the task of explaining their operation to the public and providing user-friendly mechanisms of accountability.

Last, let’s take the questions of value, empowerment and politics seriously. What does good look like? Is it dutiful citizens being kind to each other online, behaving nicely in an orderly fashion? Or is it deliberating, debating, even conflicting citizens? Citizens who express themselves through digital media, organise through digital media, protest to the authorities and insist on being heard? I think it should be the latter, not least because our societies are increasingly divided, angry and dis-empowered. It’s time that people are heard, and it’s time for the digital environment to live up to its democratising promise. But this requires change on behalf of the policy makers. We should not only ask whether people trust media, or trust the government. We should also ask whether the media trusts the people and treats them with respect. And whether governments and related authorities and civic bodies trust the people, treat them with respect, and hear what they say.

Sonia Livingstone, OBE, is professor of social psychology in the department of media and communications at LSE. She teaches master’s courses in media and communications theory, methods, and audiences and supervises doctoral students researching questions of audiences, publics and youth in the changing digital media landscape. She is author or editor of nineteen books and many academic articles and chapters. She has been visiting professor at the Universities of Bergen, Copenhagen, Harvard, Illinois, Milan, Oslo, Paris II, and Stockholm, and is on the editorial board of several leading journals. She is a fellow of the British Psychological Society, the Royal Society for the Arts, and fellow and past president of the International Communication Association, ICA. Sonia has received honorary doctorates from the University of Montreal and the Erasmus University of Rotterdam. She was awarded the title of Officer of the Order of the British Empire (OBE) in 2014 ‘for services to children and child internet safety.’