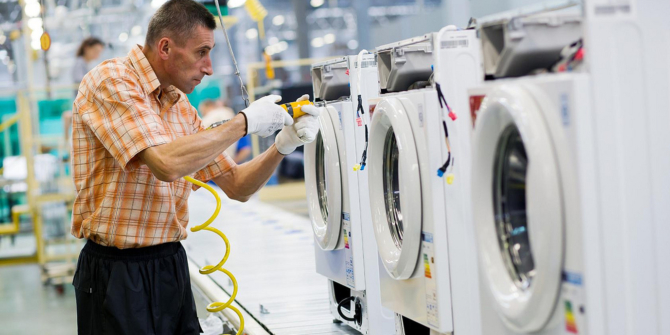 Industrial upgrading, which encompasses improvements in product quality, productivity and export performance among manufacturing firms, is a key driver of economic growth in developing and middle income countries. Yet despite its importance for policy choices, relatively little is known about the determinants of product upgrading at the micro level.

Our recent work aims to shed some light on this issue by examining whether the presence of multinational enterprises (MNEs) can stimulate complexity in new products introduced by domestic firms in the supplying industries. We focus on Turkey, a large middle-income country, which since the 2000s has been very successful at increasing the sophistication of its domestic production structure (see Figure 1). During the same time period, Turkey has also been increasingly exposed to the presence and activity of foreign investors. 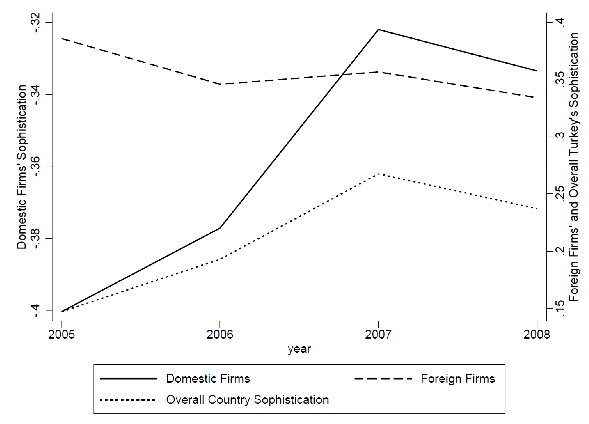 To use a Lego analogy: imagine that a bucket of Lego pieces represents a country’s capabilities endowment. The set of products (i.e., Lego models) a country can produce depends on the diversity and exclusivity of the Lego pieces in the bucket. A Lego bucket containing pieces to build a toy bicycle probably does not contain the pieces to create a toy car. However, a Lego bucket containing pieces for a toy car may also have the necessary pieces needed to build a toy bicycle. While two Lego buckets can build the same number of models, these may be completely different sets of models. Thus, determining the complexity of an economy by looking at the products it produces amounts to determining the diversity and exclusivity of pieces in a Lego bucket based on the Lego models it can build (see Hausmann and Hidalgo, 2009, for more details).

The complexity measure we compute reveals that a pot scourer is a less complex product than a stainless steel sink, which in turn is less complex than a flange of a washing machine basket (see Figure 2). A sink and a flange are both products with deep drawings, but a flange needs to be produced with a high level of precision and needs to be able to withstand the stress of 1,000 to 1,400 revolutions per minute while generating little vibration and noisiness. 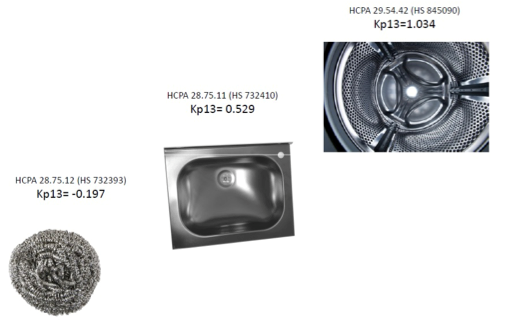 Source: BACI; authors’ calculations. Notes: HCPA is the product code. Kp13 refers to the standardised complexity indicator varying between -2.6 and 2.6.

Anecdotal evidence corroborates the view that foreign direct investment (FDI) may stimulate product upgrading in local firms in the supplying industries. Indesit Company, an Italian white goods producer – recently acquired by Whirlpool – active in Turkey since the 1990s is a case in point. In 2012, Indesit built a new plant to produce washing machines and worked with a local supplier to upgrade the supplier’s capabilities so that it was able to produce more complex components required by Indesit, such as, a flange of a washing machine basket. To become a supplier to Indesit, the local company invested in new presses and automation, while Indesit shared the essential tacit knowledge.

Inspired by anecdotal evidence, our study uses firm-product level panel data to examine the link between the presence of foreign firms and product upgrading by Turkish firms in the supplying sectors. The results suggest that the presence of foreign affiliates is positively correlated with the complexity of products newly introduced by Turkish firms active in the supplying industries and located in the same region. The estimated effect is economically meaningful: a 10-percentage-point increase in FDI in the relevant sectors implies local firms moving about halfway from the production of pot scourers to producing stainless steel sinks, while a 17-percentage-point increase implies moving from producing sinks to producing flanges. The analysis of the overall complexity of the Turkish firms’ portfolio delivers similar insights.

Our findings matter for policy. They suggest that policies aimed at attracting FDI may foster production upgrading in the supplying industries of the host country. And according to the existing literature, such upgrading may stimulate economic growth in the long run.

Beata Javorcik is a professor of economics at the University of Oxford. She is an international trade economist interested mainly in empirical work on policy-relevant questions. Her research programme focuses on identifying the policies through which developing countries can use international integration to facilitate their economic growth. Her research examines the determinants and consequences of inflows of foreign direct investment, the implications of services liberalisation for productivity growth, and ways of combating the evasion of import tariffs. She also investigated links between exporting and firm performance and strategies multi-product firms use to compete in international markets.

Alessia Lo Turco is an associate professor of economics at Università Politecnica delle Marche in Ancona, Italy. Her research  focuses on trade, firm production and innovation dynamics, and on the labour market effects of international trade.

Daniela Maggioni is an assistant professor of economics at Ca’ Foscari University in Venice, Italy. She holds a Ph.D. in Economics from the Marche Polytechnic University and teaches microeconomics and macroeconomics. Her research mainly focuses on international trade, economic geography and industry dynamics. In her recent work, she studied the effects of trade and FDI on innovation, the geographical evolution of the product space and the impact of religion on trade.