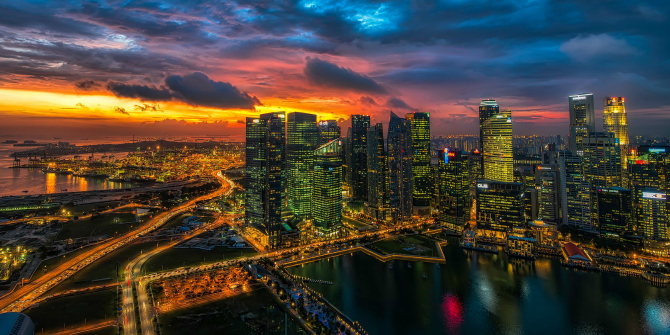 We are living in a truly urban world. The opening line of Shaping Cities in an Urban Age shows no doubt in stating that ‘urbanisation is one of the mega trends of the twenty-first century’ (8). Edited by Ricky Burdett and Philipp Rode and published by Phaidon Press in collaboration with LSE and the Alfred Herrhausen Gesellschaft, Shaping Cities in an Urban Age is part of the Urban Age project, which has been analysing urbanisation trends around the world in depth for over a decade, and marks the third book in the ‘Urban Age’ series, following The Endless City (2007) and Living in the Endless City (2011).

This richly illustrated book sheds light on the complex past and present set of forces that has been driving urban change, based on rigorous research in cities of the Global North and South. Guided by the quest to understand ‘the ‘‘how’’ of city making’ (14), the book considers the interlinked relations between urban form and urban society. It consists of data analysis, maps, graphs, photos and 37 essays written by leading policymakers, practitioners and scholars organised around five overarching topics: ‘Emergence’; ‘Power’; ‘Uncertainty’; ‘Constraints’; and ‘Intervention’. The book aims at bridging theory and practice by drawing the reader’s attention ‘to actionable solutions, helping shape the cities of today and tomorrow in a positive way’ (9).

The collection of essays brought together under the section titled ‘Emergence’ tells the stories of city life as encounters between its structured settings (plans, policies, etc) and ‘the spontaneous, unpredictable results created by individual elements working on their own prescribed logic’ (18). In his essay ‘Agency of Informality’, David Satterthwaite gives an overview of almost 50 years of government-led upgrading programmes in informal settlements in low- and middle-income countries as well as community-driven upgrading initiatives, drawing on examples from Asia, Latin America and Africa and reflecting on their strengths and limitations. The author argues such programmes would help to meet many of the United Nation’s Sustainable Development Goals, but nevertheless points to the difficulty of making national governments, urban policies and international funding agencies converge to support locally-driven upgrading.

The section on ‘Power’ invites the reader to reflect on how the ‘power structures at local and global levels shape cities, creating pockets of uneven development, social inequality and other disparities that lead governments and communities to take matters into their own hands’ (18). Saskia Sassen opens the section with her essay ‘Who Owns the City?’, which points to the ‘sharp rise in corporate buying of properties in most major cities of the world after the 2008 crisis’ (148). Figures speak for themselves, showing that the top 100 cities in the world ‘account for 10 per cent of the world’s population, but 30 per cent of the world’s Gross Domestic Product (GDP) and, even more shocking 76 per cent of the value of property acquisitions’ (152). These trends suggest ‘that we are actually seeing a systemic transformation in the pattern of land ownership and the spatial distribution of people’, leading Sassen to question what this case suggests about the production of inequality in cities.

The section on ‘Uncertainty’ portrays cities as ‘places where political, social, economic and environmental uncertainties collide’ (19). Closing this section, AbdouMaliq Simone tells the story of Kalibata City, ‘one of the most infamous vertical housing developments in Jakarta’ (251), described as a six-year-old housing complex already facing severe infrastructural problems and largely escaping official control whilst falling ‘under a kind of dictatorship of the developer’ (251). His essay illustrates how, in relation to this case:

“… everything is on hold, as are, seemingly, most residents’ lives. Not on hold in terms of their doing nothing, for they avidly pursue project after project. But, rather, on hold from either submitting themselves to a specific future or from resigning themselves to debilitating cynicism. They also are on hold because they do not know what will constitute effective political vernaculars, or what kind of mobilisations are possible (257).”

This powerful essay invites the reader to question ‘what disequilibrium as the new normal means for city dwellers worldwide’ (19).

The section titled ‘Constraints’ is made up of seven essays which shed light on the complex connections between the obstacles and limitations – such as resource management, climate change or urban livelihoods – that define a city’s trajectory. Eduarda La Rocque and Petras Shelton-Zumpano bring the discussion of constraints to Rio de Janeiro, a city characterised by its ‘fragmented social profile’, and argue that there are ‘important governance lessons to be learned from understanding the crisis that faced Rio in the run-up to the Olympics bid’ (308). Discussing the 2016 Summer Olympics experience, the authors advocate for ‘the need for more developed partnerships between the public and the private sectors in the city’ (19).

Since the aim of the Urban Age project is to promote ‘the application of research to practice’ (22), the section entitled ‘Intervention’ brings together a selection of essays written by policymakers, architects, urban planners and urban scholars involved in the conception and delivery of ‘significant urban interventions’ (22). Leading Chilean architect Alejandro Aravena makes a case for open incremental housing design, where self-construction is considered as part of the design and can be shaped according to the needs of its inhabitants. He powerfully argues that:

“in the end, what architects do is give form to the places where people live. That’s it. It’s no more complicated than that, but also no easier. Within this apparently inoffensive scope lies all the complexity of architecture and city design: life ranges from very basic needs to the most unspeakable dimensions and mysteries of the human condition (336).”

Shaping Cities in an Urban Age offers a broad in-depth analysis of the dynamics driving urban change today, taking the reader on an illustrated journey to the heart of cities from Delhi to London via Addis Ababa, Hong Kong and Johannesburg. The book is an insightful overview of the current and future dynamics that are shaping and will shape our urban world. The structure of the book, based around short essays, the impressive photos, maps and visual data, make it a very accessible read for both experts and novices. One could only wish that The Urban Age Series will add a fourth book to its collection in which more visual data from ‘off the map’ cities could be added to give a sense of how urbanisation dynamics are unfolding in less researched cities that are nevertheless forming an important part of our urban world. Shaping Cities in an Urban Age is a must-read not only for policymakers, urban scholars and students critically engaged with urban questions, but also for all of us, for whom ‘urban life has become the new normal’ (27), who wish to learn more about our increasingly urban world.

Laura Neville is a doctoral student in geography at the University of Lausanne. Her research is on politics of waste and politics of place in Cartagena, Colombia, where she studies solid waste management in relation to the city’s urbanisation dynamics. She holds an MSc in Urbanisation and Development from LSE and a master’s degree in anthropology and sociology from the Université Libre de Bruxelles.

Laura Neville is a doctoral student in geography at the University of Lausanne.