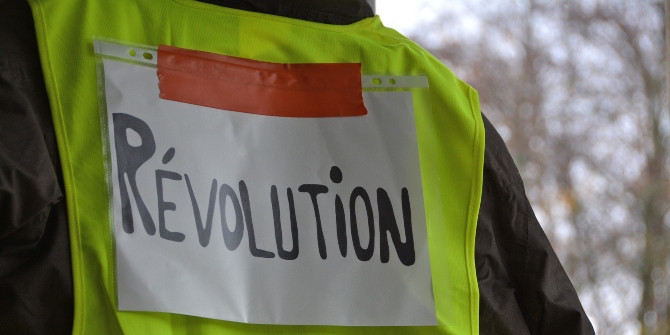 Technological change is profoundly transforming the world of work and creating substantial uncertainty about workers’ fortunes in the labour markets of tomorrow. In a recently published special issue, we study the political consequences of workplace automation and argue that the relationship between technological change and recent political disruptions in many West European countries deserves more attention.

We do not believe that Brexit, the gilets jaunes protests in France or the widespread success of radical right parties should be interpreted as mere “electoral accidents”. Instead, the current destructuring of political systems is connected to the profound transformation of labour markets in times of automation. Our core argument is that the specific distributive effects of current technological innovations are key to understanding their political implications: while other structural transformations, first of all globalisation, primarily hit low-skilled workers, the adverse consequences of technological change strongly affect the lower middle class.

The disadvantages of new technologies in the workplace are concentrated among middle-skilled routine workers (both in the manufacturing and service sectors) whose main tasks prove particularly susceptible to automation. In its pure form, this pattern of routine-biased technological change results in employment polarisation, characterised by a strong decline in routine jobs and growing opportunities in non-routine jobs at both ends of the skill and earnings distribution. While different institutional set-ups obviously create more or less pronounced patterns of polarisation, the “hollowing of the middle“ is strikingly consistent all across Europe (see Figure 1).

Figure 1. Relative changes in the employment structure across Europe 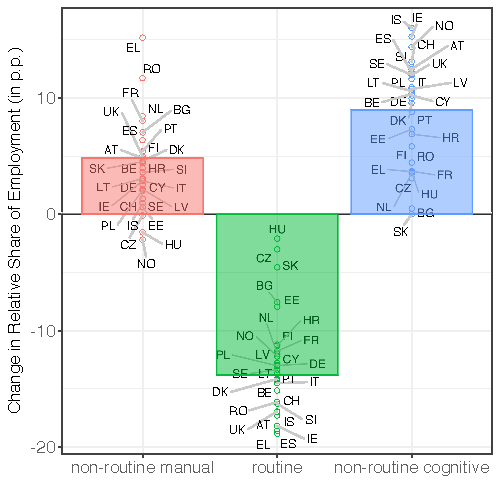 Increasingly bleak prospects in mid-skilled routine jobs in combination with even less attractive alternatives highlight the delicate situation of the lower middle class in times of automation. Yet, while fears of falling down the social scale are certainly well-founded, many routine workers actually manage to avoid the experience of economic hardship. Routine work often disappears through “natural turnover”, that is lower entry and higher exit rates, and only a minority effectively end up unemployed. Although “survivors” in routine work face economic stagnation compared to highly skilled and highly specialised non-routine workers who benefit from technological complementaries, they have and keep the traits of (former) labour market insiders with salaries above the lowest ones and with permanent job contracts. This aspect makes political repercussions highly likely. Routine workers are a large and electorally relevant group with the capacity to actively voice dissatisfaction in the political arena.

We contend that existing research has not sufficiently and systematically connected the distributive implications of technological change with contemporary changes in the political landscapes of post-industrial democracies. Standard approaches to examine political reactions to structural economic transformations are likely to fall short of providing encompassing answers given the unusual position of the losers in the (lower) middle. A focus on the usual indicators of economic disadvantage, e.g. low income, unemployment or precarious working conditions, will not fully capture routine workers’ grievances.

To give an example, the dualisation literature, one of the most influential strands of research in comparative political economy in recent years, is not well-suited to analysing the fate of routine workers. This is because it emphasises the problems of labour market outsiders without analysing the fears of the lower middle class (i.e. the fear of becoming an outsider). The relative economic decline of historically dominant core groups is a likely source of discontent and insecurity. As a consequence, we might not observe the strongest political reaction among the hardest-hit but rather among those who are most concerned about their economic well-being and future prospects in the labour market.

In line with other recent contributions on occupational change and the prevalence of robots, one of the articles in our special issue indeed provides empirical evidence that the risk of automation is positively related to support for social conservatism and support for the (populist) radical right. The people most likely to vote for these parties were most threatened by the automation of their jobs and had incomes that were just sufficient or short of carrying them through the end of the month. 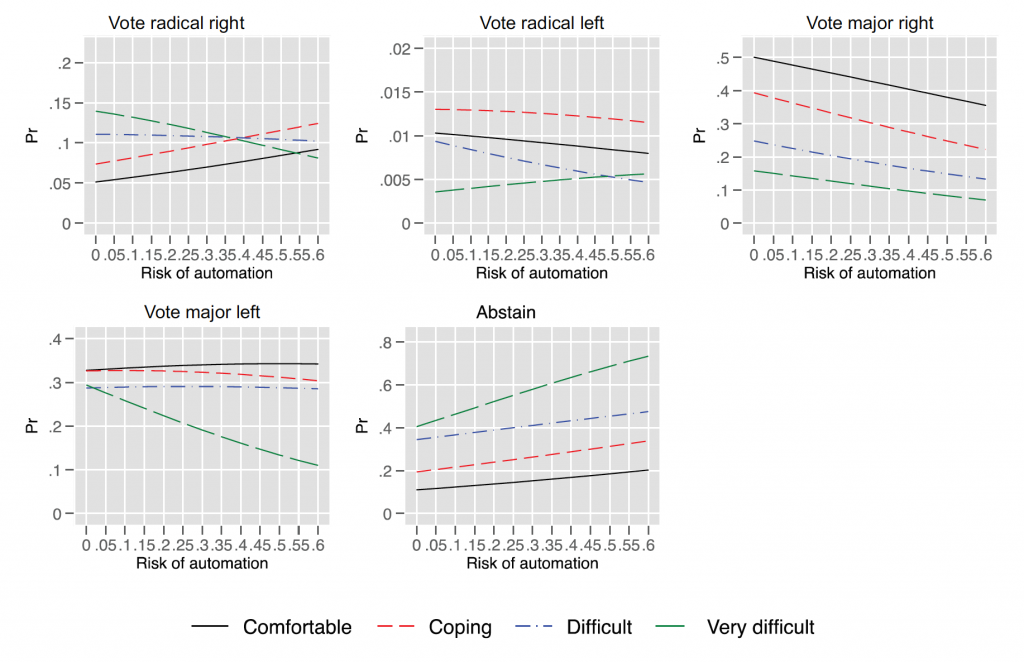 Note: Predicted probabilities of vote choice over risk of automation by feeling of Income security. Data Sources: data from rounds 6, 7 and 8 of the European Social Survey (ESS) and Arntz et al. (2016).

The political disruptions we currently observe around the world are thus a likely expression of fears revolving around workplace automation and economic modernisation. In contrast to what might have initially been expected, the pendulum has not swung back to the left. Instead, right-wing populist parties’ promises to turn back the clock seem to strike a chord with routine workers’ fears of social regression. More than the mainstream left and in fact more than any other party, political actors rooted in far-right challenger parties (or movements) have recognised the political relevance of a disaffected lower middle class. They explicitly acknowledge and address the widespread anxieties among the shrinking middle and thereby gain their support – despite the virtual absence of concrete policy remedies.

An important implication of the central role of relative economic decline and social status in routine workers’ election calculus is that political contestation tends to be skewed in favour of political challengers or newcomers. It is far from obvious which concrete policy response could mitigate the perceived decay of traditional values and the declining esteem of ordinary work. If routine workers’ grievances are not primarily about material concerns, expanding social security will be an ineffective remedy and mainstream parties will have a hard time satisfying routine workers’ demands.

Indeed, Jane Gingrich provides sobering evidence on mainstream parties’ limited leeway to compensate the losers of economic modernisation. This finding highlights the strategic disadvantage of responsible mainstream parties in competition with challenger parties that thrive on a less policy-based, less programmatic appearance, which makes it much easier to appeal to the subtle, perhaps slightly diffuse fears and demands of those fearing the negative consequences of technological change.

Thomas Kurer is a Weatherhead postdoctoral fellow at Harvard University. He studies political consequences of technological innovation and occupational change in post-industrial societies.

Bruno Palier is director of the Laboratory for Interdisciplinary Evaluation of Public Policies (LIEPP) and researcher at the Centre for European Studies and Comparative Politics at Sciences Po, Paris.