Making decisions about advanced technology boils down to whom you trust and what alternatives there are, writes Jonathan Liebenau 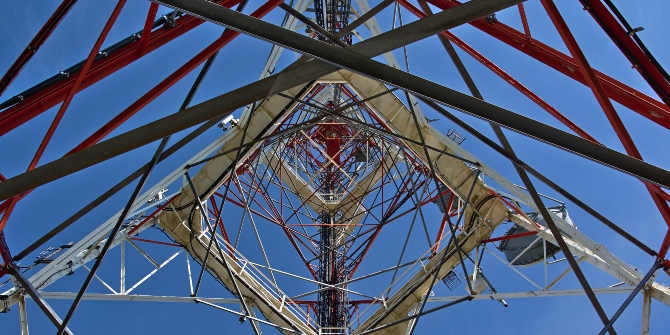 In recent weeks I have frequently been asked about what we should think about the policies and publicity that embroils Huawei. This is because I have been conducting research into them and many other Chinese digital economy companies for some years and have had unprecedented and greatly appreciated access to much of the company’s staff, records and facilities. The recent interest follows the decision to allow Huawei to sell equipment to UK telecommunications network operators up to a market share of 35%, which has brought relief to the industry as well as anger amongst those who either agree with claims that the company poses a threat or that countering the US position will provoke retaliation.

The outline history of the company is well known even if frequently misrepresented. It is a private company owned through an employee share ownership scheme, highly focused on its core competences and on its internal institutions. It has pioneered Chinese outward investment and grown rapidly to become a large employer (of around 194,000) and a keystone presence in Shenzhen as well as an employment catalyst elsewhere around the world. It is generally seen as the most desirable employer for aspirational Chinese university students and confers not only social status but also high salaries and perks. It is not, at least overtly (and I don’t believe covertly, either), state-owned, a tool of the Chinese Communist Party or of the People’s Liberation Army, or a snake-in-the-grass of Chinese imperialism. It does pay taxes and abides by corporate and other national laws of China as well as those of other countries where it has investments.

I have no insight as to whether it is or was culpable in violating sanctions against Iran or went beyond its business brief in supplying equipment known to be used in nefarious ways in the mass surveillance and repression of Muslim minorities in Xinjiang, whether it has been infiltrated by foreign or domestic agents, or whether certain details of its pension plan are defensible in Chinese courts. Some of this sort of information awaits the conclusion of investigative and court actions in China, Canada, the United States and elsewhere. However, from a background of corporate secrecy and impenetrability, Huawei is now an extraordinarily open and public relations-savvy company.

What we do know is that Huawei has long been in competition—and indeed in collaboration—with network equipment manufacturers around the world, most directly Ericsson, Nokia and its state-owned neighbour, ZTE. In some areas it has also been in competition with Samsung, Fujitsu, Alcatel-Lucent, and a few others around the world, plus the US companies Qualcomm, Juniper Networks and most especially Cisco. The failure of US companies to meet this competition has become a major concern with all kinds of discussion about how to regain technical supremacy, especially for Cisco. In its early years Huawei produced components that were at best modified versions of standard telecommunications infrastructure equipment such as switches and routers that were sold to the three main domestic network operators and then in emerging markets in Africa, Southeast Asia and elsewhere. Their aggressive outward expansion and vigour in meeting competition has been a strategic focus since the late 1990s. After it grew to considerable size as an infrastructure equipment manufacturer, it also successfully entered the smartphone market and subsequently developed a few other mass consumer goods including laptop computers, tablets and smart watches in competition with Apple, Samsung, Xiaomi and a few others.

Along with just about every innovative electronics company in the world, they have been embroiled in patent disputes and have frequently been presented as the model of Chinese violators of intellectual property rights. This is at least a misrepresentation of the ways in which patents have been used in China and it ignores the changes that have taken place over the history of Huawei. In the early years, patents were granted in China mainly to identify property rights in the context of domestic market exploitation and few were intended to express claims in competition with foreign-held patents. This principle is of course at variance with foreign ideas about what a world-wide monopoly on an invention is supposed to mean, but there were very few such clashes that had economic significance until recent times. Only slowly have Chinese legal institutions moved to act upon broad principles of intellectual property and that has primarily been motivated by the fact that now Chinese inventors want their rights defended both domestically and abroad.

Secondarily this has come to the fore because of pressure put on China in relation to terms of trade, but this has also been a factor from the perspective of innovative Chinese companies, such as Huawei, who have moved away from the position of technology followers. A further factor has been national policy to shift the whole of the Chinese patent system into one that more closely resembles those in the US, Europe and elsewhere and takes more seriously the basic tenets that a patent needs to be significantly novel. In the late 2000s The Economist claimed that only around 5% of Chinese patents would be defensible in a US or European court. Now, the vast majority of new Chinese patents are defensible and indeed Huawei has received US$1.4 billion in licensing revenue from foreign companies using their inventions. Since around 2000 they have also paid over US$6 billion in license fees to use others’ patents.

Now that Huawei and a few other Chinese high technology companies are market leaders, their perceptions of their commercial role and national context are changing. Having moved from a follower in mobile technologies to a leader in 5G (and likely beyond), Huawei is the best example of how long-term strategies to invest in leadership can pay off. In most areas of mobile infrastructure product development, Huawei was already near the state of the art by the mid 2000s. It was that confidence that led them to make the move into consumer products, something that they had long restrained themselves from. That coincided with the recognition that they could be capable of moving into higher value top quality products if they invested enough in research and development, a strategic move that they embarked on at a huge spending level in the late 2000s. This entailed not only building new R&D facilities but also shifting the balance of staff from production, sales and maintenance into engineering research, something that significantly changed the composition and ethos of the company.

Among the things that they were late in building capacity for, however, was in general lobbying and especially in fostering good relations with governments and regulators. This they have been trying to compensate for with increasing urgency in recent years. Part of taking on the technology leadership role has been in working with standards setting bodies. This has been received with mixed responses. Recognising that one motive for any company to engage with standards bodies is to promote their own preferences, many around the tables of international, trade and national standards committees were unsettled by the enthusiastic presence of Huawei. From the company’s perspective, it became more apparent that one appropriate response to international suspicion and accusations of nefarious intent would be to boost the role and rigour of standards bodies, especially with regard to security. In 2019 they made repeated calls for all network equipment manufacturers to submit their products to inspection by a neutral, technically sophisticated standards body focusing on the cybersecurity of telecommunications.

In Britain, there had been a very specific precedent to this in the form of a separate ‘Huawei Cyber Security Evaluation Centre’ in 2010 owned by Huawei but overseen by the UK General Communications Headquarters along with the National Cyber Security Centre and chaired by its chief executive. This body issues an annual report to the National Security Advisor of the United Kingdom detailing the technical qualities of Huawei equipment. Details about flaws in Huawei’s products and specific assessments of the potential for ‘back doors’ or exploitable software are investigated. While it is difficult to assess the exact relative dangers posed by various flaws and software glitches, as far as I can tell such flaws have been found occasionally in equipment and software from all major producers. So long as such bodies cannot prove malintent when flaws are revealed, or show that they have catastrophic potential, it is not possible to prove that Huawei products pose any specific cyber threat, or at least none that differentiates it from that of other manufacturers.

The overt criticisms of Huawei, especially from the US government, boil down to accusations of intellectual property infringement, unfair commercial practices, nefarious intent presumably in league with the Chinese government, its ruling Communist Party and the People’s Liberation Army. There is also the claim that even if none of these accusations are true, they could become true because of the specific threat that the Chinese government poses to rival countries. This, the claim goes, is rooted in the 2017 Chinese National Intelligence Law which has variously been interpreted as a specific obligation by individuals and entities in China to foster any action defined in terms of national security. When the leading international law firm Clifford Chance was hired by Huawei to comment on this they reported that there was no such broad legal interpretation. Furthermore, Huawei has repeatedly stated that they would not comply if asked to build in to products or use installed equipment for spying or cyberwarfare—they emphasise the obvious fact that this would thoroughly undermine their commercial credibility, at least abroad. As of yet there are no clear precedents of the Chinese authorities riding roughshod over companies in the way some people expect, but many would not be surprised if this did happen some day.

The UK government’s decision looks limiting and harsh, especially given the terminology classifying Huawei as a ‘high risk vendor’. However, it has been heralded as a victory for the company, especially as the limit of market share (35%) is set at about what Huawei might expect in the short term, depending on exactly how that market is defined. This process, along with the incarceration of Huawei’s chief financial officer in Canada and related actions abroad have pushed Huawei much closer to the Chinese government than is comfortable for them.

Nevertheless, the main lesson from this affair is that this, like so many conundrums about the commercial applications of advanced technology, is not going to be solved by recourse to engineering criteria. It boils down to a decision about who you trust and about what alternatives there are to meeting your interests. We don’t know if Huawei poses a threat and we won’t know until an Edward Snowden-like character emerges in China who shows that the Chinese government does with its digital economy companies what Snowden showed has been done in the United States. In the meantime, we can hope to benefit from the innovative outputs of Huawei and their economic benefits.

Jonathan Liebenau is an associate professor in technology management at LSE’s department of management. He specialises in fundamental concepts of information, and the problems and prospects of ICT in economic development. He has provided consultancy services to leading companies and strategic government agencies, including Dell, BT, IBM, Microsoft, TCS, Nortel, EDS, Lloyd Thompson, and in the UK Government, the Office of Science and Innovation, the Department of Trade and Industry and the Home Office.