In the public debate over central bank digital currencies (CBDCs), the design is often implicitly assumed or overlooked. We outline the main CBDC design features and assess how effective they are in achieving policymakers’ objectives.

CBDC sponsors’ arguments can be classified into three main groups. First is the need for a digital form of central bank liability to replace physical banknotes, which are slowly becoming obsolete in certain countries. In the words of Sweden’s central bank (Sverige Riksbank 2018): “If the marginalisation of cash continues, a digital krona, an e-krona, could ensure that the general public still has access to a state-guaranteed means of payment.” Broadly speaking, CBCD would provide a safe asset to the general public and foster financial stability (see Fatás and Weder di Mauro 2018, and Niepelt 2020).

The second argument concerns the effectiveness of monetary policy. While CBDC could strengthen existing tools, it could also open new (digital) channels by steering deposit interest rates, distribute helicopter money or, in extreme cases, grant loans to the private sector. This new toolkit might influence competition in the financial industry by changing the set of actors at play.

The third argument is more political. Issuing a CBDC strengthens monetary sovereignty and crowds out privately-run initiatives (e.g. see Niepelt 2019). For instance, the Bank of Japan is considering launching a CBDC to prevent the upcoming Chinese one from spreading in Japan. Authoritarian regimes would likely find CBDCs an appealing opportunity to strengthen their grasp over the economy with potentially undesirable outcomes (e.g. data privacy).

Achieving these objectives hinges on the CBDC design. We draw two key distinctions. The first is between token-based and account-based technologies, and the second is between single-tier and two-tier distribution systems.

In every payment transaction, the receiver needs to make sure that the payment is legit. With a token-based CBDC, she verifies the authenticity of the token, just like with physical banknotes. With an account-based CBDC, she verifies the identity of the payer and whether she holds an account, just like with credit cards. This difference is significant because the two models bear different economic implications. It would be problematic for the central bank to pay interests on a token-based CBDC, as it might affect the value of the token itself. Just like bonds with coupons, the value of the token would increase up to the scheduled interest payment and would diminish by the payment amount right after. Another difference is the possibility of offline payments and anonymity. Token-based CBDCs could be traded offline seamlessly, while account-based transactions could not be executed without the system remotely validating the identity of the account holder and her balance. While technical solutions can be implemented in order to protect users’ privacy, account-based CBDCs cannot allow for fully anonymous transactions. However, hybrid systems can be put in place with a token-based CBDC and a closed system of certified accounts, similarly to the Uruguay Central Bank experiment of 2018.

The distribution channels is also crucial. In a one-tier system, the CBDC is distributed by the central bank, which directly competes with the banking sector for deposits. This setup has clear scaling implications for the central bank, which would need a massive increase in size and scope. Arguably, such design would pose the problem of who is going to supply credit and complementary financial services. This would ascribe additional power to the central bank, that could easily compete away private banks. Furthermore, the central bank would have full visibility on payment data, allowing it to better calibrate its monetary policies but also posing privacy concerns. Alternatively, a two-tier system would involve some financial institutions (most likely banks) for the distribution of the CBDC. This would reduce the disintermediation concerns, by allowing banks to compete on complementary financial products and to maintain their customer base.

Brunnermeir and Niepelt (2019) argue that “the central bank could pass the funds through to commercial banks, effectively leaving the environment for banks completely unchanged”. This mechanism would be easy to implement in a two-tier distribution system, where funding could be allocated by the central bank according to the CBDC accounts/wallets held by each bank’s customers. On the other hand, with a one-tier distribution system, such fund reallocation is non-trivial as the central bank would need to come up with a potentially arbitrary criterion.

Loosely speaking, this design gives the greatest power to the central bank and could eventually lead to a quasi-nationalisation of the banking sector. If the central bank sets an interest rate on CBDC deposits which is comparable or higher than private banks’, it would be extremely hard for them to compete. Arguably, this system significantly increases monetary policy effectiveness as the central bank could, for instance, pay or charge an interest rate directly on people’s accounts. Potentially, this is the most disruptive (and unchartered) solution and it would require a massive effort by the central bank to be implemented. The central bank would need to build a client-facing infrastructure and deal with the stability risks that a deposit drain would pose on the banking sector. While this setting is the most direct way to supply outside money to the general public, it leaves many open questions. Will the central bank start to issue credit? If so, how would the screening be carried out? Or, if it does not, how would banks replace their deposit funding? Will the central bank directly fund the banks with its deposits? If so, with which criteria? Furthermore, who is going to provide other complementary financial services (e.g. investment solutions, credit cards etc.)? Fernández-Villaverde et al. (2020) focus on this scenario in their recent paper.

In this setting, banks would have CBDC accounts on their balance sheet (similar to the Chicago plan/ Vollgeld initiative). Concretely, they would offer a new kind of account to their clients along with their private products. The major difference between a CBDC account and a standard bank account would be that the former is public money, while the latter is private money. Even though banks cannot leverage on CBDC deposits to extend credit, they would still be able to supply complementary financial services to their customers. There would still be deposit substitution, but the private sector would have more leeway to keep/attract customers. The central bank could use its CBDC deposits to fund the banks, in so influencing lending to the private sector. This set up would strengthen monetary policy and discourage privately-run digital currency initiatives (e.g. Libra Association), but not as much as in the one-tier account-based scenario.

In a one-tier token-based design, the central bank directly provides digital wallets to the general public. Paying an interest or distributing helicopter money would necessarily require certified personal accounts and, therefore, a hybrid system. As tokens would be more expensive than bank deposits, it is reasonable to think that users would not keep more tokens than necessary for their daily activities, just like with physical banknotes or online payment services (e.g. Paypal). If this was the case, the impact on monetary policy would be marginal and, in normal times, interest paying bank deposits would still be appealing to the public.

This is undoubtedly the less disruptive scenario as it is the equivalent of having physical banknotes in a digital format. People are already used to purchasing (aka withdrawing) banknotes from their banks and a CBDC would be functionally identical. The tokens would be accounted on the central bank balance sheet as coins and banknotes are today. In this scenario, commercial banks would offer digital safes for storing the tokens, complementary services and use their customers’ payment data. As per the previous scenario, there is no reason to think that in normal times people would want to hold more tokens than necessary for everyday needs. It is unlikely that users will store locally significant amounts of tokens, for instance on their smartphones, as they might lose them with the device. Finally, it is worth noting that with such design it would be possible to implement a system of anonymous offline transactions.

While it is hard to forecast how the general public will react to the introduction of public digital money, in this article we outline a few baseline scenarios. These four cases give an idea of how design-dependent the implications of a CBDC may be. Token-based vs account-based and one-tier vs two-tier structures can make the difference between irrelevance and a seriously disruptive impact on the banking sector. For these reasons, we argue that it is always important to specify which kind of CBDC design one is assuming, as the devil lies in the details.

Tammaro Terracciano is a PhD candidate in economics with specialization in finance at the Swiss Finance Institute and at the Geneva Finance Research Institute – University of Geneva. His research interests concern international finance and macroeconomics. Further information can be found here: www.tammaroterracciano.com

Luciano Somoza is a PhD candidate in economics with specialization in finance at the Swiss Finance Institute and at HEC Lausanne, University of Lausanne. His research interests concern banking, financial regulation and fintech.  Further information can be found here: www.lucianosomoza.com 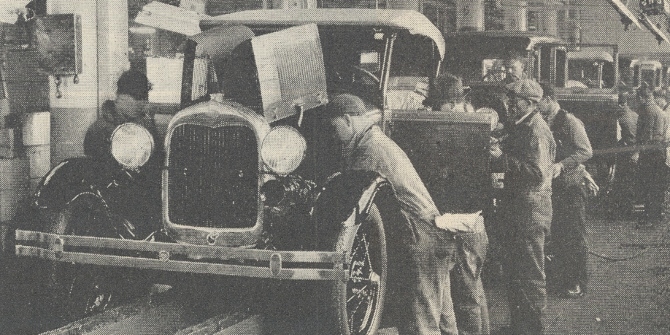