Governments resort to regulatory reform in difficult times, when their fiscal balances deteriorate. The COVID-19 crisis has already resulted in large fiscal deficits for 2020. These deficits are likely to worsen by the end of the year as social distancing rules stay into effect for a further period. Few firms can survive a protracted lockdown or collapsed revenues due to the uncertainty in demand that COVID-19 has brought. Governments have been called to the rescue of small, as well as large businesses. Social transfers have also ballooned, in an attempt to reserve the livelihood for large parts of the population. These actions mean one thing: large and persistent deficits in the years to come.

We test this hypothesis with global data and find that the post-COVID-19 period is indeed a propitious time to improve the regulatory environment for doing business.

Nearly 60% of countries in our sample register one or more reforms a year. About 30 per cent of countries in our sample implemented two or more reforms in a given year. Rwanda and Georgia lead the reform effort with a total of 62 and 51 reforms recorded since 2004. India and Kazakhstan share the third spot – with 48 reforms each. Only four economies globally (Kiribati, Libya, Somalia, South Sudan) have not implemented any reform. The incidence of reforms peaks in 2009, when the previous global crisis had gathered speed. That year a total number of 298 reforms were recorded, or about 1.5 reforms per country.

We relate the incidence of regulatory reforms with fiscal crisis variables. We construct a fiscal crisis indicator that equals one if a country experiences fiscal imbalance of more than 3 per cent in year t-1, and 0 otherwise. The distribution of fiscal imbalances is highly skewed, ranging from a deficit of 18% of GDP in Greece in 2009 and 32% of GDP in Ireland in 2010, to a surplus of 125% of GDP in São Tomé and Príncipe in 2007. The global economy is running a deficit during most of the sample period, reaching 3.6% of GDP in 2009, the trough year of the 2008-2013 financial crisis. The year 2020 promises to yield an even larger global deficit, given the extensive policy measures to ameliorate the effects of the health crisis on households and businesses. 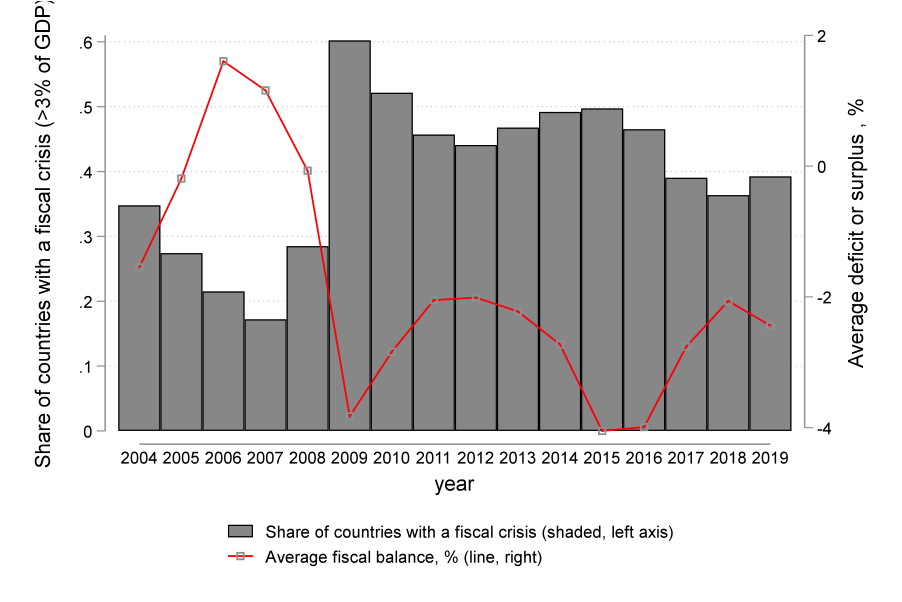 On balance, fiscal crises do encourage regulatory reform, as a way to speed up economic recovery. When we further distinguish across by type of reform, fiscal crises beget significant reforms in protecting investors, resolving bankruptcy, registering property and trading across borders. The result suggests that fiscal crisis appear to spur certain types of reforms more than others.

It is hard to look beyond the large negative effects from COVID-19 in terms of health outcomes, deterioration of livelihoods, and the struggle for survival of many businesses left without revenue. Once the recovery period starts, other issues come to the fore – the likely rise in inequality, a reversal in the trend of poverty reduction globally, over-indebtedness of sovereigns and corporates, among others.

Crises create reform opportunities as well. A small silver lining in the aftermath of COVID-19 is the possibility for governments to implement regulatory reform that eases the burden on businesses. We find some evidence to that effect from previous crisis periods, especially in countries whose neighbours reform too. The post-COVID-19 period will challenge politicians to choose among difficult options on how to revive the economy. Regulatory reform is among these options.

Dorina Georgieva is an economist at the World Bank Group. Her work focuses on business regulations, international trade and jobs. She has also worked at UNDP and the Institute of International Education. She holds a master’s degree from Johns Hopkins University.

Hibret Maemir is an economist at the World Bank. His research focuses on private sector development and international trade. He holds a Ph.D. in economics from Maastricht University.